Analysts see mainboard listings of Reits continuing in 2017, plus Catalist floats of tech firms and F&B firms
Melissa Tanmelissat@sph.com.sg@MelissaTanBT
A higher number of new initial public offerings (IPOs) on the Singapore Exchange (SGX) this year has not stemmed the shrinking of the local stock market.
PHOTO: BLOOMBERG

A HIGHER number of new initial public offerings (IPOs) on the Singapore Exchange (SGX) this year has not stemmed the shrinking of the local stock market. The total value of delistings easily outstripped the total value of new floats, and prominent privatisations included large government-linked companies and homegrown household names from the consumer sector.

Analysts largely shied away from predicting any marked improvement in Singapore IPOs next year, but did say they expect mainboard listings of real estate investment trusts (Reits) - particularly those holding assets outside Singapore - to continue, along with Catalist floats of tech companies and consumer food and beverage companies.

Infrastructure assets such as power generators could also go public, they noted. For instance, the market is already expecting local telco Singtel to list its broadband unit Netlink Trust around the second half of 2017 in a deal that could raise about US$2 billion.

But though the exit doors will likely still see some traffic, departures from the bourse next year will probably not be as severe as 2016's, market watchers said, adding that the oil and gas sector and real estate industry are likely to remain ripe for privatisations. 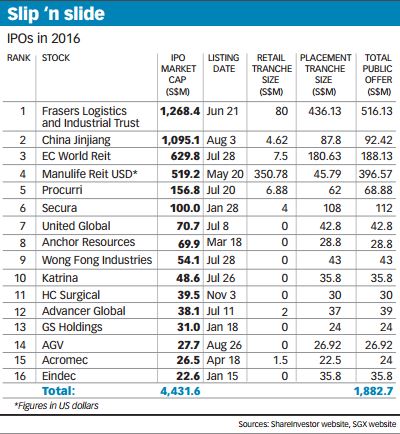 There were 16 IPOs on the Singapore Exchange (SGX) this year, made up of three Reits, two companies that went on the mainboard and 11 Catalist floats. These altogether raised over S$1.8 billion, up several times from the roughly S$339 million raised last year across 13 floats, according to data from the website of financial portal ShareInvestor.

The three Reits accounted for the bulk of IPO fundraising and the largest was Frasers Logistics & Industrial Trust, which raised about S$516 million from the public. It had an IPO market capitalisation of S$1.27 billion, according to the SGX website.

Despite the steep climb in fundraising figures this year, albeit from a low base, market watchers said the improvement might not have much momentum.

Stefanie Yuen Thio, joint managing director of law firm TSMP, said the IPO market for next year "still feels quiet". "With so much uncertainty in the global economy and with talk of China pulling back on overseas investments, nobody is rushing to list in Singapore."

But she added: "That said, 2016 was a year of freak results. Markets were slated to crash if (Donald) Trump won; instead we are now expecting a bull run in the US. Will this lead to a rise in markets everywhere or will the new administration slam down protectionist trade policies that hurt us more? Conventional wisdom no longer has a voice in this conversation."

The 16 IPOs this year had a combined market capitalisation at IPO of over S$4.4 billion, going by figures on the SGX website.

An SGX spokesman declined to provide a list of all the privatisations this year, but data compiled by The Business Times from bourse filings indicated that there have been 27, including one of a secondary listing. These wiped off a staggering estimated S$15.5 billion in total from the exchange, based on Bloomberg data on those counters' last available market caps as at their delisting date. The SGX spokesman did not dispute the numbers. 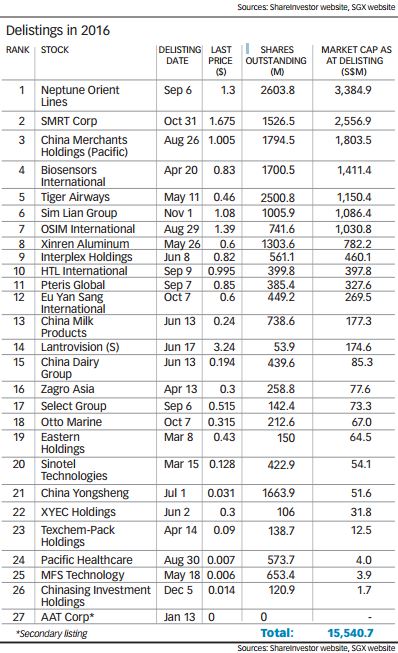 Felicity Chan, director of South-east Asia equity capital markets at Credit Suisse in Singapore, said she "would expect privatisations in sectors where valuations have come down and where the major shareholders see value well above the prevailing share price". In particular, the energy sector and oil and gas sector may see more delistings in 2017, she added.

Ms Yuen Thio said real estate-related stocks trading below net asset value or book value will continue to come under privatisation pressure. But she said she doubted the "wave of delistings Singapore saw in 2016 will continue".

"This year saw the confluence of the privatisation of NOL as well as the government taking back SMRT. I don't think we have comparable sized companies about to be delisted," she said.

"For businesses in the consumer sector, consolidation in times of slow growth could make sense," said Ernest Kan, deputy managing partner for markets at Deloitte Singapore. "For Eu Yan Sang, it was noted that its shares were thinly traded and not active on the stock market.

OSIM's delisting also alludes to the challenging retail environment with increasing competition in key markets such as China for their core business segment (massage equipment) and that the company is possibly looking to shift its focus to its F&B business via TWG in which OSIM has a stake."

Bankers and consultants reckon the IPO pipeline for next year will likely be dominated by Reits, business trusts and overseas firms, as the supply of sizeable Singapore assets that can be spun off or listed begins to run thin.

"We can expect to see continued interest in dividend yield plays," said Barry Lee, head of capital markets at KPMG in Singapore. "The bulk of the IPO fundraising will continue to centre around potential new Reit listings in 2017. There may also be more IPO fundraising opportunities for those in the infrastructure-related sector, such as power generation and telecommunication."

Ms Chan expects the arrival of more Reits as well as business trusts of asset classes that are new to the Singapore market, though she did not specify which classes.

Companies from "nearby frontier markets where local access to international capital is viewed as being more difficult to tap into" may decide to go public in Singapore, she added, though she did not name particular countries. "We may see pan-Asian businesses based in Singapore which previously may have been exploring a North Asian listing to reconsider an SGX listing as a possible option due to market volatility and a preference to list closer to home."

Ehren Vokes, HSBC's head of equity capital markets for South-east Asia, cautioned that the Singapore Reit market may be getting saturated.

"Reit listings will continue, but the challenge for new Reits looking to list in Singapore will be how to differentiate themselves in what is becoming an increasingly crowded field ... The investor base for Singapore-listed equities is vibrant and healthy, but the supply of exciting new companies looking to list here has been somewhat limited in recent years."

Market watchers said they expect the junior Catalist bourse to get more tech-related and consumer-related firms. "There is a lot of interest in the growing technology space ... we may start to see certain private equity and venture capital investments made in the past years looking for possible exits," Mr Lee said.

"For consumer-related IPOs, they are generally more easily understood by investors and also generally viewed as recession-proof."

Mohamed Nasser Ismail, SGX's head of capital market development and head of equity capital markets for small and medium enterprises, told a media briefing in early December that Catalist has at least four technology company listings already lined up for the first half of next year.

[KUALA LUMPUR] Malaysia granted an interim order to prevent US$340 million of funds allegedly linked to 1MDB from...

[SINGAPORE] An Indian lender has seen its shares surge during the coronavirus pandemic, in a stark contrast with...

Some BTO flats may be delayed up to nine months: HDB

[SINGAPORE] Retail sales assistant Joyce Loh and her husband were supposed to get the keys to their new Build-To-...

Tokyo: Stocks close down on fresh virus surge in capital

[TOKYO] Tokyo stocks closed lower on Thursday as market sentiment worsened after the capital's governor warned of a...

THERE is "substantial uncertainty" over the global economic outlook amid the Covid-19 crisis, said Monetary...