SGX to Best World: Is main customer in China a related party?

Firm had declared Changsha Best an independent party in offensive against short-seller; separate report says Dora Hoan's brother-in-law is behind it
Marissa Leemarilee@sph.com.sg@MarissaLeeBT
Vivienne Tayvtay@sph.com.sg@VivienneTayBT
The battle between Best World International and its short-sellers resumed in full force on Thursday, until the regulatory arm of the Singapore Exchange (SGX) punched down on the pause button and ordered Best World to set the facts straight.
PHOTO: BEST WORLD INTERNATIONAL

THE battle between Best World International and its short-sellers resumed in full force on Thursday, until the regulatory arm of the Singapore Exchange (SGX) punched down on the pause button and ordered Best World to set the facts straight.

The morning began with Best World coming out of a two-week trading halt to say that it strongly refutes false allegations about its China business that were made by professional short-seller Bonitas Research on April 24.

Bonitas had said it doubted that Best World's main customer in China in 2017 was an independent party. Bonitas identified this customer as Changsha Best.

Best World said on Thursday morning that Changsha Best was indeed its primary import agent, and vouched for its independence: "None of the group, the directors, the substantial shareholders of the company or their associates have had any direct or indirect shareholding interests, directorship or management role in the primary import agent."

SGX holds first virtual AGM in under an hour

But 45 minutes after the opening bell rang, an anonymous report surfaced that suggested otherwise.

The report, this time from a group that calls itself Valiant Varriors, linked Changsha Best to a person named Koh Kim Chuan. A man who goes by the same name is married to Mary Huan, believed to be the sister of Best World co-founder Dora Hoan, the report said. Attached were photos from Mary Huan's Facebook album that featured Dora Hoan.

Asked by The Business Times to clarify the connection, a spokesman for Best World said: "The company is reviewing the report."

At 2.30pm, Bonitas published its own rebuttal to Best World.

The SGX said in a statement at 4.33pm: "SGX RegCo has suspended trading in the shares of Best World with effect from 3.14pm today pending our investigations into the accuracy of the company's May 9 announcement titled Best World International Limited strongly refutes Bonitas research report.

"Trading suspension will continue until we have completed our investigations into the veracity of the company's China sales." 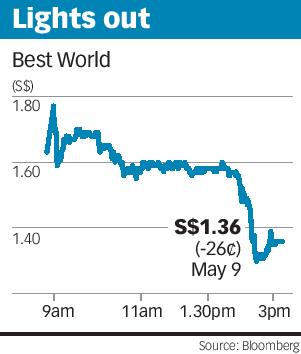 The SGX has the authority to suspend trading when it is in the interest of maintaining a fair, orderly and transparent market.

The SGX has also sent its own queries to Best World and wants them answered by Friday.

"Please confirm if Koh Kim Chuan, shareholder and legal representative of Changsha Best ... is the brother-in-law of Dora Hoan," the SGX wrote in a public filing.

"Please state the board's basis for the statement that the primary import agent is an independent party of the group," it added.

Best World shares fell 16 per cent or 26 Singapore cents to S$1.36 on Thursday before trading was suspended. Out of a volume of 28.8 million, 8.1 million shares were sold short.

One trader told BT that the earlier trading halt could have added to the selling momentum: "Best World had been halted for trading since April 24, a total of nine days without trading activities. This means that those contra players who made a purchase from April 18 onwards were not able to sell their shares until today.

Meanwhile, Best World said that it has commenced defamation proceedings against Bonitas and its founder Matthew Wiechert in the High Court of Singapore.

Bonitas made false allegations against Best World in its first report about the accounting behind the premium skincare firm's profits and its sales practices in China, Best World said in its 40-page filing on Thursday. "The company strongly urges its shareholders and potential investors not to be deceived by the report, which has undermined confidence in the group."

Bonitas stands by its opinion, he said. "We have not been contacted by anyone yet, but in the event that we are mentioned in a defamation claim, we are ready with an exhaustive list of internal discovery document requests for Best World which we expect will only corroborate publicly available findings."

When approached, Best World said the litigation lawyers acting for the group, Allen & Gledhill LLP, are in the process of obtaining the requisite court order(s) to serve the papers on the defendants who are not resident in Singapore.

Best World's filing on Thursday included a point-by-point rebuttal of several issues highlighted in the Bonitas report, which Best World says is untrue.

Bonitas alleged that the company had intentionally limited the scope of an independent review being conducted by PwC to divert attention from its financial reports in China in 2017.

Best World said this allegation is absurd: "The review was voluntarily commissioned by the company in response to The Business Times article published on Feb 18.

"As the article focused on the franchise model in China, which the group transitioned to in June 2018, there was no reason for the scope of the review to be extended to cover the export model before 2018."

Best World's 2017 financial statements were also audited by EY, and the auditors provided an unqualified opinion, the company said.

Neither RSM nor EY have withdrawn their unqualified audit opinions after reviewing the Bonitas report and Best World's clarifications, it added.

Bonitas also compared Best World's distribution and commission structure under the franchise model to direct selling. Best World is not licensed to conduct direct selling for its skincare products in China.

Best World clarified that it did not pay any bonuses to "member reps" for recruitment of other member reps in China or any market in which it operates.

In February, responding to the BT article headlined Sales of DR's Secret in China: Best World's best-kept secret?, Best World told shareholders that it had conducted its business ethically and in compliance with applicable laws, although it acknowledged limited oversight and responsibility over its franchisees.

Best World sells its DR's Secret line of skincare products in China, the firm's biggest market. The goods are manufactured outside China and imported by a licensed entity. They are then sold to individual consumers via 33 franchisees under a "social selling" model.

MAINBOARD-listed Addvalue Technologies is in favour of raising funds through private placements given that it is...

HONG Leong Holdings sold 341 units of its 566-unit Penrose condominium over the weekend as at 5pm on Sunday.

THE acquisition of Thye Hong Centre by Lian Beng's subsidiary SLB Development had raised questions over whether the...

15 new coronavirus cases in Singapore, none in community