IN response to the Singapore Exchange's (SGX) queries, Perennial Real Estate on Wednesday night disclosed that the shareholders' loan, half of which will be transferred to Alibaba Singapore, has S$364.7 million outstanding.

The subsidiary of Chinese e-commerce giant Alibaba Group is looking to acquire 50 per cent equity interest in AXA Tower from a Perennial-led consortium, before the parties form a joint venture to redevelop the building.

The consideration payable for the half stake will be calculated based on the net asset value of Perennial Shenton Holding Pte Ltd (PSHPL) - which indirectly owns AXA Tower - at the deal's close, and based on an agreed property value of S$1.68 billion.

Meanwhile, the consideration for the transfer of half of the shareholders' loan to Alibaba Singapore will be 50 per cent of the principal outstanding as at closing, Perennial had announced on May 6 without disclosing the size of the loan.

Aside from Perennial Real Estate, the other investors in the existing consortium - which is named Perennial Shenton Investors (PSI) - include Singapore Press Holdings (SPH), HPRY Holdings and Piermont Holdings.

With the consortium's half stake in PSHPL sold to Alibaba, the remaining half of shares as well as the other half of the shareholders' loan will be transferred to a new consortium (NewCo) made up of the same investors in the initial PSI consortium but with different shareholding proportions.

Asked by SGX about the rationale for the formation of NewCo, Perennial said NewCo was formed to address the changes in shareholding proportions, as the existing consortium's shareholders have different risk appetites and investment limits to invest in the redevelopment project.

In addition, the stake sale involves providing the usual indemnities and warranties, and due to the changes in shareholding it is necessary to separate the investment entity for the redevelopment from the existing PSI consortium, which is the seller and taking on the warranties and indemnities to Alibaba Singapore. 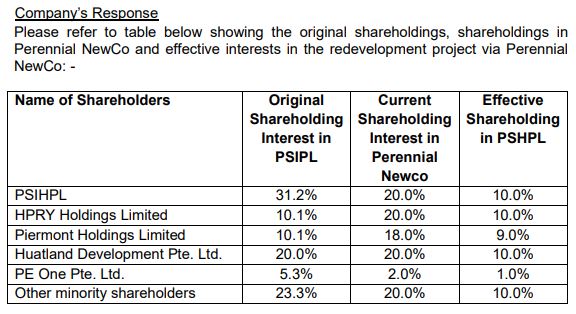 Perennial on Wednesday also said it will use the net cash proceeds from selling its net 21.2 per cent interest in AXA Tower to pare the company’s borrowings.

The company responded to SGX that it will receive about S$196.4 million in net proceeds from the 31.2 per cent stake sale, based on the balance sheet as at Dec 31, 2019 and the agreed property price of S$1.68 billion.

Afterwards, Perennial will inject about S$58.8 million in cash to own 20 per cent of NewCo which will thus give Perennial a 10 per cent effective interest in the AXA Tower redevelopment project.

The company also clarified the shareholding proportions before and after the divestment.

[KUALA LUMPUR] Malaysia's economy contracted by the most since the Asian financial crisis more than two decades ago...

[SINGAPORE] In the early weeks of the coronavirus outbreak, Anthony Tan, the chief executive officer of South-east...