In addition to recent cash call, group is also exploring other sources of funding, including secured financing, sale-and-leaseback transactions
Marissa Leemarilee@sph.com.sg@MarissaLeeBT
SIA sees no visibility on the timing or trajectory of an aviation recovery at this point as there are few signs of an abatement in the Covid-19 pandemic.
PHOTO: REUTERS

SINGAPORE Airlines (SIA) has posted a net loss of S$732.4 million in the fourth quarter, reversing from a net profit of S$202.6 million in the same period a year earlier.

This included S$198 million in fuel hedging losses as fuel prices plunged towards the end of the quarter.

SIA also booked S$710 million in mark-to-market losses from surplus hedges that arose because capacity cuts resulting from Covid-19 have meant that the carrier's fuel consumption needs in the next fiscal year will be lower than previously anticipated.

The carrier also warned of further fuel hedging losses ahead, noting that "fuel prices are likely to remain weak in the near term".

Revenue in the three months to March 31 fell 21.9 per cent to S$3.18 billion, owing to a steep drop in passenger traffic. 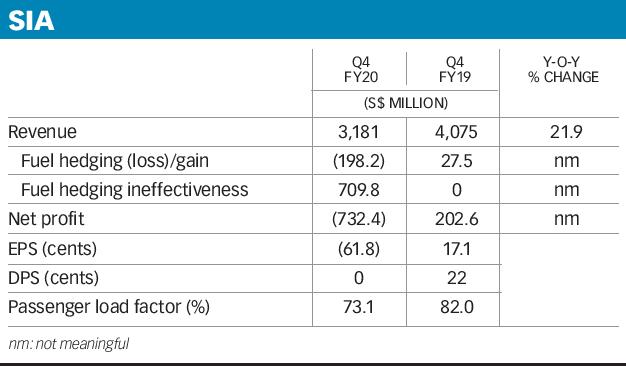 The group swung into an operating loss of S$803 million in Q4, from profits of S$253 million a year ago.

Passenger revenue fell 27.4 per cent, while cargo revenue was down slightly by 4 per cent as the sharp drop in bellyhold capacity arising from the reduction in passenger flights was only partially mitigated by the increased utilisation of freighter aircraft and the operation of cargo-only flights using passenger aircraft.

Parent airline SIA incurred a S$583 million operating loss in Q4, reversing from an operating profit of S$204 million in the same period a year earlier.

Scoot reported an operating deficit of S$125 million, deepening from a loss of S$6 million in Q4 last year.

For the 12 months ended March 31, SIA posted a net loss of S$212 million, reversing from a net profit of S$683 million in the same period a year earlier. This is SIA's first annual loss in history.

Operating profit was S$59 million, down 94.5 per cent from S$1.07 billion last year as the weaker performance from January to March eroded the improvements made in the first nine months of the year, SIA said.

On March 26, SIA announced a right issue to raise gross proceeds of S$8.8 billion through the sale of rights shares and rights mandatory convertible bonds (MCBs). SIA also has the option of issuing up to an additional S$6.2 billion through additional MCBs.

SIA said in its results filing on Thursday: "This is intended to provide the group with additional liquidity if the crisis prolongs, and would only be tapped if necessary. We are currently exploring other sources of funding, including secured financing and sale-and-leaseback transactions."

SIA added: "The prospects for a recovery in international air travel in the months ahead depend upon when border controls and travel restrictions ease. There is no visibility on the timing or trajectory of the recovery at this point, however, as there are few signs of an abatement in the Covid-19 pandemic."

The group said it will maintain a minimum flight connectivity within its network during this period, while ensuring the flexibility to scale up capacity if there is an uptick in demand.

"In the meantime, the demand for essential goods such as medical supplies, pharmaceuticals and fresh foods still exceeds air freight capacity on many key lanes due to the sharp reduction in bellyhold capacity. This is expected to sustain cargo revenues for the near term. We will also continue to pursue charter opportunities, while closely monitoring for changes in demand," SIA said.

SIA shares fell 19 Singapore cents or 4.75 per cent to S$3.81 on Thursday before the results were announced.

Broker's take: DBS says worst appears to be over for Sunpower, upgrades to 'buy'

DBS Group Research has upgraded Sunpower Group to "buy" from "hold with a raised target price of S$0.69 from S$0.49...

Tivoli Lodge condo in Geylang up for collective sale with S$17.3m guide price

FREEHOLD residential development Tivoli Lodge has entered private treaty on Friday - after having been launched for...