Singapore firms to ride out Brexit with eye on buy opportunities

Companies say diversification also minimises impact from their UK exposure
Lynette Tantanlyn@sph.com.sg@LynetteTanBT
The odds of a no-deal Brexit have been kicked up a notch but Singapore property players with exposure to the UK market are not fretting over it, with a few even eyeing opportunities amid the turbulence.
PHOTO: REUTERS

AS UK lawmakers reject a no-deal Brexit, Singapore property players with exposure to the UK market are taking the uncertainties in stride, with a few even eyeing opportunities amid the turbulence.

To be clear, none of them likes the persistent murkiness of the Brexit situation, which Ho Bee Land described as "festering uncertainty with no end in sight", and some are starting to feel slight pressure in parts of their businesses.

However, the firms maintain that factors like solid leases, diversification and fundamental demand will stand them in good stead in the longer run.

For example, Ho Bee Land, which has seven commercial buildings in London in its portfolio, emphasised that Brexit would have minimal impact on its investments in the short term as its offices are fully leased to tenants with good covenants, and on leases averaging more than five years. The company also hedges its currency exposure to the British pound.

In fact, for a few keen property players, the Brexit chaos might offer shopping opportunities. Ho Bee Land is one of them.

"We will continue exploring the London market for opportunities as during this period of uncertainty, more compelling deals may emerge," said the group.

Another is property developer City Developments Ltd (CDL), which is part of the Hong Leong Group. "The short-term uncertainties surrounding Brexit have presented the group with off-market opportunities to acquire high performance assets with deep value," it said.

Meanwhile, asset players like Ascott Residence Trust and Hong Leong Group are balancing out their UK interests by diversifying into other markets.

Beh Siew Kim, chief executive at Ascott Residence Trust - which operates four serviced residences in London - maintained that the trust's properties are "well-diversified" across geographies including the UK, France, Germany, Belgium and Spain.

Thus, with the UK contributing just 9 per cent of the trust's gross profit as at the end of last December, the impact of Brexit would not be significant, she said.

Likewise, Hong Leong Group operates 23 hotels in the UK under the Millennium Hotels and Resorts brand with sister company CDL Hospitality Trusts, but has diversified into other overseas markets like Australia, China, Japan and the US. At the end of last year, CDL's UK business formed 15 per cent of its assets and 8 per cent of revenue.

Some property firms, like Centurion Corp, are also looking past short-term fluctuations to focus on underlying demand driving particular segments.

Centurion Corp operates student accommodation across the UK and its chief executive Kong Chee Min is seeing continued institutional interest in the asset class, with "corresponding compression in yields and strong valuation gains for our portfolio of properties". 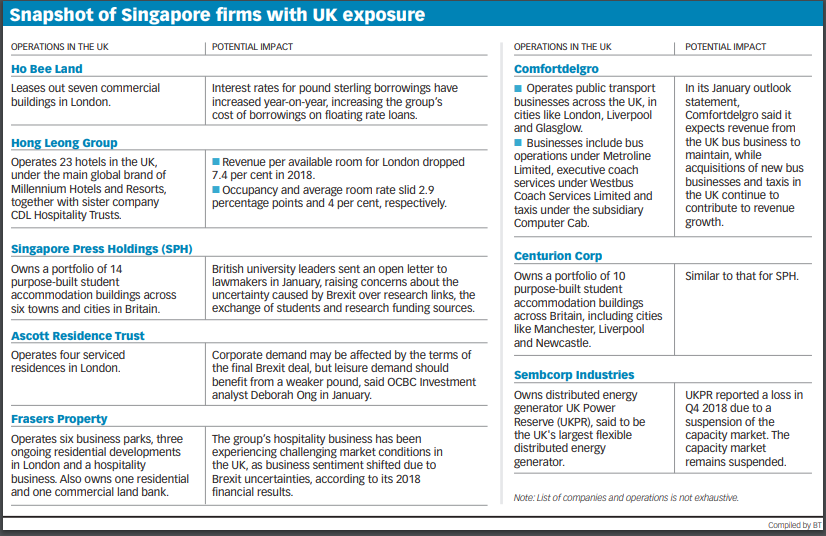 In that vein, Singapore Press Holdings (SPH), which owns The Business Times, also said it will continue to invest in student accommodation in the UK and pointed to an "extensive deal pipeline for further acquisitions".

"We continue to actively monitor the ongoing developments of Brexit and the potential implications it may have on our operations in the UK. Our approach remains consistent, to invest in defensive assets and sectors such as the student accommodation which will drive recurring income for the group," said SPH. "We continue to adopt a disciplined approach to review our extensive deal pipeline for further acquisitions with the objective to build this to a platform of scale."

Analysts are largely confident that the firms will remain steady. OCBC Investment analyst Deborah Ong kept her "buy" call on Ascott Residence Trust. In January, she said that it may see corporate demand affected by the terms of the final Brexit deal, but leisure demand should benefit from a weaker pound.

OCBC's Joseph Ng has a "hold" on SPH and believes it is highly likely the group will continue to bulk up on its UK student accommodation portfolio.