HOBBLED by its share of a key associate's provision for sums claimed by the Indian government, mainboard-listed telco Singtel posted a historic first quarterly loss on Thursday.

Still, citing the free cash flow position, group chief executive Chua Sock Koong told a briefing that Singtel stands by a dividend policy of 17.5 Singapore cents a share for the year to March 31, 2020.

The policy for the next financial year will be released with the group's fourth-quarter results.

Singtel ran up a second-quarter net loss of S$668 million for the three months to Sept 30, against profit of S$667 million before, after what Ms Chua called "an unprecedented, surprise announcement from the Supreme Court" in India last month that ordered telecom operators to pay the state billions in past dues - for which Bharti Airtel has booked an exceptional provision of S$5.49 billion. Singtel took on a S$1.93 billion pre-tax share of Bharti Airtel's provision.

Excluding Bharti Airtel, net profit would have been up 4 per cent year on year, going by the results released after the market close, even as revenue slid by 2.8 per cent to S$4.15 billion.

Singtel chief financial officer Lim Cheng Cheng said that the revision in revenue outlook came on the back of "the challenge that we face in Australia from the enterprise business, so that was a substantial downdraught for the group enterprise numbers", as well as NBN migration impact.

But, despite the Bharti Airtel provision, Ms Chua said that "we expect the full year to return to profit". Full-year capital expenditure is expected to be around S$2.1 billion, and Singtel will continue to invest in areas such as its core networks and readiness for the upcoming 5G wireless roll-out.

Operators have until next January to submit proposals for the two nationwide and two smaller-scale 5G licences on the table. Ms Chua said at the briefing that "we would have to go for a nationwide licence - although I'm stating that before we're submitting our final proposal".

Meanwhile, she demurred on the market chatter about Singtel's appetite for the five digital bank licences that are up for grabs in the Republic. It had earlier been rumoured that the telco would throw its hat in the ring with OCBC Bank, but OCBC has since been linked to a consortium that would comprise Keppel Corp, peer-to-peer lender Validus Capital, and venture capital fund Vertex Ventures. 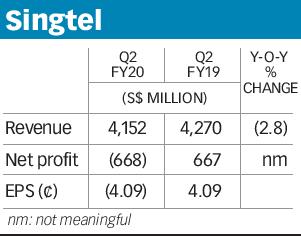 Now, with the Dec 31 application deadline looming, Ms Chua said Singtel is still reviewing a digital bank opportunity, but "we are very attractive to a lot of partners, so a lot of people have been talking to us".

To a question on whether Singtel had foreseen the hefty provision on the Indian court judgment, she said: "No, because this case has been going on for 14 years and the final outcome ... was different from all the previous outcomes."

But she added that "there may be improvement from the numbers that have been provided so far" if the state offers telcos relief on the penalty sums or interest, or allows deferred payment.

On a six-month basis, Singtel reported a net loss of S$127 million, against a profit of S$1.5 billion before; its revenue declined by 1.7 per cent to S$8.27 billion.