ST Group Food IPO: Another F&B play, but with a foreign slant

While the group holds licensing rights to familiar brands like Hokkaido Baked Cheese Tart, its outlets are all outside of Singapore
Jaira Kohkohjaira@gmail.com
ST Group Food Industries outlets are mainly in Australia, New Zealand and Malaysia - with none in Singapore. It holds exclusive regional franchise and licence rights for brands like PappaRich.
BT FILE PHOTO

What’s on the menu for F&B investors

HAVING priced its initial public offering (IPO) at S$0.26 apiece, ST Group Food Industries will land somewhere in the middle of a crowded table of existing food and beverage (F&B) offerings.

Unlike the competition, however, this latest listing's outlets are mainly in Australia, New Zealand and Malaysia - with none in Singapore.

The group holds exclusive regional franchise and licence rights for brands like PappaRich, NeNe Chicken and Hokkaido Baked Cheese Tart. Based on the F&B franchisee's final offer document, its price-to-earnings ratio of 20 is in line with comparable companies.

The Singapore Exchange (SGX) has had eight F&B listings since 2015, with four listings in the last two years. They added a market capitalisation of more than S$1.1 billion to SGX and raised a total of S$218 million in capital.

No Signboard Holdings, RE&S Holdings and Kimly group all made their debut on the Catalist board of the Singapore Exchange in 2017, while Koufu Group was listed in July 2018. Investors appear to have plenty of appetite for the busy sector.

"The most actively traded of the Singapore-based F&B mid-to-small cap stocks, Koufu Group has a market value of S$375 million and averaged a daily trading turnover of close to S$1 million over the first five months of 2019," said SGX market strategist Geoff Howie.

Jumbo Group, BreadTalk Group and Kimly Group all place within the top 200 stocks by market value as well as daily trading turnover.

Some market observers are optimistic about the F&B sector in Singapore. While the closure of some Michelin star restaurants may be a sign of strain in the high-end segment, F&B should continue to thrive as consumers shift to the mass-market sector, according to DBS Group Research analyst Alfie Yeo. 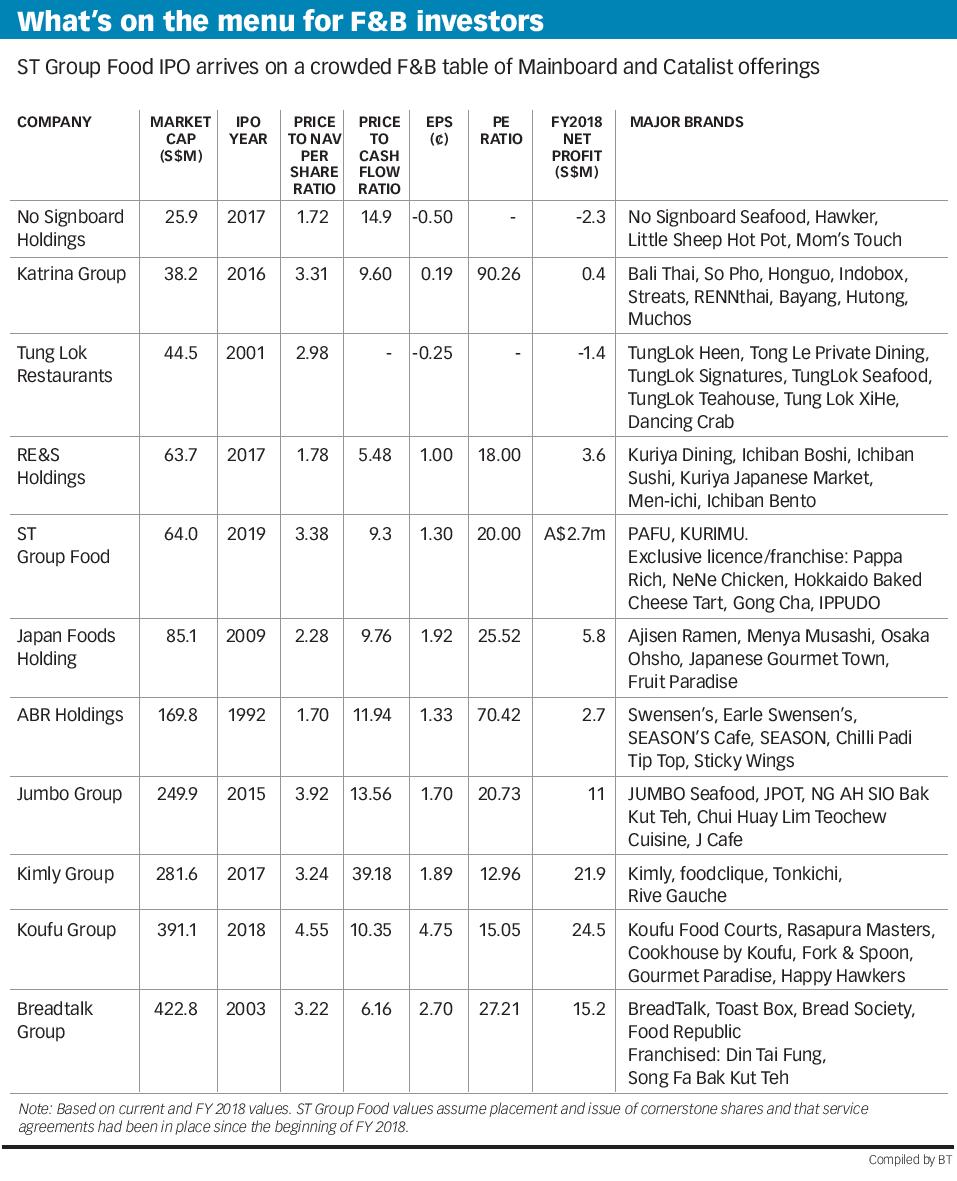 ST Group, however, does not yet operate in Singapore. The group runs 80 franchise outlets in Australia, 13 in New Zealand and eight in Malaysia. Its IPO prospectus has "identified Singapore as a potential market for business expansion".

Comparing the firm to listed F&B companies that operate in Singapore may therefore be less than an apples-to-apples comparison. Only BreadTalk has an overseas presence that outweighs its Singapore operations, and even then its bakery division alone operates over 100 outlets in Singapore.

While this makes ST Group an atypical F&B play for investors, an analyst noted that forex issues could be a concern. The franchise operator will be raising capital here but expanding its central kitchen and corporate office in Australia, for example.

Its IPO has raised S$9.6 million, following the successful placement of 30.1 million shares and the issuance of 6.9 million new shares to cornerstone investors, the group announced on Wednesday. There was no public offer.

IPO expenses will eat up S$3.4 million of that sum, a significant amount considering the group's relatively small earnings base, an analyst said. In FY 2018, the firm made a net profit of A$2.7 million (S$2.56 million).

In the same year, No Signboard debuted on Catalist and recorded a S$S2.4 million net loss that the firm's chairman attributed to S$1.1 million of IPO expenses and S$4.3 million of asset impairments.

United Overseas Bank is the sponsor and placement agent for ST Group's IPO. The shares are expected to commence trading on July 3.

[NEW YORK] Ellis Marsalis, a pianist and educator who was the guiding force behind a late-20th-century resurgence in...

[WASHINGTON] The main US disaster response agency has asked the Defence Department for 100,000 body bags as the toll...

[BENGALURU] Shares of Luckin Coffee sank 81 per cent on Thursday after the Chinese coffee chain said it had...

STARTUP generator and early-stage venture-capital firm Antler will invest up to US$500,000 in total in companies...