Annabeth Leowleowhma@sph.com.sg@AnnabethLeowBT
A fresh round of benefits may have cheered StarHub employees, but the higher staff costs were also partly to blame for the plunge in the telco's fourth-quarter earnings.
PHOTO: ST FILE

A FRESH round of benefits may have cheered StarHub employees, but the higher staff costs were also partly to blame for the plunge in the telco's fourth-quarter earnings.

Net profit fell to S$14.1 million for the three months to Dec 31, 2017 - a drop of 74 per cent on the same period the previous year - as a rise in expenses more than wiped out the modest 2.2 per cent uptick in total revenue, which stood at S$649 million.

Besides a one-off provision for staff benefits - which StarHub said was "to rationalise and retain talent in recognition of the business challenges and operating conditions" - the telco also forked out a heftier sum for operating leases.

This was due to contractual costs related to the cable network, amid plans to shift cable customers towards fibre broadband and Internet Protocol television services.

While quarterly service revenue was slightly higher on the previous year, the gain came from the growth of enterprise fixed services. Turnover from mobile and pay-TV services both fell, while broadband service revenue held steady, even as market competition put the squeeze on margins.

"We would effectively have 11 months of consolidation impact on D'Crypt," he said. "Without the D'Crypt impact, you would be looking at 2 per cent to 4 per cent decline in service revenue."

StarHub earlier picked up subsidiary Accel Systems & Technologies in mid-2017. As to whether more such acquisitions are in the pipeline, enterprise business group chief Chong Yoke Sin said that the Accel and D'Crypt deals already give StarHub "end-to-end service" in the enterprise-related cybersecurity sphere. 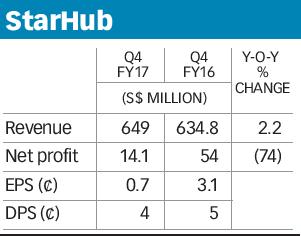 StarHub saw a 0.6 per cent dip in service revenue for the full year, and expects a year-on-year decline of between one per cent and 3 per cent for 2018, based on the current outlook.

StarHub has proposed a final dividend of S$0.04 a share, down from S$0.05 a share the year before.