STI one of Asia's top performers so far this year

But after the gains in January, Singapore stocks retreat on Jan 31 following Dow slide this week
Nisha Ramchandaninishar@sph.com.sg@Nisha_BT
Singapore stocks chalked up handsome gains through January, but pulled back on the last day of the month as the Trump trade turned into a Trump rout.
ST PHOTO

SINGAPORE stocks chalked up handsome gains through January, but pulled back on the last day of the month as the Trump trade turned into a Trump rout.

But still, the total value of the market managed to gain about 4 per cent month on month to S$915 billion.

This is the third straight month-on-month gain and the highest one-month increase since October 2015, when the market capitalisation surged 6.3 per cent.

From a year ago, market cap was up 13.7 per cent, according to data compiled by The Business Times.

Meanwhile, the benchmark Straits Times Index (STI) has emerged as one of the best-performing in Asia so far this year, underpinned by both domestic and external factors. 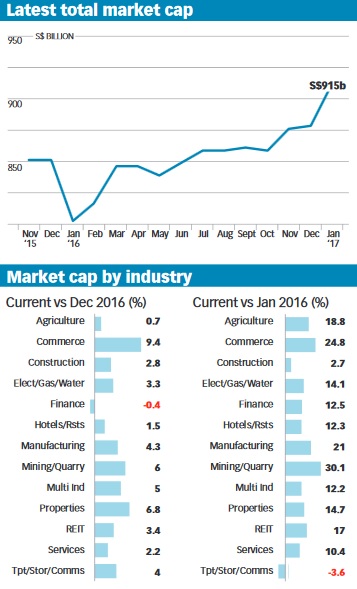 In the year to date, the STI has chalked up a gain of some 5.8 per cent, outpacing the Nikkei 225 and FTSE Malaysia KLCI; the Japanese index registered returns of -0.4 per cent, and the Malaysian one, 1.8 per cent at the close of trading on Tuesday. The Hang Seng Index was up about 6.2 per cent.

In the US, expectations of higher spend on infrastructure, coupled with lower taxes had led to a strong rise in the US indices, contributing to the positive sentiment on the STI in the year to date, analysts said.

IG Asia strategist Jingyi Pan said: "President (Donald) Trump has given global markets higher US growth to look forward to, and Asian markets anticipate some of these improvements to trickle down to regional markets as well."

UOB Kay Hian banking analyst Jonathan Koh said that expectations of rising interest rates in the US - especially in the second half of the year - have proved a positive booster for the local banks. "The bank (stocks) went up, dragging the index higher," he said.

At home, a stronger-than-expected gross domestic product (GDP) estimate for Q4 2016 has also helped to dissipate some of the gloom.

But it remains to be seen whether the upbeat sentiment will be sustained. Ms Yang said: "This bullish sentiment will be tested in February, in which two-thirds of the blue chip companies' earnings will be announced. Some profit taking could be seen in the local market following this rally."

Mr Koh agreed that investors might take some profit on outperformers, and added that some of these profits could be channelled towards the laggards.

Meanwhile, BT's compilation of January's market cap for Singapore stocks showed that gainers outnumbered losers 391 to 213, and that the stocks of the STI benchmark gained 6 per cent month on month to S$490.6 billion.

Property companies also chalked up increases, with their market cap rising 6.8 per cent to S$113.1 billion.

Meanwhile, the market cap of finance companies shrank by 0.4 per cent to S$215.7 billion during the month.

Looking ahead, analysts flagged this week's US Federal Open Market Committee meeting as an event for investors to keep an eye on, although chances of a rate hike are just at 14 per cent, said Bloomberg data.

Also on the radar are uncertainties surrounding US President Trump's policies towards immigration and free trade.

In particular, the Fed's tone towards the economic outlook, the new presidency and future rate hikes will be of key concern to investors, Ms Yang suggested.

Singapore's first manufacturing reading for this year, the January purchasing managers' index (PMI), is due out on Thursday.

Commenting on the outlook for the coming months, Ms Pan said: "President Trump's first week showed us that volatility could become more commonplace in the near term. Besides influences from the US, Q4 earnings reports would be co-drivers for February's performance."

UOB Kay Hian's Mr Koh said this year can be expected to continue to pose challenges. "Investors need to be aware (and) be careful, in case they get caught by negative surprises."

INTELLLEX, a legal knowledge-management platform provider, has raised US$2.1 million in Series A funding led by...

[WASHINGTON] New orders for US-made goods plunged in April and business spending plans on equipment were much weaker...