Current recovery may be too little, too late for smaller S'pore O&M firms; key to oil price trend lies with Opec, shale, demand and global inventories
Andrea Sohsandrea@sph.com.sg@AndreaSohBT
Three years after plunging from highs of over-US$100-a-barrel, oil prices are expected to languish around US$50 for at least a year more.
PHOTO: BLOOMBERG

THREE years after plunging from highs of over-US$100-a-barrel, oil prices are expected to languish around US$50 for at least a year more.

That's a good 25 per cent above the US$40 which oil producers have based their capital spending on this year. But sadly, the improvement might be too little, too late for many of the offshore and marine (O&M) players listed on the Singapore Exchange (SGX), analysts said.

"Only the bigger players with strong backing, like Keppel Corp and Sembcorp Marine, will be able to survive this downturn," said KGI analyst Joel Ng. For many of the small and medium-sized companies such as Nam Cheong, ASL Marine and Marco Polo Marine, severe cash flow problems and a loss of support from lenders mean they will face huge writedowns and an uncertain future in the next 12 months, he added.

"There are simply too many vessels and oil rigs in the market and this will take two to three years to balance out," said Mr Ng.

Agreeing, UOB Kay Hian analyst Foo Zhiwei said: "For the smaller Singapore O&M companies running out of cash and still saddled with debt," there is no escaping.

"Either the banks agree to give them a principal repayment holiday with no interest, or take a haircut or they fold."

Mr Foo does not believe the industry will turn around in the next one to two years. "You can try to bet on Keppel or Sembcorp Marine, but it's really a long-term bet on factors that are not apparent right now." 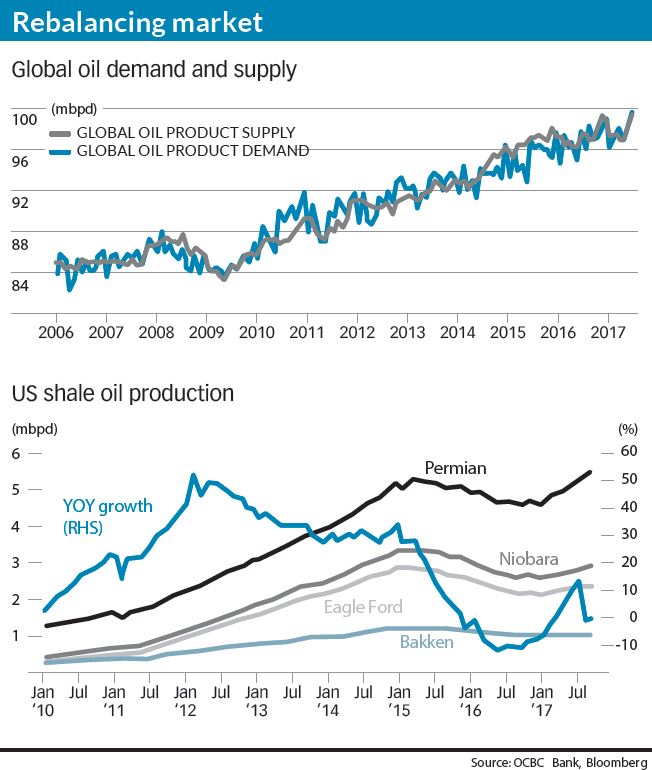 Looking ahead, analysts are keeping an eye on a few factors: Production from the Organization of Petroleum Exporting Countries (Opec), shale activity, demand growth and inventory levels.

Conventional oil producers, especially those from Opec, have been locked in a battle for market share against US shale producers in the past three years. The three-year headlock has sent oil to as low as below US$40 a barrel, and unleashed much pain on the upstream oil and gas sector and Singapore's O&M players - yet no winner has emerged.

In the shale market, US producers are expected to boost output with any rise in oil prices, a move that would narrow the range for oil prices. In the short to medium term, the break-even oil price for US shale producers will have a large influence on the oil price, said Espen Erlingsen, a partner at oil consultancy Rystad Energy.

Analysts - who are forecasting oil to stay rangebound between US$45 and US$60 over the next few years - say US shale production costs differ vastly from producer to producer, and region to region. But all agree that over the past three years, costs have dropped and productivity has risen.

Mr Erlingsen estimates that the average wellhead breakeven price for shale has plummeted by almost half from US$64 a barrel in 2014, to US$36 a barrel last year.

This drop is driven by several factors such as selectively drilling from low-cost wells, better well performances, and low overall costs. There have also been "considerable improvements" in the amount of oil produced from each shale well, he noted.

Shale producers are also benefiting from a 30 per cent drop in the prices charged by oilfield service companies, Mr Erlingsen said.

Notwithstanding the improved economics for shale, industry players are starting to say that US shale players need inland West Texas Intermediate (WTI) crude prices to be at least US$50 a barrel to break even.

Harold Hamm, chief executive of Continental Resources, a large shale producer in North Dakota and Oklahoma, has said prices need to be above US$50 to be sustainable, and prices below US$40 would cause drillers to idle rigs again.

While he concurs with these assessments, Mr Erlingsen said: "Historically it has not been the breakeven price, but rather the cash flows that has limited the shale activity."

Indeed, the US oil industry has continued to add supply despite a lack of profitability due to generous financing from banks, repeated equity issuance and high levels of debt.

Hence total US oil output has continued to grow, rising to 9.5 million barrels a day in late August, the highest level of oil output in the US in two years.

On the other hand, development costs for conventional production has fallen by about 20-25 per cent over the last three years, Mr Erlingsen estimates.

Richard Gorry, managing director at JBC Energy Asia, said that overall costs for Opec producers have not changed significantly as they had the lowest cost of production anyway.

But non-Opec private companies have been working hard to cut costs. Mr Gorry said: "Many projects that were approved with breakeven costs in the range of US$75 to US$100 per barrel have been repriced at US$40 to US$50 per barrel."

Jeff Brown, president of energy consultancy Facts Global Energy, said the long run marginal cost of production will depend on the demand growth.

OCBC commodities economist Barnabas Gan believes that for Opec, however, rather than looking at their cost of production, one should look at their breakeven prices which include the cost of production and the revenue required to cover fiscal spending.

"Breakeven prices have been falling for most Opec countries given fiscal cut-backs in the member countries," he noted. "Still, estimated breakeven cost for 2017 according to the IMF suggests that all Opec members need higher oil prices to finance their respective fiscal spendings."

Opec and other major oil producers late last year agreed to cut output by about 1.8 million barrels from the peak October 2016 levels, in order to rebalance the market. They have extended this agreement through to March next year.

Mr Brown is expecting inventories to trend sideways at still-high levels through to 2018, after declining in the third quarter of this year.

In the next few months, however, recent weather disruptions in the US and their impact on US oil production and refinery capacity will be in focus.

ANZ analyst Daniel Hynes noted in a Sept 7 note that while a shutdown of many US refineries could result in crude oil inventories building up, onshore and offshore oil production had also been disrupted.

"Hurricane Harvey and the subsequent flooding in Texas has the potential to hurt the rebalancing of the global oil market," he said.

[PARIS] In a world first, a woman rendered infertile by cancer treatment gave birth after one of her immature eggs...

[PARIS] Egypt, Algeria and South Africa are at high risk of suffering from the deadly coronavirus, a study released...

[PARIS] Emissions from fossil fuel production of the potent greenhouse gas methane is 25 to 40 per cent higher than...

[NANTERRE, France] French investigators said Wednesday they were stepping up their investigation into two parties...