One-year total return of 1.49% sharply down from 12.2% a year ago; it expects portfolio to outperform global equity portfolio over next 20 years
Jamie Lee leejamie@sph.com.sg@JamieLeeBT
Temasek Holdings on Tuesday reported a one-year total shareholder return (TSR) of 1.49 per cent for the 12 months ended March 31, 2019.
ST PHOTO: TIMOTHY DAVID

TEMASEK Holdings on Tuesday reported a one-year total shareholder return (TSR) of 1.49 per cent for the 12 months ended March 31, 2019, and is readying for lower returns expectations for the longer term amid weak global growth, as well as heightened competition for investments.

This was sharply lower than the 12.2 per cent TSR in the year-ago period, with TSR a compounded and annualised measure that includes dividends paid to its shareholder but that excludes its shareholder's capital injections.

With most of its assets out of Singapore and Asia, the TSR reflects in part the market selldown that was also seen across regional indices over that period. Compounded over 45 years since its inception in 1974, Temasek's annualised returns stood at 15 per cent.

Temasek also measures itself in part against a hurdle rate, defined as its risk-adjusted cost of capital aggregated across its investments.

Here, its one-year return did not beat its risk-adjusted cost of capital of 7 per cent, Temasek disclosed at its annual review. Its 20-year TSR of 7 per cent is also lower than its 20-year hurdle rate of 9 per cent.

To be sure, its TSR of 15 per cent since its inception in 1974 exceeded the hurdle rate then of 9 per cent.

The Singapore government had said in 2013 that it looks at the long-term TSR posted by Temasek in context of Temasek's hurdle rate.

Asked if the latest set of numbers may be viewed as an underperformance by its shareholder, the state investor pointed to its systematic shift in the last decade to build resilience in the portfolio. This includes capturing growth out of Asia that speaks to long-term secular trends, and the ploughing of more investments into private markets that should yield better returns in time. 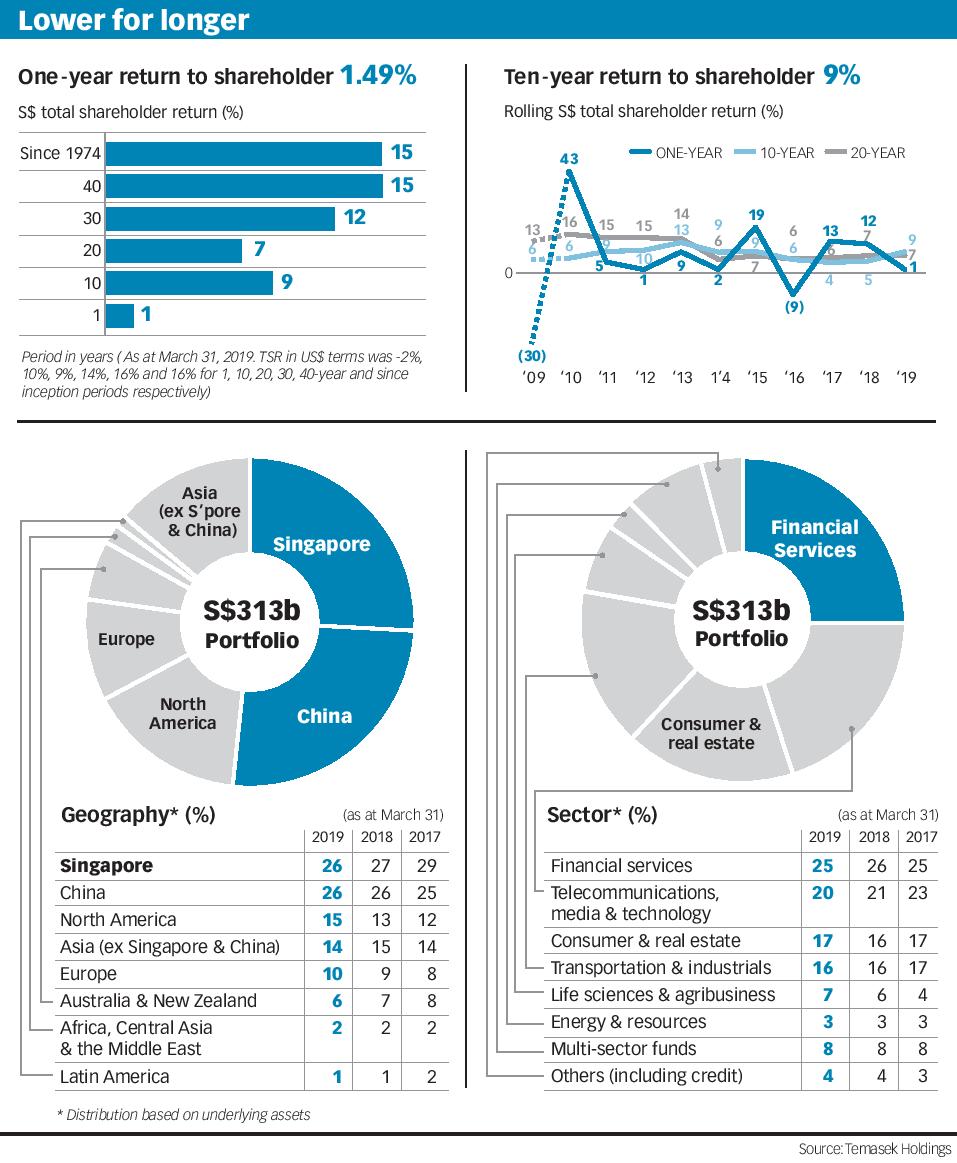 Speaking to the media, Dilhan Pillay Sandrasegara, CEO of Temasek International, said that in the next 20 years, Temasek's portfolio is expected to outperform a global equity portfolio referenced in its model, albeit with a higher volatility.

"What does our shareholder look to us for? It's to make sure that we have a portfolio that's resilient, that's able to build that sustainable long-term returns over a very long period of time. That's what they are relying upon under the Net Investment Returns framework," he said. Under the Net Investment Returns framework, the Singapore government can spend up to 50 per cent of the long-term expected real returns - including capital gain - on the relevant assets, and these assets refer to net assets invested by GIC, the Monetary Authority of Singapore and Temasek, minus the liabilities of the government.

Png Chin Yee, senior managing director, portfolio strategy and risk group at Temasek, said: "We do expect that if the environment is going to be a negative returns environment, for example, then it is possible that we also invest in opportunities which may not meet our cost of equity, but which offers positive returns. Positive is better than zero."

Mr Sandrasegara also flagged that Temasek is seeing heightened competition in its areas of focus, with the investor seeking growth from businesses benefiting from consumers' longer lifespans, and rising affluence, as well as technology enablers.

"There is a lot more capital now looking for yield in the sectors that we like, and so valuations remain elevated. As we look for the returns that commiserate with our cost of capital, we have to be mindful of the fact that it's going to an expensive world out there," he told the media.

"I think we are quite prepared for that enhanced competition, and we just have to make sure that we are very focused on returns."

Temasek has increased its exposure to unlisted assets, with these investments in the private markets now making up 42 per cent of its portfolio, up from 33 per cent in 2015. Its unlisted assets include Mapletree Investments, Singapore Power, PSA, and other funds.

Temasek expects that the allocation towards alternatives, private equity, and venture capital, is expected to increase in the next few years, with the unlisted assets proportion to continue to grow as well.

As a sign of this, geographically, the US again accounted for the largest share of Temasek's new investments during the year, followed by Europe and China. Temasek's exposure to the US is mainly through the private markets. While there has been a significant upswing in the public markets in the US, Temasek does not have significant exposure there. Some of its new investments include US investments in UST Global, a digital solutions provider, and DoorDash, an online food delivery marketplace.

And with Temasek's exposure to financial services remaining the largest at 25 per cent, it also said it would continue to focus on non-bank fintech and payments platforms such as Ant Financial in China.

Temasek International's chief operating officer Chia Song Hwee said private investments, "based on the past performance", will give Temasek better returns in the future amid a reshaping of the portfolio over the next decade or so.

Two-thirds of Temasek's exposure is in Asia, as it seeks to capture long-term growth from the region.

The Singapore investment firm's net portfolio value grew to S$313 billion for the year ended March 31, 2019, up from S$308 billion a year ago on a Sing-dollar conversion basis. Temasek received dividend income of S$9 billion from its portfolio.

During the year under review, Temasek shifted into divestment mode, divesting S$28 billion in assets, and investing about S$24 billion in the same period. Temasek had guided a year ago that given the market outlook, it may recalibrate and slow its investment pace over the next nine to 18 months.

Key divestments by Temasek included Gilead Sciences, Cargill Tropical Palm and Klabin. It continues to maintain significant holdings in Alibaba, CenturyLink and IHS Markit, even as it shed some stakes to rebalance its portfolio.

The state investor also flagged the rising risks that will crimp global growth, including trade tensions between China and the US, as well as the deepening shade of populism. Against this backdrop, the dovish rates environment further means that returns are expected to be "much more challenged", said Ms Png.

Asked about the impact from the trade war on Temasek's portfolio, Mr Chia said the investor sees "minimum" near-term immediate impact. "But we are more concerned about the headwinds that will lead to slower growth for the entire world."

Temasek's investments are more geared towards domestic consumption, and that play to structural transformation in economies, with China's shift to a consumption-led economy mirrored in Temasek's portfolio mix today, said Ms Png. Temasek held a 1 per cent stake in Alibaba, and a 2 per cent stake in Ping An Insurance, as at end-March this year.

As at March 31, 2019, Temasek had the same geographical exposure to Singapore and China, at 26 per cent each. Its exposure to the North American market stood at 15 per cent, and that in Europe at 10 per cent.

Singapore is currently in a "repositioning" phase, said Mr Sandrasegara, with Temasek fostering tripartite discussions with its portfolio companies here to ensure that staff are being trained to tackle technological disruption, and that these businesses here are adapting to new realities.

In observing its portfolio companies investing in digital strategies, Temasek has seen about half of those investments today going towards boosting productivity, and the other half meant to seek out new revenue sources, said Mr Chia.

[LONDON] Sterling rallied on Tuesday with a broad rebound in risk markets encouraging some selling of the dollar,...

[FRANKFURT] Lufthansa on Tuesday said it will ground its Germanwings low-cost airline as part of a broader overhaul...

[SAN FRANCISCO] WhatsApp on Tuesday placed new limits on message forwarding as part of an effort to curb the spread...

[SINGAPORE] Singapore reported 106 cases of Covid-19 on Tuesday (April 7) said the Ministry of Health (MOH) in its...

US economy will eventually reopen but with big changes: Kudlow

[WASHINGTON] The Trump administration is aiming to reopen the US economy when the nation's top health experts give...