Trekking the ups and downs

Tan, Singh and Poo are also accused of committing disclosure offences under the Securities and Futures Act.

Tan - who shot to prominence as inventor of the revolutionary thumbdrive - faces a total of 15 charges involving alleged offences as far back as 2006. Of these, seven relate to falsification, including entries in Trek's financial statements from 2011 to 2015.

These included two charges of him engaging in a conspiracy with Singh between 2006 and 2011 and in 2015 to create false entries in Trek's financial statements for 2011 to 2015.

He is also accused of conspiring with Singh, also 63, Poo, 42, and Foo, 52, to deceive external auditors Ernst & Young (E&Y) into believing that the FY2015 financial statements had been properly drawn up in a bid to obtain an unqualified opinion, thereby attracting a single cheating charge.

Further, Tan had allegedly instigated a staff member to forge documents for the purpose of deceiving E&Y into believing that Trek's FY2014 financial statements were in regulatory compliance to obtain a clean audit.

He was also slapped with six counts of disclosure offences for "recklessly" failing to make immediate announcements on a total of 47 interested person transactions from 2010 to 2013 relating to sales between the group and related companies S-Com Solutions (Hong Kong) and T-Data Systems.

Tan stepped down in May 2018 as chief executive and director of the technology solutions provider. His son, Wayne Tan Joon Yong, is currently group president and executive director.

Singh faces a total of 16 charges similar to Tan's, while Foo and Poo have been charged with three and eight offences respectively.

The prescribed maximum punishments for each count of cheating and forgery for the purpose of cheating are the heaviest - a 10-year imprisonment term and fine.

Each accused was granted bail of S$300,000 or S$400,000. Their cases will be mentioned on Nov 6 as Foo and Poo were given time to engage lawyers and for Tan and Singh to make representations to prosecutors.

Tan is represented by Andy Lem of Eversheds Harry Elias. 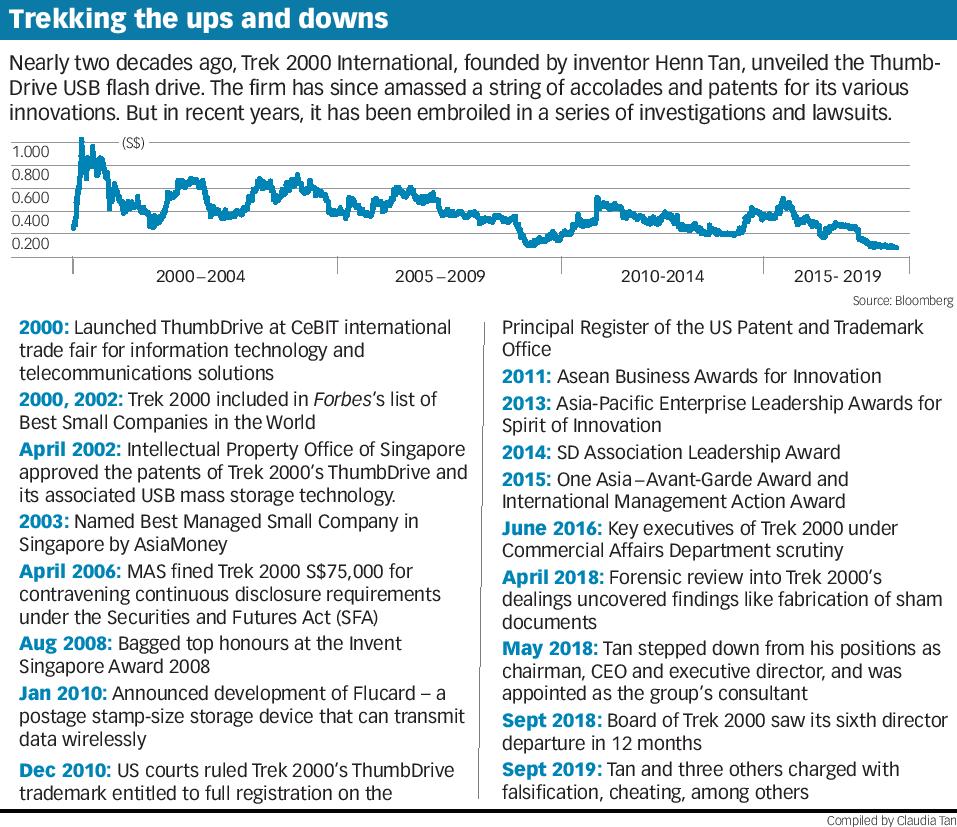 Tan's arraignment, which comes over a year after a forensic review flagged potential legal breaches, is a further blow to Trek's continuing struggles.

Tan had said in the past that Trek 2000 made its "single biggest mistake" when it was too quick to share its new thumbdrive technology while the patent for it was still pending.

It had invented the universal serial bus (USB) data storage device at the turn of the millennium, consigning floppy disks to history, and putting Trek on the global tech stage.

But clones quickly swamped the market. The company went after them hammer-and-tongs in court. It was a slog that took years and cost millions, with victory achieved on a painstaking, piecemeal basis.

The counter was 0.4 Singapore cents or 4.9 per cent lower at 7.7 cents on Wednesday. Trek did not issue any announcement on the arraignments nor made a request for a trading halt even though some of the alleged offences relate to the veracity of its financial statements.

The company had not responded to The Business Times' queries by press time.

Meanwhile, the Singapore Exchange Regulation (SGX RegCo) issued queries to Trek 2000 on Wednesday night, referring to articles by BTand The Straits Times regarding the charges by the Commercial Affairs Department (CAD) against Tan and the three other former officers.

It asked whether all charges served on the four parties relate to matters highlighted by RSM Corporate Advisory in their reports released by Trek on July 18, 2017 and April 23, 2018. Trek had appointed RSM's forensic accountants in June 2016 to conduct an independent review of certain interested party transactions as well as suspicious transactions being investigated by the CAD.

In addition, SGX RegCo wanted to know if the financial impact of the matters that are subject to CAD charges had been publicly disclosed and also asked the board of Trek to provide an update to shareholders on how it has addressed internal control lapses in the group.

SGX RegCo had issued a notice of compliance on Apr 26, 2018 requiring the company to undertake an independent review of its internal controls and corporate governance practices.

[SINGAPORE] A China national has tested positive for the Wuhan virus in Singapore, with another likely to have the...

KOH Brothers Eco Engineering is exploring the possibility of spinning off its majority-owned indirect subsidiary...

[FRANKFURT] The European Central Bank left its policy unchanged on Thursday and launched a "strategic review" of its...

[WASHINGTON] Democrats on Wednesday accused Donald Trump at his historic Senate impeachment trial of seeking to...

[BEIJING] A virus outbreak in China has prompted seven Chinese films that were set to premiere during the country's...