For hospitality players with British holdings, tourism could see a boost; for others, stronger domestic factors at play
Lynette Khoo
Shares of City Developments Limited (CDL), which had planned three development projects in the UK for launch after the UK elections and has major hotel exposure through London-listed Millennium & Copthorne Hotels and Singapore-listed CDLHT, also held up on Friday, rising 19 cents to S$10.95.
PHOTO: ST FILE

THE fallout of Singapore stocks exposed to the UK market was muted on Friday, even as the pound took a beating from an unexpected elections outcome of a hung Parliament.

Singapore's stock market shrugged off most of its morning weakness, with the benchmark Straits Times Index closing at 3,254.19, up 17.14 points or 0.53 per cent from Thursday. Most UK-linked counters also held up.

This resilience flies in the face of analysts' expectations that the pound's weakness will likely persist as the upcoming Brexit negotiations become more complicated given the UK's weaker negotiating position.

"For companies who operate mainly in UK and listed in Singapore, their earnings will be affected when translating back to the Singapore dollar," said Margaret Yang, market analyst at CMC Markets Singapore. "But given that the pound fell only around 2 per cent against the US dollar on Friday, the impact will be much less compared to the EU referendum last year."

It is also early days for companies to review their strategy for the UK market based on this event alone, especially now that the loss of the Conservative majority in Parliament would amount to the party losing its mandate to take Britain out of the European Union's single market. Ms Yang noted that this throws into doubt whether Brexit will even happen at all. 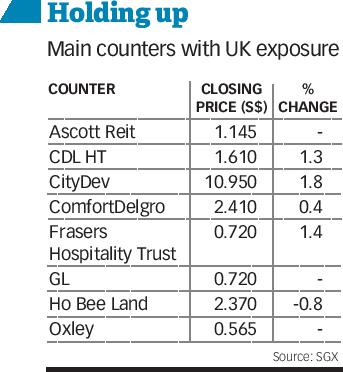 DBS senior vice-president for group equity research Derek Tan posited that the current weakness in the pound may be a short-term blip. For Singapore stocks, there are stronger domestic factors at play, he said, citing a recovery in the residential market with more sales transactions coming through and a revival in the collective sales market.

For hospitality players with UK exposure, the weaker pound may have a "counter-cyclical effect" as it makes the UK more attractive as a tourist destination, Mr Tan added. Such an impact, he conceded, may take time to trickle down.

UK properties made up about 7.4 per cent of Ascott Reit's gross profit for the quarter ended March 31, 6 per cent of CDLHT's net property income (NPI) for fiscal 2016, and less than 15 per cent of FHT's NPI currently. Eu Chin Fen, CEO of FHT's manager, said that FHT has fully hedged its foreign-sourced income to mitigate foreign exchange volatility.

Shares of City Developments Limited (CDL), which had planned three development projects in the UK for launch after the UK elections and has major hotel exposure through London-listed Millennium & Copthorne Hotels and Singapore-listed CDLHT, also held up on Friday, rising 19 cents to S$10.95. Their parent firm, Hong Leong Group, said in a response on Friday that it remains confident of the long-term fundamentals of the UK economy.

"CDL's strategy of targeting predominantly UK nationals for its residential developments in London and its management of foreign exchange exposure through a policy of matching receipts and payments, and asset purchases and borrowings in each individual company to create a natural hedge, insulates the group from the potential impact of the UK's impending exit from the EU," a Hong Leong Group spokesman said.

Ho Bee Land, whose assets in the UK are mainly offices and had incurred losses in its UK operations last year, shed two cents on its share price to S$2.37 on Friday. Executive director Desmond Woon said all of the group's investments are long-term in nature and it remains open to acquiring UK properties if there are good opportunities.

Another Singapore company with substantial exposure to the UK is Oxley Holdings, whose Royal Wharf project in London has achieved more than 90 per cent of sales. Oxley Holdings shares were unchanged at S$0.565 on Friday.

Oxley CEO Ching Chiat Kwong told The Business Times that he does not expect the current pound weakness to affect group earnings. Its property investments and developments are spread across 10 different countries, including the UK. "While we do not see the outcome of the UK poll altering the group's strategy in London, we will continue to monitor the current UK political situation," he said.

For transport services company ComfortDelgro, which derives more than 10 per cent of operating profit from the UK and Ireland, its shares closed one cent higher at S$2.41 on Friday. It had said in its first quarter results ended March 31 that revenue from the UK bus business is expected to shrink due to translation effect from the weaker pound to the Sing dollar.

A UOB report on Friday projected a plummet of GBP/USD towards the 1.21 region under the "hung Parliament" outcome; Citi also said in a note that it believes risks on sterling are "asymmetrically skewed to the downside".

[PARIS] Tennis world number one Novak Djokovic stormed to his 70th win at Roland Garros on Thursday with a 6-1, 6-2...

[FRANKFURT] Eurozone banks need to prepare for a rapid deterioration in their balance sheets and take decisive steps...

[WASHINGTON] US manufacturing activity unexpectedly slowed in September as new orders retreated from a more than 16-...

[BRUSSELS] Alphabet's Google plans to pay US$1 billion to publishers globally for their news over the next three...

[BENGALURU] Founders of dozens of Indian startups gathered over a Zoom call earlier this week to discuss setting up...