But Mr Wee added in a media briefing on Friday morning that while housing loan activity may drop in response to the cooling measures, this is not expected to hit the bank's home loans growth for now, given the progressive drawdown of loans booked previously.

The bank has kept its 2018 home loans growth forecast of 6-7 per cent.

This comes as UOB reported a 28 per cent rise in net profit for the second quarter that was lifted by stronger overall operating income, and announced plans to ramp up its digital strategy with a digital bank due for launch in its key South-east Asian markets.

Net profit for the three months ended June 30, 2018 stood at S$1.08 billion, up from S$845 million. This beat estimates provided by S&P Global Market Intelligence of S$967 million. The net profit translated to annualised earnings per share of S$2.51, up from S$2 a year ago.

Net interest income grew 14 per cent to S$1.54 billion, supported by loan growth of 10 per cent and an improvement in net interest margin (NIM) by eight basis points (bps) to 1.83 per cent.

Total expenses for the quarter gained 10 per cent from a year ago to S$1.02 billion, primarily from staff expenses and planned IT-related investments. The cost-to-income ratio for the quarter stood at 43.6 per cent.

The bank said separately on Friday that it would launch a digital bank in its key Asean markets, with an aim to grow a base of three to five million customers in the next five years. The digital bank will be operated at a "steady-state" cost-to-income ratio of 35 per cent, it said.

BT understands it is expected to look at the five markets of Singapore, Indonesia, Malaysia, Thailand and Vietnam, with the bank sharpening its focus on mobile-savvy customers, by "(wrapping) technology in the human touch".

It said it would use a "unique data-centric business model", that taps the entire customer life cycle comprehensively. UOB will rely on its in-house digital technology development, as well as its collaboration with fintech partners such as its recent joint venture with credit assessment firm Avatec.ai, and its investment and partnership with data analytics firm Personetics.

On its quarterly results, UOB said allowances halved to S$90 million in the second quarter from a year ago, with the year-ago quarter including higher allowances were mainly driven by specific allowance set aside for non-performing loans (NPL) from the oil-and-gas and shipping sectors. 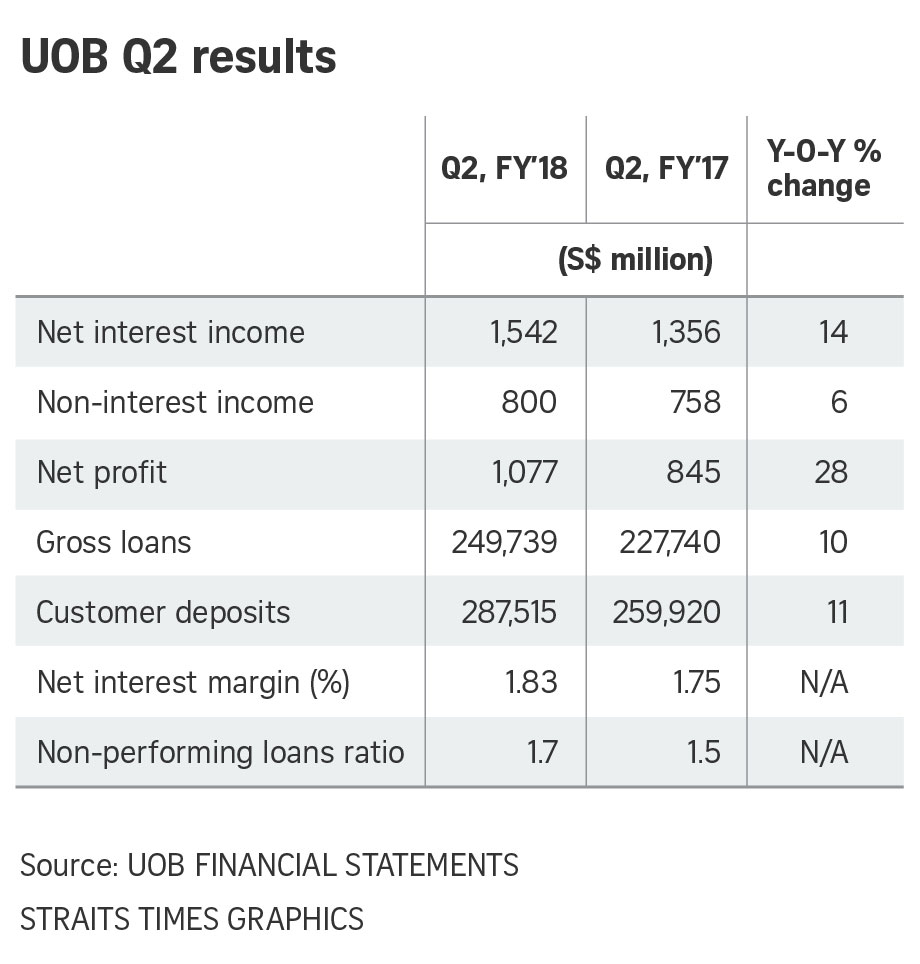 UOB's Mr Wee has flagged near-term uncertainties for the global economy and Singapore.

“Looking ahead, there are uncertainties in the global economy, with a trade war that could escalate and signs of a slowing Chinese economy.  Closer to home, the property market may see a slowdown from recent cooling measures. Our diversified footprint and customer franchise will help mitigate the impact of some of these macro headwinds.  We stay vigilant and believe our strong balance sheet can cushion the volatility," he told reporters on Friday.

"Despite near-term uncertainties, we believe in the long-term potential of Asia, underpinned by intra-regional business flows and rising affluence.”

DBS on Thursday reported an 18 per cent gain in net profit for the second quarter that missed estimates on the street, as stronger net interest income was offset in part by a fall in non-interest income on lower trading income. The bank has dialled back its property loans growth forecast by S$1 billion, given that last month's cooling measures are expected to hit sentiment.

DBS's treasury markets income for the second quarter also dropped 59 per cent from a year ago to S$107 million, due to a "perfect storm" of widened Asian credit spreads on the back of trade tensions, a flattened yield curve impacting its bond holdings, as well as the equity market selloff.

Speaking to reporters on Thursday, DBS chief Piyush Gupta noted that with US-China trade tensions, "the biggest problem... is the spillover impact".

"That links back to the treasury markets business. The spillover impact really winds up with the confidence issue; it's a market psychology issue more than what really happens to the underlying trade flows," he said.

[NEW YORK] Wall Street opened lower on Tuesday following a mixed bag of quarterly earnings from US lenders and...

[LONDON] Global oil demand will soar by a record 7 million barrels per day in 2021 as the global economy recovers...