Whether Trump or Biden wins, infrastructure will be a safe bet

Conversely, if the incumbent US President Donald Trump gets a second term, that will bode well for pretty much the flip side of the picture: oil and gas counters, US tech firms, US banks, managed care companies, as well as infrastructure - the latter being the only overlap between both candidates, as both have a mandate to support infrastructure spending. The slight difference is that while Democratic nominee Joe Biden has committed to making the US carbon neutral by 2050 with his US$2 trillion infrastructure programme, Mr Trump's focus on infrastructure is instead on the building of a 5G national wireless broadband network, including in rural areas.

Bank of Singapore head of investment strategy Eli Lee said: "Regardless of who wins, there is an increased chance of infrastructure spending - either in the form of a package being passed, or an increased focus in this area."

For this reason, the private bank has been advising clients to rebalance into the industrials sector, into stocks in the machinery, transport and logistics space, which are expected to benefit from increased infrastructure building, while steering clear of oil and gas, a sector that Mr Biden is expected to clamp down on if he wins.

With the elections seven days away, prediction markets are indicating a strong 51 per cent to 43 per cent advantage for Mr Biden, according to RealClearPolitics data as at Oct 27.

Besides their policy stance, eyes are also on the size of a fiscal stimulus and emergency aid package that is expected to be rolled out. A bigger package is expected under a Biden win, but the worry lies in a gridlock situation where Congress is split between the two parties.

This is because a portion of the Senate Republicans are fiscally conservative and may want to shrink the stimulus programme before it can be passed, said Prashant Bhayani, chief investment officer, Asia, at BNP Paribas Wealth Management. 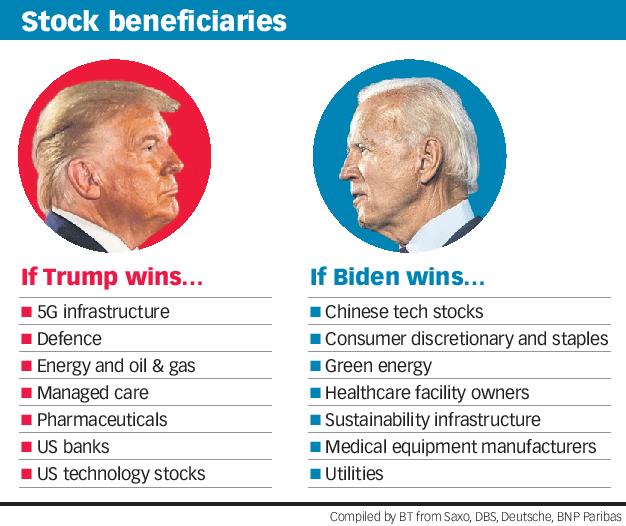 A stimulus package is good news for stock markets. "Stronger post-election fiscal spending will be reflationary for US equities as a whole and on a sectoral basis, the geared beneficiaries will include industrials and energy," DBS chief investment officer Hou Wey Fook said.

Paul O'Connor, head of multi-asset investments at Janus Henderson Investors, also thinks that a "blue wave" outcome, or Democratic sweep, could result in a rotation away from liquidity-sensitive assets to more cyclical assets, and from growth stocks towards value themes.

Laggards such as materials, industrials and bank stocks could find support in the prospect of a big fiscal stimulus, while enthusiasm for technology stocks could be tempered by higher taxes and more stringent antitrust measures. US pharmaceutical and energy companies, which, like tech firms, have enjoyed the dubious luxury of vague or lax policies under the Trump administration, may suffer if Mr Biden wins, on the same concerns about regulatory intervention and higher taxation.

Mr Biden's policies, which favour the raising of minimum wages to US$15 per hour, would also help to support consumption, as the economic multiplier on the spending could be "modestly reflationary", Mr Bhayani said. This would thus favour consumer discretionary stocks.

A Deutsche report noted that Mr Biden's plans to bolster the Affordable Care Act which includes a public health insurance option would likely lead to a broad-based increase in healthcare spending. As a result, healthcare equipment manufacturers and distributors of medical devices could benefit from an increase in the insured population. An expansion in Medicaid will also likely benefit healthcare providers and hospitals.

In contrast, under a Trump victory, managed care - health insurance that contracts with specific healthcare providers to reduce the costs of services to patient - will likely benefit instead, because in the absence of a public option, any future healthcare plan would be centred on utilising the existing players in the industry or other private options.

The greatest downside for equity markets in the case of a Biden win is the impact of higher statutory tax rates on the earnings of American companies, from 21 per cent back up to 28 per cent. Carmen Lee, head of OCBC Investment Research, said: "With a Biden win, corporate and personal tax rates are likely to go up and will in general be negative for corporate earnings ... this could mean about a 12 to 13 per cent drop in earnings for the S&P 500 companies."

Meanwhile, any stimulus programme coming out of the US, coupled with accommodative monetary policies, will inevitably result in liquidity diverting to Asian local markets in search of better yields.

DBS believes that a Biden victory will be positive for clean energy counters such as Thai-listed Global Power Synergy and Hong Kong and Shenzhen-listed Xinjiang Goldwind, while energy stocks such as offshore crude oil producer CNOOC, PetroChina, Thailand's PTT and Keppel Corp will benefit from a Trump win.

While Mr Biden's trade stance with China may not differ much from Mr Trump's, DBS expects Asian equity investors to prefer Mr Biden's multilateral approach compared to Mr Trump's unilateral and unpredictable style, and adds that Mr Biden's willingness to reconsider America's tariffs with China will lend a further boost.

The worst-case scenario is a contested election outcome. This has a higher probability of happening than what the market is currently pricing, said Peter Garnry, global head of equity strategy at Saxo Markets. If it occurs, it will introduce renewed market volatility between the election date on Nov 3 and the inauguration day on Jan 20. In this scenario, analysts expect the dollar to weaken, equities to sell off, and investors to seek refuge in gold.

[BENGALURU] Michigan's secretary of state said on Wednesday that a lawsuit by US President Donald Trump seeking to...

OCBC does not expect a fresh wave of loan moratorium requests amid the extension of targeted debt holidays in...

[BENGALURU] US stock futures took a breather in after-hours trade on Wednesday, as ballots were tallied in several...

[WASHINGTON] More than 99,000 novel coronavirus cases were recorded in the United States in the past 24 hours, a new...

KARL Liew Kai Lung was charged with two offences on Thursday for giving allegedly false statements in the criminal...

Phase Three of Singapore's reopening could last for a year or more: Gan

Singapore banks dial back worst fears; Q3 profit mostly up over the quarter

Asian markets resilient as hopes for a blue wave fade