ZENROCK Commodities Trading has changed its tune and decided to not resist HSBC Holdings' bid to place the troubled firm under judicial management (JM).

The Business Times understands that the oil trader - one of several players in Singapore's sizeable commodities trading space that have been bruised by an oil crisis spawned by Covid-19 - had informed the Singapore High Court of its intention to not contest the JM path about a week ago. The JM hearing is fixed for July 13.

It is not clear what had led to the change of heart.

In early May, when ZenRock, under mounting financial strain after oil prices plumbed record lows, sought a six-month debt moratorium from the court, its controlling owner Xie Chun had said in a court document that its hand had been "forced" by HSBC's actions. He also warned that the JM application by its biggest creditor will "likely have damaging consequences" to the company and its ability to trade once the news hits the market.

BT reported that at a lengthy virtual hearing around the same time, HSBC's application was "heavily contested", although in the end, HSBC, which is owed some US$50 million got its way.

The court granted the application to place ZenRock under the court-supervised proceedings and appointed three interim judicial managers from KPMG. 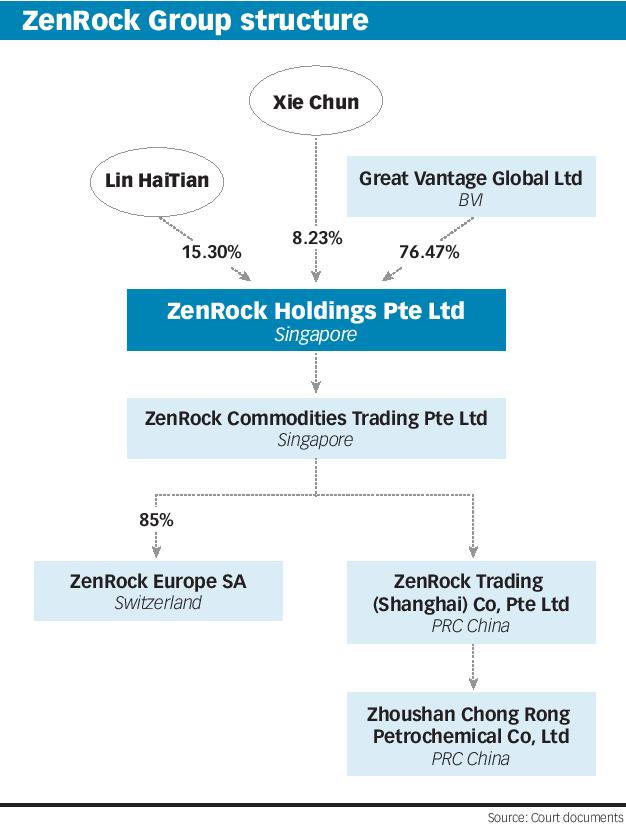 Singapore-based ZenRock, which last year raked in US$8 billion revenue and a gross profit of US$35 million, owes six banks about US$147 million. The other lenders are Natixis Bank, Crédit Agricole Corporate & Investment Bank, ING Bank, Bank of China and Banque de Commerce et de Placements SA. The trader, whose business is international with China accounting for a big part, also has uncommitted and unutilised trade facilities from other banks.

HSBC, in court documents, said that it had pushed for ZenRock to be placed under JM as it was "clearly insolvent" and had very little cash to repay debts.

Moreover, the bank was seeking to oust the company's management from any potential debt workout process as it has lost trust and confidence in them after unearthing alleged "highly dishonest" and "extremely suspicious" trade practices.

The UK-based bank accused the trader of "opaque conduct" in withholding vital information from lenders. More seriously, it alleged that ZenRock issued duplicate commercial invoices with different payment instructions to obtain double or multiple loans from banks on the same cargo.

Mr Xie Chun, ZenRock's president and founder who previously worked at China's state-controlled Unipec - the trading arm of China's largest refiner by capacity Sinopec - is one of two directors of the company. The other is Tony Lin HaiTian, an ex-Vitol executive. Both men are veteran traders.

It was reported last month that the Singapore police had raided the oil trader's office following HSBC's allegations. The bank had lodged a police report with the Commercial Affairs Department on April 28 on the company's conduct.

This is not the only controversy that has dogged Singapore's industry, which is the world's key oil market and top bunkering port.

The oil slump has led to an ever-bigger fallout - that of Hin Leong Trading (HLT) which is wobbling on a hefty debt pile of US$4 billion and in April was granted an interim judicial management (IJM) order by Singapore's High Court.

Singapore police have since launched a probe into the giant oil trader. Court documents allege that HLT hid about US$800 million in losses racked up from futures trading from its financial statements.

Amendment note: Due to an editing error, an earlier version of this article incorrectly stated that HSBC was owed S$150 million. The bank is in fact owed about US$50 million.

HOME buyers snapped up over 90 per cent of the 120 units launched for The Landmark on Saturday, the first day of...

[SINGAPORE] There were eight new coronavirus cases confirmed as of Sunday noon, taking Singapore's total to 58,213...

[BRUSSELS] HSBC Holdings is considering an exit from US retail banking, according to a report by the Financial Times...