Angela Tanangelat@sph.com.sg
Seventy per cent of Singaporeans are active social media users on the go, more than double the global average of 34 per cent, according to a report on social media and digital trends around the world.
ST PHOTO

SEVENTY per cent of Singaporeans are active social media users on the go, more than double the global average of 34 per cent, according to a report on social media and digital trends around the world.

The report, "Digital in 2017", is a joint annual effort by Hootsuite, a platform for managing social media, and We Are Social, a social media agency. It compiles data from studies of online behaviour conducted by organisations including GlobalWebIndex, GSMA Intelligence, Statista, and Akamai.

It helps that Singapore's average fixed internet connection speed is close to 3 times the global average, at 18.2 mbps compared to 6.3 mbps globally.

"Half of the world's population is now online, which is a testament to the speed with which digital connectivity is helping to improve people's lives. The increase in internet users in developing economies is particularly encouraging," said Simon Kemp of We Are Social. "Given this latest data, it's probably time for us to stop referring to social as 'new media', and integrate it more seamlessly into our day-to-day activities." 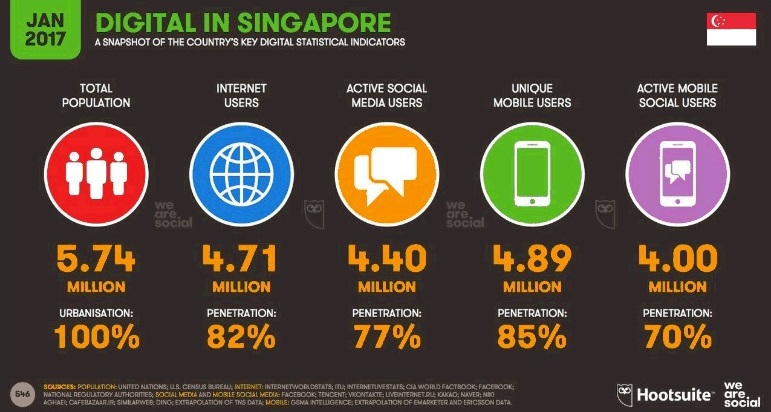