There is a net increase of 96 active entities in F&B service activities, finds Handshakes
Lynette Tantanlyn@sph.com.sg@LynetteTanBT
Leila Laileilal@sph.com.sg@LeilaLaiBT
The local food and beverage (F&B) sector continued to draw entrepreneurs in the first half of this year despite being buffeted by the Covid-19 pandemic.
PHOTO: ST FILE

Not for weak stomachs

THE local food and beverage (F&B) sector continued to draw entrepreneurs in the first half of this year despite being buffeted by the Covid-19 pandemic.

Between January and June, there was a net increase of 96 active entities in F&B service activities, which include restaurants, cafes, food caterers, food kiosks and bars. This is as 1,132 firms joined the sector while 1,036 were deregistered, according to data analysis firm Handshakes, studying data from the Accounting and Corporate Regulatory Authority (Acra).

In the same period last year, there were 1,494 newcomers to the sector while 1,135 called it quits, yielding a net increase of 359 firms.

This study is the first of a series by The Business Times (BT) and Handshakes, called the BT-Handshakes Data Series. It is a regular project collaboration to give insights on various business sectors of Singapore, using data from Acra.

Industry watchers said some players may be seizing opportunities turned up by the crisis, such as diminished competition and increased demand for takeaway food.

Neeraj Sundarajoo, CEO of food procurement platform Zeemart, noted that there have been new F&B openings, particularly by large and well-funded companies.

This is as the crisis has led some of their competitors to shutter, while the number of diners has not changed, said Mr Sundarajoo, whose firm has served F&B establishments such as Saizeriya and Meatsmith.

In addition, there may be more outlets and equipment that outgoing operators are letting go at "better pricing".

"That's what the bigger boys are trying to capitalise on. They have the ability and appetite," Mr Sundarajoo added. 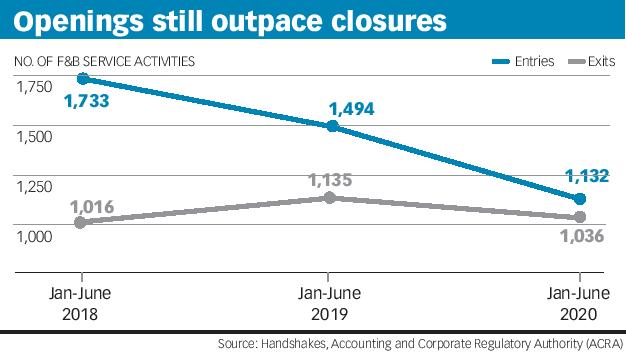 Andrew Kwan, group managing director of investment firm Commonwealth Capital, noted that the number of outlet closures could be even higher than the Acra data on deregistered firms is able to reflect. This is because the closure of an established chain would result in multiple outlets shuttering at once.

Sherri Kimes, a visiting professor at the National University of Singapore's business school, said that some new entries could be the result of plans made well before the pandemic emerged, as in "poor timing".

But the pandemic has also created room for firms with "innovative ways" of doing takeaway food, she noted.

Similarly, Deepika Chandrasekar, senior analyst at Euromonitor International, said it is likely that entrepreneurs entering the F&B sector now have something "technologically-relevant" to offer as digital formats and convenience are currently sought after. Such offerings could be digital self-ordering kiosks, delivery and takeaway options or digital in-store experiences, she added.

On the other hand, Mr Kwan said some people could be turning "entrepreneurs by circumstance, not by choice".

"In the recessionary environment we're in because of Covid-19, it's not surprising that those who are displaced... might consider starting up their own business," said Mr Kwan, whose firm's F&B portfolio includes Pastamania, Swissbake and The Soup Spoon.

Watchers also noted that the F&B industry is widely viewed as easy to enter. Jochen Krauss, Singapore managing partner at Simon-Kucher & Partners, said: "We are all consumers visiting cafes and restaurants, and we think we know what is not going right and what we would do better to make it a great customer experience."

Yet, newcomers with weak stomachs and shallow pockets may do well to think twice about entering an industry that's been hit hard by the pandemic and become tougher to succeed in, they warned.

"Unless you have a strong brand or a compelling product, I think the risk is high to enter the market," said Mr Wong, who has spent at least 20 years in the industry. "It's best to wait a while till market sentiment improves."

In addition, people "oversimplify" the F&B industry, said Mr Krauss. "If you talk to industry veterans running successful restaurants, they will tell you how crazy tough it is, how thin the margins are, how everyone should think twice before opening up another restaurant or cafe."

Mr Kwan also said that margins have been eroded, particularly by rising rents. In the early 2000s, they ranged within the teens; now (before the crisis hit), a best-in-class operator would only be able to achieve a single-digit per cent margin.

And since rental costs are largely fixed, a revenue drop of 50 per cent would effectively double rental costs in proportion to revenue, making it impossible to survive in conditions like the current pandemic, he added.

Indeed, the F&B sector's overall profitability appear to have declined over the last two years.

Total profits for the industry fell from S$131.8 million in 2018 to S$99.6 million in 2019, according to Handshakes' study of corporate filings for those financial years. (However, the 2019 figure may be incomplete, as Acra has given companies a 60-day extension for the filing of returns due between May 1 and Aug 31.)

"From the outside, (the F&B industry) looks very attractive to enter. But when you enter it, you'll find that it's very, very tough. There are many aspects one needs to look into," said Mr Sundarajoo.

The biggest problem of many food businesses is that the unit economics and profitability are not well thought through, he added.

It becomes a vicious circle, according to Mr Sundarajoo. "When you can't get the unit economics right, you will never get enough margin to expand. And when a Covid-type situation happens, you'll take a beating and can't get back on your feet."

Simon-Kucher's Mr Krauss said many F&B firms are not pricing their offerings correctly or using sustainable methods of generating demand, even in good times. Instead, they depend on promotions, loyalty schemes and monetary discounts to attract customers.

Still, that people are venturing into the sector despite the challenges is a sign that entrepreneurship is alive and well in Singapore - they just need to be far more careful about doing so during a crisis, the observers said.

Mr Kwan said: "As a die-hard entrepreneur, I believe that in crises like these, there will be gaps in the marketplace, needs not being fulfilled. But there is going to be quite a bit of overlap... I would encourage a bit more care and diligence for anyone who wants to go into not just F&B but any business, at this present time."

He suggested fostering open dialogue between new entrants and industry veterans, so that newcomers can learn from the experience and mistakes of established players.

Mr Krauss agreed: "Every government and society should foster (entrepreneurship) because it's the only guarantee for economic progression and growth. But you could be more diligent and see if you should really go into F&B, whether your concept is really new and innovative and in demand, and you can deliver above average returns, because that's the only way you can survive."

[LONDON] Britain has detected another new variant of the coronavirus, Health Secretary Matt Hancock said on...

[SINGAPORE] One imported patient in Singapore has been confirmed to be infected by a potentially more contagious...

[BRUSSELS] European Union member states have started to prepare their procedure to implement a new trade deal with...