Siow Li Senlisen@sph.com.sg@SiowLiSenBT
Despite the threat from online shopping, it is not all gloom at Singapore's retail scene with some landlords continuing to invest and upgrade malls.
PHOTO: VIVOCITY

DESPITE the threat from online shopping, it is not all gloom at Singapore's retail scene with some landlords continuing to invest and upgrade malls.

That is because online shopping - while growing - remains low at just 6.1 per cent of overall retail sales, going by October's retail sales data released by the Department of Statistics. And the more savvy landlords have adjusted quickly to the disruptive environment caused by e-commerce and consumers' rapidly shifting tastes.

Some of Singapore's retail real estate investment trusts (Reits) is a case in point - they are among the market's best performers.

The 12 retail S-Reits averaged a total return of 23 per cent in the first 11 months of 2019, according to Singapore Exchange data.

Mapletree Commercial Trust, which owns Singapore's largest mall VivoCity, posted a total return of a whopping 51 per cent in the first 11 months of 2019. 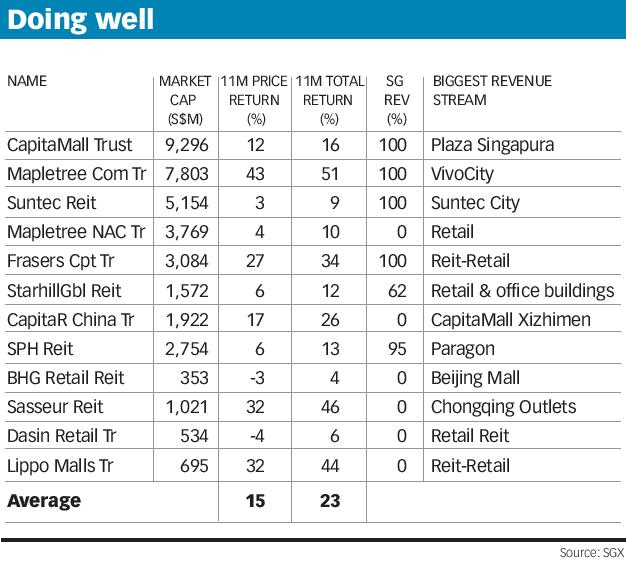 E-commerce is more of a medium- to long-term threat to physical retail malls, said Adrian Loh, UOBKayHian head of research, Singapore. "Of course, some malls are better able to fend off this threat due to their location near major transport hubs. Thus, some of the retail Reits have not seen negative rental reversions," said Mr Loh.

The retail market is in a two-speed mode, where footfalls and demand are concentrated at the top malls, said Pay Chia Chee, Cushman & Wakefield, senior manager, retail.

"This trend is accentuated by changing consumption trends which favour experiential retail and the convenience brought about by e-commerce. As such, landlords who are able to deliver best-in-class retail experiences and provide a variety of retail offerings will continue to look for opportunities to build or redevelop malls," said Ms Pay.

Shoppers today want an experience - they are looking for an entire retail experience beyond purchasing goods and services, said Ms Pay.

"They are open to building affinity with a brand and all its associated collateral. In response, landlords are working with retailers to reinvent malls and rethink the best ways to curate creative spaces. ION Orchard is one such mall," she said. Although e-commerce continues to be an overhang for physical retail, the annual average proportion of online sales to retail sales remains relatively low at around 5.6 per cent, she said.

The majority of retail sales are still done at physical stores and points to the relevance of brick and mortar retail. There is also evidence of e-commerce retailers - such as Love, Bonito which has opened its third and largest store (more than 6,000 sq feet) at Funan - expanding their physical footprint in malls.

"The retail landscape is ever-changing, and is expected to remain fluid as retailers and landlords adjust to the latest trends," said Ms Pay. 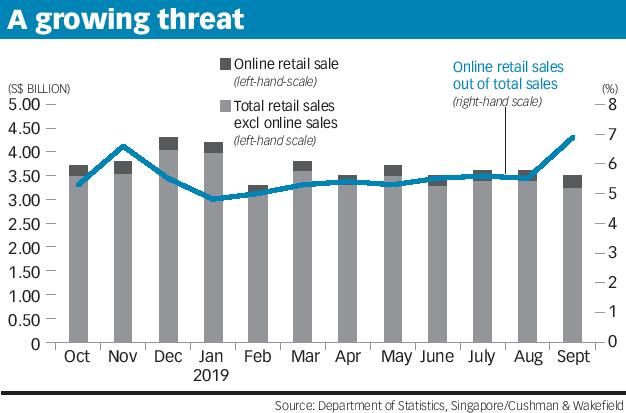 Singapore retail sales contracted 4.3 per cent year-on-year (yoy) in October, worse than market expectations, clocking its ninth consecutive month of decline since February 2019. October's online sales at 6.1 per cent of overall retail sales was down from September's 6.9 per cent, the highest since November 2018.

Besides embracing online commerce, shopping malls are also catering to tourists. Alice Tan, Edmund Tie & Company's (SEA) senior director, research & consulting, said that shopping malls are rapidly going beyond the conventional bricks-and-mortar mode of retail to embrace online commerce as a strategic thrust in their asset enhancement initiatives. "At the same time, technology adoption and capturing consumer behaviour and shopper patterns are essential for mall owners and retailers to cope with the labour crunch and reach out to customers effectively," she said.

"Coupled with increasing competition in the region with bigger and better malls and the quest among cities for the accolade as the 'retail destination of choice', the urgency for Singapore malls to refresh themselves becomes even more important so as to gain traction in the tourism industry," said Ms Tan. Established online retailers - such as Taobao and Love, Bonito - have moved into physical retail space for an omnichannel approach, she noted.

"We might see more asset owners adjusting their business strategies - such as introducing more mixed uses in their assets where possible - to attract customers from a wider market base such as residents, visitors and the workforce," said Ms Tan.

Retail rents in prime areas such as Orchard Road are expected to remain flat while falling further in secondary locations, said Wong Xian Yang, Cushman & Wakefield's senior manager of research (Singapore and South-east Asia). "Assuming the US dollar to Singapore dollar exchange rate remains the same, we expect rents to exhibit flattish growth for 2020 and prime rents in Orchard Road to remain at current levels (S$312 per sq foot)," he said.

"The sluggish economic outlook has led to lower consumer expenditure. Yet at the same time, vacancy rates in Orchard remains low, tourist arrivals are poised to increase and Orchard remains a highly sought-after location for retailers," said Mr Wong. The fall in secondary rents will accelerate, he said. Secondary rents have been on a general downtrend since 2015, and overall rents seem to be stabilising, based on Urban Redevelopment Authority data, he said.

Central region rents are up slightly at 0.5 per cent year to date (Q1-Q3 2019), after falling 16.6 per cent cumulatively since 2015. "Barring an unforeseen economic crisis, the worst is likely over as landlords and retailers are adjusting to the current retail landscape," he added.

[BEIJING] China quarantined 94 air passengers arriving from Seoul after three people on the flight were discovered...

[HONG KONG] Hong Kong shares sank more than one per cent in the opening exchanges on Wednesday, resuming a retreat...

SINGAPORE shares pulled back on Wednesday morning after...