Singapore market clocks 12.6% increase in first half, and is 6th biggest for Swiss watches
Chuang Peck Mingpeckming@sph.com.sg@PeckmingBT
The Hour Glass posted a "modest" 4 per cent rise in sales to S$720.9 million, but its profit-after-tax leapt by a hefty 41 per cent to S$71.4 million for the financial year ending March 2019.
PHOTO: THE HOUR GLASS

IN THE first half of this year, when Swiss watch exports grew by only 1.4 per cent globally, the Singapore market clocked a strong 12.6 per cent growth to 599.5 million Swiss francs (S$845.3 million), making this Little Red Dot the sixth biggest market for Swiss watches.

What a difference a year makes, and how the tables have turned.

Last year, the Singapore market languished, chalking up just 0.6 per cent growth for the whole year to 10.7 billion Swiss francs from the 2017 figure. Global exports outperformed this, registering an impressive 6.2 per cent growth.

The Swiss watch export figures released by the Federation of the Swiss Watch Industry reflect only what local watch retailers order - not sales to final consumers.

242 new Covid-19 cases in Singapore, including 1 in the community and six imported

Industry observers put the rise in orders in Singapore in the first half of this year to restocking by retailers.

But the sales and profit figures of The Hour Glass and Cortina, Singapore's two biggest retail chains, haven't been shabby.

Cortina overcame a challenging business environment in the same period to deliver "record financial results". Sales stayed steady at S$460.8 million, but its net profit surged 33.2 per cent to a high of S$30.8 million.

While their results were mostly for 2018, they also covered the first three months of this year. 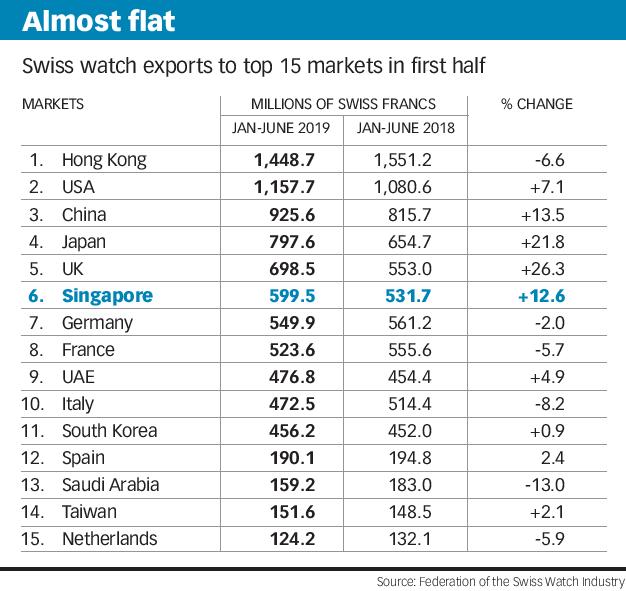 Federation of the Swiss Watch Industry numbers show that shipments to Hong Kong, the world's largest Swiss watch market, fell 6.6 per cent in the first six months to 1.5 billion Swiss francs, hit partly by the political protests in the former British colony.

The UK's imports of Swiss luxury timepieces, on the other hand, picked up steeply with a 26.3 per cent spike - a trend attributed to UK retailers' stocking up because of the fear of shortages after Brexit.

Exports to the UK surged to 698.5 million Swiss francs in the six months to June, making the country the fifth biggest market for Swiss watches.

Shipments to China, the third biggest market, rose 13.5 per cent to 925.6 million Swiss francs over the same period.

Among the top 15 Swiss watch markets in the first half of this year, only four double-digit growth rates. Four posted single-digit increases and seven - mostly European markets - posted drops.

Switzerland supplies more than 90 per cent of the world's luxury timepieces, with more than half of these ending up in Asia; this region's share of the market grew slightly to 54 per cent in the January-to-June period.

The slowdown in the growth of Swiss watch exports had started late last year. A markedly negative base effect pointed to a relatively flat start for 2019, but shipments for the first half of the year still performed better than expected, said the Federation.

It said: "While part of the increase can be attributed to particular circumstances - such as anticipating the effects of Brexit and an exhibition of rare items in China - the overall performance remained positive and points to an encouraging trend in the sector for the year as a whole."

Henry Tay, chairman of The Hour Glass, has tipped global Swiss watch export growth to slow from last year's 6.2 per cent to around 3 per cent for the 2019 full year, but he indicated that Asian demand would remain the key growth driver.

Cortina chairman Antony Lim is also expecting a softer market this year, but believes that Cortina "is well-positioned to weather the uncertain market conditions".