Uptick in luxury watch sales in 2017

Global sales of high-end pieces fell in 2015-2016. Recovery is expected to continue this year
Chuang Peck Mingpeckming@sph.com.sg@PeckmingBT
The IWC booth at the Salon International de la Haute Horlogerie (SIHH) in Geneva. Exports of Switzerland's luxury watches to Singapore, like its watch shipments to the rest of the world, are picking up after two years of decline.
ST PHOTO: WONG KIM HOH

EXPORTS of Switzerland's luxury watches to Singapore, like its watch shipments to the rest of the world, are picking up after two years of decline.

Singapore was one of the four markets among the top 10 markets for Swiss timepieces where watch shipments fell in December. But its drop was bigger than in the other three markets: US (-9.5 per cent), UK (-3.9 per cent) and Germany (-10 per cent).

Local industry observers say the slip in the December watch exports to Singapore is likely to be seasonal, reflecting the tail-end of the Christmas sales period.

Singapore among worst hit by investment cutback after US tax reform

Global sales of upscale timepieces were hit in 2015 and 2016 by, among other factors, sluggish economic growth, China's crackdown on corruption and the impact of terrorist attacks.

Swiss watchmakers, who accounted for up to 90 per cent of the market, also had to weather significant overstocking in Hong Kong - their biggest market - and a heavy dependence on wholesale distribution, which intensified the swing in sales.

Sales have since bounced back. The Federation of the Swiss Watch Industry reports that Swiss watch exports rose 2.7 per cent last year to 19.9 billion Swiss francs. Shipments to Hong Kong rose 6 per cent, while that to China - Switzerland's third biggest watch market - 18.8 per cent. 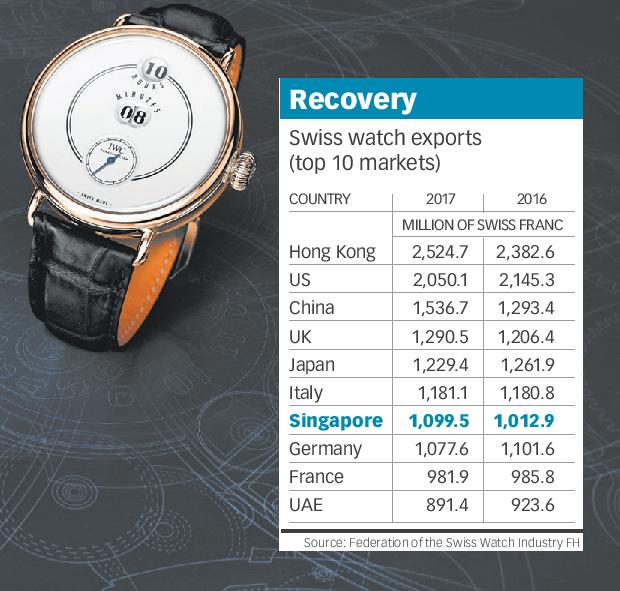 Swiss watch exports have, however, not returned to the 2015 pre-decline level of 21.5 billion Swiss francs. The recovery in 2017 is expected to be extended into this year.

Rene Weber, a watch-industry analyst at private bank Vontobel in Zurich, wrote recently: "Most of the inventory reduction by the major retailers was done in the first half of 2017; we therefore expect Swiss watch export growth of five per cent in 2018."

Nick Hayek, chief executive of the world's biggest watchmaker Swatch Group, which posted a 5.8 per cent increase in sales at constant exchange rates to 7.9 billion Swiss francs in 2017, told Reuters news service: "We are seeing high-single-digit growth in January, despite last year having the impact of Chinese New Year as well. The indication from the sell-out is eight to nine per cent, compared with a year ago, so it's a very good start."

Mr Hayek expects that for the whole of 2018, growth would be in the "high single digits" in constant currencies for the Swiss-based Swatch, which owns brands like Omega, Longines, Tissot and Harry Winston.

The group's rival, the Richemont Group, has not given its outlook for 2018, but has reported that its sales grew 12 per cent at constant exchange rates to 5.6 billion euros (S$9.1 billion) for the six months ending September 2017. Profits surged 80 per cent to 974 million euro.

The Hour Glass co-group managing director Michael Tay said: "The underlying economic mood turned positive in the past few months and this contributed to improved performance of the Group." He said it is hard to predict "sustainable trends in a market prone to swift changes" and "a challenging global watch sector", but that the retail chain expects to stay in the black till the end of March.

Similarly, The Hour Glass's local rival Cortina Holdings said its sales rose 15 per cent to S$210.5 million for the six months ending September 2017; its net profit rose from S$5.8 million a year ago to S$9.2 million. Cortina is also tipped to remain profitable for its full financial year, "competitive market conditions" notwithstanding.

READ MORE: Revolutions in time in the Weekend magazine