Analysts expect its price to remain supported at US$1,300 an ounce in the coming months
Andrea Sohsandrea@sph.com.sg@AndreaSohBT
The price of gold, which has risen 12 per cent so far this year, has dropped from a 13-month high since the US Federal Reserve's hint that interest rates will go up in December.
PHOTO: AFP

THE price of gold, which has risen 12 per cent so far this year, has dropped from a 13-month high since the US Federal Reserve's hint that interest rates will go up in December.

Still, analysts are expecting the gold price to stay supported - especially with geopolitical tensions elevated and economic uncertainty in the developed economies expected in the next few months.

The gold spot price fell below US$1,300 an ounce last Thursday, after the US Federal Reserve struck a hawkish tone by signalling that it would impose three rate hikes next year, causing the US dollar to rally. The yellow metal traded at US$1,293.67 an ounce at 8 pm on Monday.

At its meeting last Wednesday, the Fed also said, as expected, that it would from October start to reduce its holdings of about US$4.2 trillion in US treasury bonds and mortgage-backed securities acquired since the 2008 global financial crisis.

George Milling-Stanley, head of gold strategy at State Street Global Advisors, said the gold price was pressured lower by the Fed's more definite tone on the rate hike in December and the three rate increases next year. "It was the level of determination in the tone that hurt the gold market."

But he views the price drop as a "knee-jerk response", and does not expect it to continue. Referring to the trend in the last four times the Fed had raised interest rates, he said investors tend to go long on (or bet on an increase in) the US dollar and short on gold, ahead of these hikes.

"And when we get the reality of the hike - and this has happened with all four so far - people gradually unwind those trades, and the US dollar goes down and gold goes up."

Furthermore, added Phillip Futures analyst Zhou Shiwei, whether the December rate hike actually materialises will depend on future economic data. "Although the Federal Reserve has been hawkish, the probability of a December rate hike will be low if the inflation data turns out to be disappointing."

Striking a contrarian view, OCBC commodities economist Barnabas Gan said that the prospect for another Fed rate hike, coupled with lower global liquidity levels as the US begins to reduce its balance sheet, is "the most persuasive driver" for lower gold prices.

Surveying the macroeconomic climate across the world, Mr Milling-Stanley noted that there will be uncertainty in the direction of US monetary policy when the current term for Fed chairman Janet Yellen ends in February.

"After February, I have no idea what's going to happen, except that we will have more uncertainty. And that will be good for gold."

In Europe, it is still not clear how Brexit will be implemented. 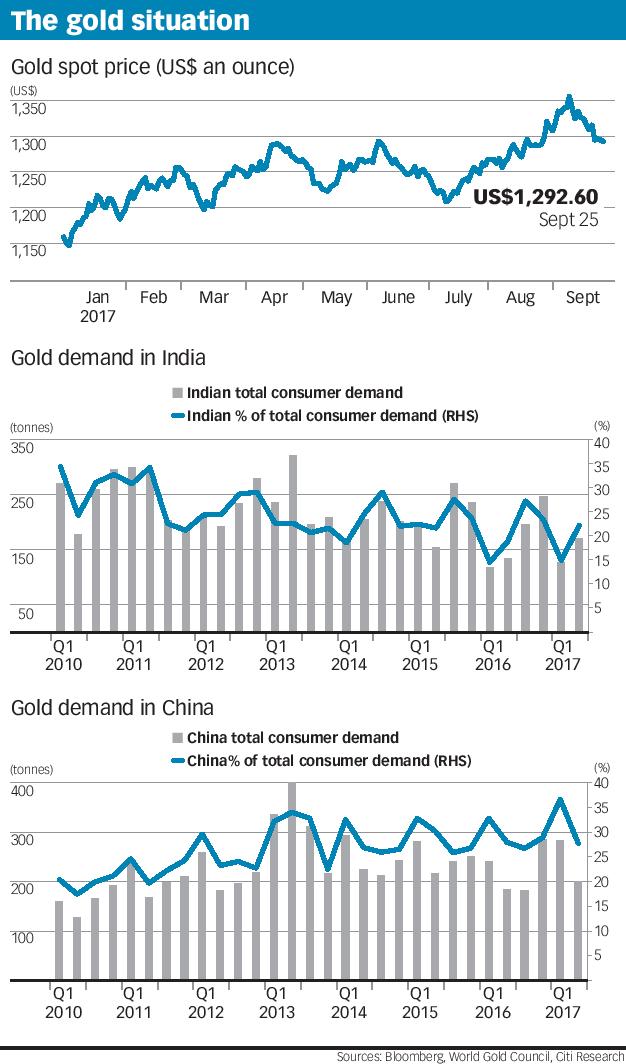 At the same time, healthy economic growth in Asia is expected to spur demand for both gold jewellery and investments such as exchange-traded funds or gold bars and coins, he added. Jewellery and investment demand from China and India made up 37 per cent of global gold demand last year, going by data from the World Gold Council.

Citigroup analysts are also expecting Indian demand for gold to recover towards the year-end from a weak third quarter, as fabricators adjust to the new tax framework and marketing campaigns garner retail interest.

In China, the Golden Week holidays in October and the Chinese New Year in mid-February should boost jewellery retail sales, they said in a Sept 20 market outlook report.

Looking ahead, analysts are expecting gold prices to find support at US$1,300 an ounce in the next few months.

Ms Zhou described this level as "strong psychological support", and added: "It is highly likely gold will be consolidating at around this level for the next month. If the prices break US$1,280 an ounce, gold prices will continue to move down."

Mr Gan has a year-end forecast of US$1,250 for the yellow metal. This remains conceivable, he said, if the market moves to focus on the "relatively rosier market fundamentals and potentially higher interest rates into 2018".

Mr Milling-Stanley expects gold to try to cross the resistance level of US$1,350 an ounce in the next six to 18 months. If that happens, speculative money will return to the gold market, like it did in 2011, he said.

In the coming months, investors should monitor US economic data, including those on the labour market, core inflation and the impact of hurricanes Harvey and Irma, said Union Bancaire Privee (UBP) equity analyst Nevine Pollini.

"Geopolitical tensions between the US and North Korea, new terrorist attacks and continued concerns over the ability of President (Donald) Trump's administration to deliver on its promises should also be key to watch," he added.

Mr Milling-Stanley said, however, that instead of focusing on short-term movements in the gold price, investors should look at the impact of diversifying into gold in their overall portfolio, as gold prices are often negatively correlated to other asset classes.

"My experience and all the available research suggest that the addition of small quantities of gold will properly balance portfolios and improve risk-adjusted returns."

US homebuilder confidence fell to a four-month low in January

[WASHINGTON] US homebuilder confidence slipped to a four-month low in January as firms became slightly less...

[SINGAPORE] The number of new cases in the community has increased from four cases in the week before to 18 cases in...

US: Stocks gain ahead of Biden inauguration

[NEW YORK] The Nasdaq led US stocks higher early Wednesday ahead of the inauguration of President-elect Joe Biden...

SP Group has acquired Engie's stake in Sino-French Energy Services (SFES) in Chongqing for an undisclosed sum, the...

[THIMPU] Bhutan received 150,000 coronavirus vaccine shots on Wednesday, but the Himalayan kingdom has insisted that...