Gold soared to a record high on Monday as investors rushed into the safe-haven commodity on concerns about heightened China-US tensions, spiking virus infections and a lack of progress on a new stimulus bill in Washington.
PHOTO: REUTERS

[NEW YORK] Gold soared to a record high on Monday as investors rushed into the safe-haven commodity on concerns about heightened China-US tensions, spiking virus infections and a lack of progress on a new stimulus bill in Washington.

Dollar weakness was a big factor behind gold's takeoff, analysts said, as the greenback continued its retreat against the euro and other major currencies.

The fall in the US currency comes amid expectations that the Federal Reserve will keep interest rates lower for longer and that the economy could underperform those in other regions due to the coronavirus.

"A further escalation of tensions between China and the US, with the tit-for-tat embassy closure, was the most obvious reason for the change in market tone," said Rupert Thompson, chief investment officer at Kingswood.

"But the continuing uncertainties over the prospects for the economic recovery may also have contributed," he said. 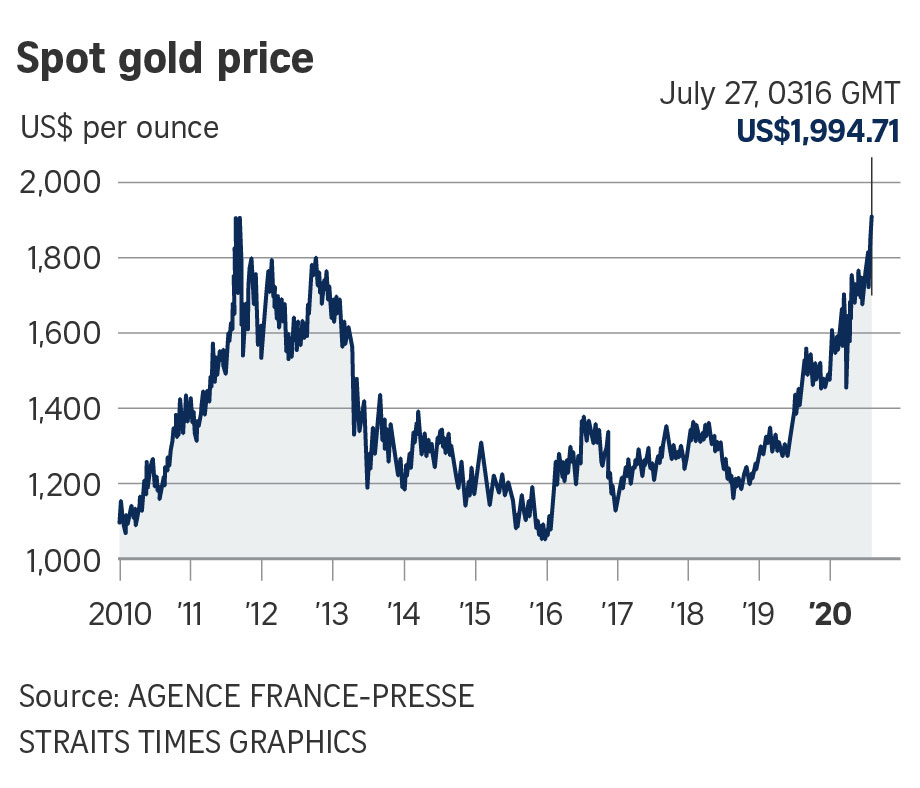 Relations between the world's two superpowers took another negative turn when the US mission in Chengdu was ordered to shut in retaliation for the forced shutdown of the Chinese consulate in Houston, Texas.

'WORRIED WHAT COMES NEXT

"Technically, the superpowers are all-square in this specific tete-a-tete - but investors are worried about what comes next," said Mr Campbell.

As gold rose, stock markets - a riskier investment - wobbled, with investors fretting over the impact of the virus on the economy.

In Europe, only Frankfurt held steady at the close after a key survey showed that German business confidence rose for the third month in a row in July. London and Paris both ended lower.

But Wall Street stocks finished solidly higher, with the tech-rich Nasdaq surging 1.7 per cent in a reversal from weakness late last week.

The chief executives of Apple, Amazon, Google and Facebook are scheduled to appear Wednesday for a hearing that will look at whether Big Tech has attained too much dominance as they have become increasingly central to the global economy.

The event is part of a news-jammed week in the United States that also includes a trove of major earnings reports, a Federal Reserve meeting and the first assessment of second-quarter growth, which is expected to be historically bad given the shutdown of the American economy.

Venezuela resumes direct oil shipments to China despite US sanctions

Clean energy pivot will yield green jobs, but time needed to fill them

All eyes on whether Opec will raise production

[WASHINGTON] US President Donald Trump said on Thursday that delivery of the coronavirus vaccine would begin next...

THE following companies saw new developments that may affect trading of their securities on Friday.

FOOD and beverage (F&B) play Jumbo Group is looking to acquire a 75 per cent interest in popular dumpling noodle...

[TOKYO] Core consumer prices in Tokyo fell 0.7 per cent in November from a year earlier, marking the biggest annual...

Dyson to invest £2.75b in Singapore, Philippines and UK

Clean energy pivot will yield green jobs, but time needed to fill them