Herd of bulls could push gold past US$1,600 per ounce

A clutch of geopolitical and economic factors could do that, but predictions are still tricky
Anita Gabrielanitag@sph.com.sg@AnitaGabrielBT
Gold's ascent has been petering out lately, but a low-yield environment amid waning global macros, shaky geopolitics and rate-cut expectations in the US could give renewed oomph to the bullion rally and push the yellow metal past US$1,600 an ounce.
PHOTO: REUTERS

GOLD's ascent has been petering out lately, but a low-yield environment amid waning global macros, shaky geopolitics and rate-cut expectations in the US could give renewed oomph to the bullion rally and push the yellow metal past US$1,600 an ounce.

London-based mining analyst at Global Equity Research Venkat Ramana Nandyal said it is likely that gold prices will hit that mark next year: "Most central banks have been cutting rates in the last six months to pre-empt a slowdown. As a result, gold prices have gone up by some 20 per cent. An increase of between 5 and 7 per cent from hereon wouldn't be a difficult bridge to cross."

Gold, a traditional safe-haven asset, has benefited from a confluence of risk factors - the US Federal Reserve's dovish stance, the US-China on-off trade spat, unremarkable economic data and Brexit jitters; its price jumped from a summer low of US$1,385 an ounce to US$1,557 early last month. This year alone, gold is up just over 17 per cent.

It had softened as a result of some calm in the US-China trade war front, but the dispute has since flared up again, with the US' issuing of travel-visa bans on Chinese officials and its putting eight Chinese firms on a blacklist ahead of key high-level talks.

In this fluid situation, analysts say the gold bulls are not about to run out of steam. The gold-buying binge by the People's Bank of China as a hedge against large holdings of the dollar amid strained ties with the US could also be an effective backstop.

Analysts at TD Securities wrote in a recent note: "The fundamentals point to firming gold. Some US$15 trillion worth of investment-grade paper is yielding negatively, and there is downside pressure on US rates as investors aggressively seek yields.

"In contrast, gold is in contango and offers positive yield."

The house added that a US$1,600 level for gold could be on the cards once focus shifts "from headlines to fundamentals", given that little has changed in the macroeconomic narrative. 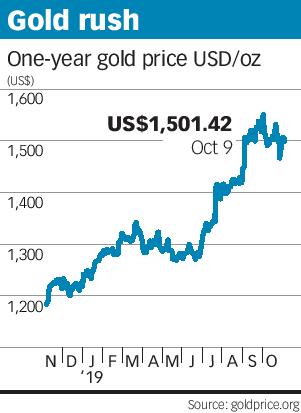 OANDA's senior market analyst for the Asia-Pacific, Jeffrey Halley, said this is "not a gold story but a haven-flow story". In other words, gold's next move up or down will not be defined by the metal's fundamentals but its appeal as a risk hedge.

Another fillip for gold lies in the signs of rising inflation in the US, said Fidelity International's lead cross-asset strategist Wen-Wen Lindroth.

"Any expectation of eventual fiscal stimulus suggests that inflation breakevens are very cheap at current prices. As a result, we are positive on gold as an inflation play".

CMC Markets' Margaret Yang suggested that a major catalyst needs to be in the offing, for gold - now trading at a critical level of US$1,500 an ounce now - to hit that high mark. Triggering factors include aggressive rate cuts down the road or the US Fed pushing through with quantitative easing (QE4) amid a spreading trade war and moribund economic data.

One rate cut this year may not be enough to push gold to that level, but if there are two cuts (which at this point is unlikely), gold prices could surge, said one analyst.

Axi Trader's Asia-Pacific market strategist Stephen Innes said: "I'm pencilling in one more rate cut this year but three more next year. Ultimately, I see the 10-year US bonds trading at 1.25 per cent then. Gold will struggle to make explosive gains if the US 10-year bonds remain above 1.5 per cent, so the metal needs a lot of help from a weaker US economy."

OANDA's Mr Halley said that US$1,600 would be a challenge unless there is a severe geopolitical event or the world tips into a sudden, deep recession requiring emergency easing by central banks globally.

For now, it is a tricky business predicting when the shiny metal could reach that mark. Mr Innes said: "It is virtually impossible to predict with any degree of certainty the short-term direction for gold in these unsettled times."

In August, when it hit US$1,500 an ounce for the first time in six years amid a global chorus of central bank easing and protests in Hong Kong, Edward Meir, a consultant at broker-dealer INTL FCStone ventured that there was a small possibility that the price of the metal could hit US$1,600 an ounce soon.

That hasn't happened - yet.

Mr Innes expects gold to climb to US$1,600 next year and push still higher until the US Fed starts to raise interest rates. "So, there could be considerable headroom in gold's medium- to long-term price outlook," he said, adding that it will peak next year at around US$1,650 an ounce.

Indeed, September was a historic month for gold. The latest report of the World Gold Council (WGC) said that holdings in global gold-backed exchange-traded funds (ETFs) hit an all-time high during the month, with inflows of nearly US$4 billion.

Part of that may have been led by the volatility in the metal's prices.

OCBC Bank's economist Howie Lee said gold had an over-5-per-cent peak-to-trough decline in September, hitting a low of US$1,472.49 an ounce on the last day of the quarter.

He attributed the decline to profit-taking before the close of the third quarter, which he said was "understandable", given that prices had shot up as much as 10 per cent over the quarter alone.

Global Equity Research's Mr Venkat replied: "We have seen that after the last two recessions in early 2000 and 2008/2009, the floor price of gold increased. Currently, gold producers are using US$1,300 an ounce as a cut-off for their reserves and resources. If the floor price rises to US$1,500 an ounce, more low-grade mines will go into production.

"Gold retail demand, though, will take a hit, but when the new floor price is set, it will stabilise."