Crude prices plunged as much as 30 per cent following the move, which comes amid an already weak market depressed by the spreading coronavirus outbreak worldwide.

West Texas Intermediate (WTI) crude collapsed below US$30 a barrel while Brent fell to US$31 per barrel - 50 per cent down from how it began the year - in response to last Friday's shocking collapse of the three-year-old Opec/non-Opec alliance.

The surprise move followed a falling out between Russia and Opec. The Saudis had pushed for Opec and Russia, a non-Opec ally, to make deeper cuts to production to support crude prices in the face of the Covid-19 outbreak and consequent global economic slowdown. When Russia baulked at the plan, the Gulf kingdom acted in an apparent bid to force Russia back to the negotiation table.

UMS' factories in Penang and the US reopen at 'limited level', Singapore ops unaffected

Markets may not have seen the end of the bloodbath.

Fidelity International's analyst and portfolio manager James Trafford said: "A number of factors will weigh heavily on medium-term prices, including whether a political solution can be attained to resolve the apparent Opec+ standoff, and how quickly the virus-hit areas return to normal levels of demand.

"But in the near term, it looks entirely possible we could drop to cash costs of production (of Brent at around US$30 per barrel) or even test the lows of around US$27 per barrel seen in 2016".

DBS Group Research slashed projections for Brent by US$10 to an average of US$47-US52/b in 2020, citing a wide supply-demand gap.

In the event the stand-off intensifies and cool heads fail to prevail, DBS said oil prices could plunge... but could likely bounce off "rather quickly" as seen in early 2016, given that US shale supplies will be severely affected. 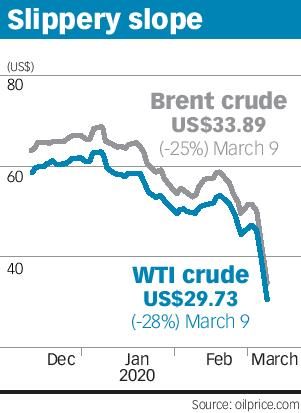 Apart from the giant US shale fracking industry, oil and gas-related stocks were hammered across the globe as the commodity's free fall weighed on capex and project FIDs (final investment decisions) in an environment already facing slower contract flows.

"Interestingly, the share price of Keppel has fallen back to the level where Temasek announced its partial offer, which seems to be a good level to bottom fish," noted DBS Group Research analyst Ho Pei Hwa. Last October, Temasek Holdings launched a partial offer to gain control of Keppel at S$7.35 cash apiece (its last traded price prior to the announcement stood at S$5.84).

"The O&M (offshore and marine) segment of Keppel, as well as Sembcorp Marine's (SembMarine) business will definitely be negatively impacted, and analysts may need to lower their new order forecasts," reckoned Carmen Lee, OCBC's research head.

CGS-CIMB Research analyst Lim Siew Khee said if oil prices continue to slide, she will have to slash her order expectations for both the O&M's sector stalwarts this year and accordingly, their earnings forecasts for FY2021.

The cut could be deeper for SembMarine given that it's a "100 per cent pure O&M play" followed by parent Sembcorp which has some 40 per cent exposure to the former, said DBS' Ms Ho. In comparison, Keppel O&M accounts for some 30 per cent of the research house's sum-of-the-parts valuation of Keppel.

As for the smaller offshore players, analysts expect the downturn to spawn consolidation or privatisations.

"The concern will once again sit with the smaller players. That said, compared to the 2014 episode where prices had fallen from a height of above US$100 (a barrel), we are seeing the decline from a less elevated level.

"Consolidation noted across the offshore oil and gas sector over the years could also provide better grounds for the sector to weather the storm, though it ultimately depends on how long this low oil price condition could sustain," said IG Markets' Jingyi Pan.

One big concern may be rising defaults if oil prices stay low. Margaret Yang of CMC Markets warns: "Banks are vulnerable to oil's downturn too, as the memory of 2016 oil crisis is still fresh. Investors need to prepare for rising non-performing loans and higher provisions due to the compound effect of Covid-19 and oil's downturn".

Not everyone seems overly worried.

Eugene Tarzimanov, Moody's Investors Service vice-president and senior credit officer, said a collapse in oil prices should have a limited negative first-order effect on the loan quality of Singapore's three largest banks DBS, OCBC and UOB as they have "extensively provisioned" their oil and gas exposures since the 2015-2016 oil slump.

In addition, he said, the most vulnerable exposures are already classified as non-performing.

"But if low oil prices persist over a prolonged period, the banks will post higher NPLs because of second-order effects, such as a further economic slowdown in Singapore and lower corporate earnings, on top of disruptions already caused by the coronavirus," he added.

Such worries may explain the 7-8 per cent falls in the three banking counters on Monday.

For the broader market, Nigel Green, chief executive and founder of deVere Group, an independent financial advisory and services organizations, said: "The ultimate impact that the oil price war will have on an already vulnerable world economy that's struggling to cope with the spread of coronavirus remains unknown. However, the risk of a short but severe global recession in 2020 has now been heightened dramatically."

Suntec City to waive rents for all tenants for April

SUNTEC City said it is waiving the rents for all tenants for a month, in line with the government's call to boost...

UMS' factories in Penang and the US reopen at 'limited level', Singapore ops unaffected

PRECISION-engineering firm UMS Holdings said on Monday that its factories in Penang and California have resumed...

Virus scrapped your marathon? In Japan, there's an app for that

[TOKYO] When the coronavirus outbreak forced organisers to cancel marathons in the Japanese city of Nagoya, they...