All four VC firms are based in Singapore.

Funds were ranked by their net internal rate of return (net IRR), a measure of a fund's expected returns after factoring in fees and carried interest. Net IRR changes as more capital is deployed and as the life of a fund increases. Preqin's data is based on information declared by general partners, the managers of the funds.

For this set of rankings, Preqin looked at funds with vintage years from 2009 to 2015. Vintage year refers to the year in which the first investment was made.

Three of East Ventures' funds made it into the top five - Fund 1 and Fund 3 ranked first and second with net IRRs of 70 per cent and 65 per cent, while Fund 5 ranked sixth with a net IRR of 23 per cent. East Ventures, an active Indonesia-investor that has backed unicorns Tokopedia and Traveloka, recently announced the close of its sixth fund at US$75 million, more than double the firm's initial US$30 million target.

Openspace's first fund ranked third with a net IRR of 44 per cent. Compared to its peers ranked by Preqin in the top league, the Gojek-backer is newer to the scene but has already made notable investments in startups including CXA Group, which raised US$33 million in total funding from its Series A and B rounds, and US$25 million in a bridge-funding round. 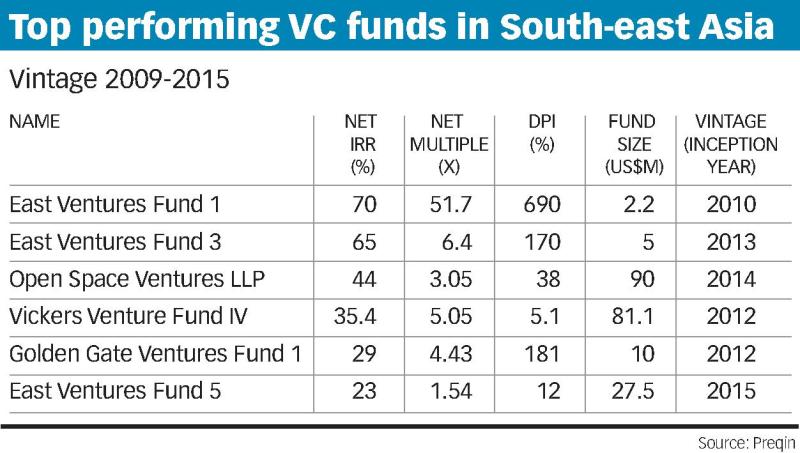 Vickers is the only fund manager out of the four that invests globally. The firm's Vickers Venture Fund IV has a net IRR of 35.4 per cent. Vickers' most notable investment to date is in US-based biotech firm Samumed, which specialises in regenerative medicine. Samumed announced in August last year that it has raised more than US$650 million to date.

Golden Gate Ventures' Fund 1 ranked fifth with a net IRR of 29 per cent. The VC firm has backed property search portal 99.co and online marketplace Carousell. While predominantly an early-stage investor, Golden Gate is teaming up with South Korea's Hanwha Asset Management to raise a growth fund, reportedly at US$200 million, joining a host of other early-stage VCs such as East Ventures and Vertex Ventures to back companies through maturity.

EARLY-STAGE venture capital (VC) firm East Ventures has raised about US$57 million for the first close of its US$88...