The boom in Sea's share price comes amid a rally in technology stocks in the US despite the global economic downturn. Investor appetite has surged for companies with operations in enterprise software, cloud computing, e-commerce, digital entertainment and gaming.

The tech-rich Nasdaq Composite has risen 19.3 per cent year-to-date, outperforming the Dow Jones Industrial Average's -5.37 per cent and the S&P 500's 1.4 per cent. This comes amid a rapid shift to digitalisation for companies and changing consumer habits as the pandemic forces masses of people to go online.

Shares in Sea had been steadily climbing even before the pandemic. The company's share price rose 255.3 per cent in 2019 to close out the year as a top-performing foreign stock on a US stock exchange, beating Chinese tech majors Alibaba and JD.com. 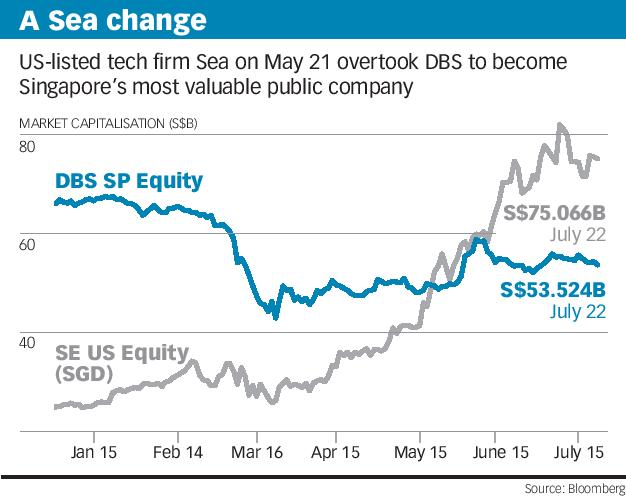 Since its initial public offering (IPO) at US$15 in October 2017, the stock has returned 664.3 per cent, easily beating the NYSE Composite index's return of 9.35 per cent.

At US$114.65 as of the close of the market on July 23, the shares were trading at 19 times Sea's 12-month trailing revenue; the company has been loss-making since its IPO.

Despite this, analysts remain bullish about the group's prospects. According to data from Bloomberg, 13 out of 15 analysts have a "Buy" call on the stock. The consensus target price was US$115.97.

Analysts point to the stability and strong momentum of Garena, which is Ebitda (earnings before interest, taxes, depreciation, and amortisation)-positive, the rapid growth and market share of Shopee, and the prospects of digital finance for the fledgling SeaMoney.

The company also has a strong cash position of US$2.6 billion as at end-March, and firm support from major shareholder Tencent, which owns about 30 per cent of the company.

Sea managed to narrow its net loss to US$280.8 million for the first quarter ended March, from US$689.6 million a year ago, after its revenue more than doubled.

Revenue from its digital entertainment arm rose 113.2 per cent to US$369.7 million as the number of active users and paying users increased.

That said, Sea is exposed to revenue concentration risk, as the top five games account for about 80 per cent of digital entertainment revenue, said JP Morgan analyst Ranjan Sharma in a June 24 report.

Citi, which was among those with a "Buy" call, noted how lockdowns in many parts of South-east Asia have sped up online shopping adoption and accelerated orders and gross merchandise value (GMV) growth at Shopee.

"This, we believe, is due to the relatively low e-commerce penetration among the young and large Internet-using population (over 360 million) in the region," wrote analyst Alicia Yap in a report on July 7.

Research from e-commerce aggregator iPrice, leveraging user data from SimilarWeb and App Annie, found that Shopee was among the top two most used e-commerce apps in South-east Asia in 2019, based on monthly active users. Shopee was also the most visited e-commerce website, chalking up 2.1 billion visits against Lazada's 1.8 billion.

Sales and marketing expenses have continued to be a significant expense for the loss-making firm - it spent US$308.3 million, or 73.2 per cent more, on this in Q1 - though market watchers have mostly stomached it in view of the need for user acquisition and retention.

While e-commerce and digital entertainment are Sea's strong points, some analysts are more cautious about the firm's financial services arm. DBS Group Research bucked the trend when it downgraded Sea from "Fully valued" to "Sell" on July 2, with an unchanged target price of US$72.50.

"We like Sea's gaming and e-commerce businesses although we are less optimistic on the prospects of the hyper-competitive e-wallet business," wrote analyst Sachin Mittal.

It expects SeaMoney to burn cash for a long time as e-wallet market leaders in Indonesia, such as GoPay and Ovo, are far ahead. DBS also flagged revised Indonesian tax regulation for cross-border transactions that might pose some downside risk to Shopee's performance.

JP Morgan gave a more sanguine view of the digital financial services arm. While it acknowledged the heavy losses likely to be incurred by the business, it anticipates strong growth in ShopeePay as Sea pushes for higher adoption across the region through methods such as shipping and cashback promotions, and partnerships with offline merchants.

Mr Sharma wrote in a report on June 24 that SeaMoney is valued at US$4 per share on a price to TPV multiple basis when benchmarked against major global payment companies. "Until SeaMoney shows a path to profitability, it is likely to trade at a valuation discount, in our view."

[SINGAPORE] Indonesia's Bukalapak.com has landed funding from Standard Chartered as it makes progress toward raising...

[HONG KONG] Joe Biden's US$1.9 trillion stimulus proposal was met with a shrug in Asia on Friday as observers said...

'Anything can happen' with Tokyo Olympics: Japan minister

[TOKYO] A Japanese cabinet minister admitted on Friday that "anything can happen" with the coronavirus-postponed...

Trump plans to live at Mar-a-Lago, employ some current aides

[WASHINGTON] Donald Trump plans to fly to his Mar-a-Lago resort in Florida the morning of Joe Biden's inauguration,...