Sharanya Pillaihspillai@sph.com.sg@SharanyaBT
3 -min read
Listen to this article
Venture Capital (VC) firms focused on South-east Asia have raised US$1.33 billion in capital commitments in the first quarter of 2020, more than triple from the same period a year ago, according to a report by deal news outlet DealStreetAsia.
ST PHOTO: LIM YAOHUI
Sharanya Pillai hspillai@sph.com.sg @SharanyaBT
3 -min read
Listen to this article

VENTURE Capital (VC) firms focused on South-east Asia have raised US$1.33 billion in capital commitments in the first quarter of 2020, more than triple from the same period a year ago, according to a report by deal news outlet DealStreetAsia.

Overall, South-east Asia-based VC firms are now armed with about US$4.2 billion in capital, while out-of-region VCs have raised at least US$1.6 billion for their South-east Asia-focused funds.

However, the quarter's fundraise represents a sharp cooling down from the US$2.5 billion in funds raised in Q4 2019. This marks the end of a four-quarter streak of quarter-on-quarter growth in funds raised by South-east Asia-focused VCs.

The exuberance could fade as the full impact of the Covid-19 pandemic has yet to be reflected in the numbers. This is since many capital commitments for funds that closed in Q1 were made before social-distancing restrictions in fundraising hubs such as Singapore.

VCs in South-east Asia lie in wait, even as valuations soften 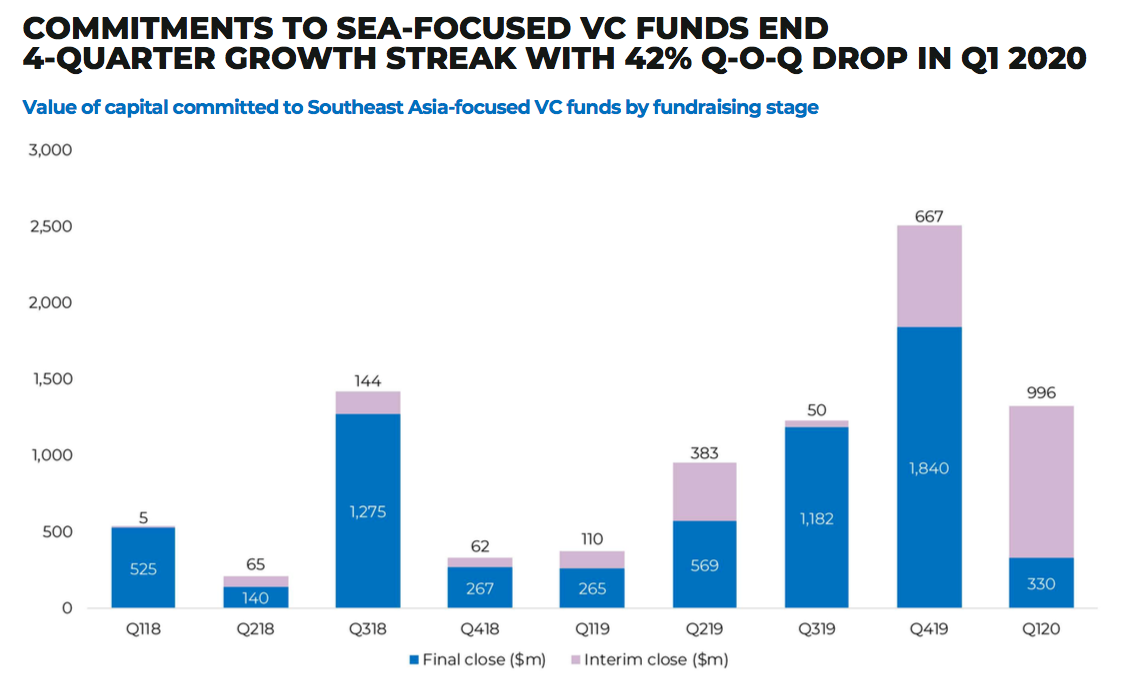 Some US$1 billion of the funds raised in Q1 came from seven funds with managers based within South-east Asia. Singapore and Indonesia accounted for total fund closings of US$865 million and US$161 million respectively.

The remainder of Q1 commitments were secured by venture firms that are helmed by general partners based outside South-east Asia. Venture funds in Malaysia, Thailand, Vietnam and Cambodia did not record any closes for the quarter.

The single largest commitment in Q1 was secured by Singapore-based B Capital, which clinched US$600 million for the interim close of its second fund. The firm, co-founded by Eduardo Saverin of Facebook fame, is targeting to hit the fund's US$750 million hard cap this year.

Other notable raises include Vickers Ventures Partners' US$200 million interim close of its US$500 million fund, and BRI Ventures' US$136 million raise for a US$250 million fund. The former is headquartered in Singapore, while the latter is based in Indonesia.

VCs are set to continue hunting for capital, as 42 South-east Asia-based VCs are currently in the market for US$4.9 billion in funds. Three of the largest funds still being raised are Vanda Global Capital's US$1.5 billion agritech fund, B Capital's US$750 million second fund, and Vickers Venture's US$500 million sixth fund.

Meanwhile, another 11 VCs outside the region are looking to raise US$1.2 billion in capital. These include Ant Financial's US$1 billion Unicorn fund, BAce Capital's US$100 million South-east Asia and India fund, and SoftBank Ventures Asia's fund, which has not disclosed a target.

Overall, the outlook for South-east Asian VCs is challenging. "Industry observers expect capital raising for venture funds to weaken for the remainder of the year, particularly for early-stage funds as investors hold off new fund commitments," the report's authors said.

Given that fund managers are likely to be more cautious with deployments, "this could put downward pressure on startup valuations, although pandemic beneficiaries such as e-commerce, logistics, healthcare and education startups could emerge more resilient", they noted.

VCs in South-east Asia lie in wait, even as valuations soften

STARTUP valuations in South-east Asia are beginning to soften as the industry comes to terms with the economic...

[SAN FRANCISCO] It's a secret, almost. But Silicon Valley is buzzing over a new audio-chat social network which is...

VENTURE capital (VC) firms focused on South-east Asia have raised US$1.33 billion in capital commitments in the...

[BEIJING] Great Wall Motor expects China's overall auto sales in the second half this year to return to the same...

[TOKYO] The dollar edged higher on Monday as worries about a standoff between the United States and China over civil...

MVLLABS raises extended Series A round led by Shinhan Bank