THE recent listing of Singapore's Nanofilm turned the founder, a former academic, and his wife into billionaires overnight - they may not be the last, going by numbers compiled by The Business Times.

According to data compiled using intelligence platform VentureCap Insights and regulatory filings, the founders of 20 prominent Singapore startups already hold equity worth about US$1.77 billion, even though they are some distance from their exits.

At the top of the list - which is based on the firms' last-round valuations - is JustCo, which was most recently valued at over US$1 billion, going by VentureCap (see table). The startup's three co-founders are estimated to collectively own a 23.8 per cent stake in the firm, held directly and via a vehicle called Sing Long Investments. Based on JustCo's latest valuation, that stake would be worth about US$238.2 million.

Grab is excluded from the sample as data is not available for its offshore holding company.

Other notable startups include Carousell, whose valuation of over US$870 million implies a value of US$126 million for the collective stake owned by its three co-founders. At fintech M-DAQ, the two founders hold a total stake currently worth about US$78 million, based on its fundraise late last year.

While these valuations - built up from the investment boom in local startups over recent years - appear impressive, industry players say there's no guarantee the paper gains will eventually translate into real gains, especially with the uncertainties of Covid-19.

The key determinant will be a startup's ability to exit at an attractive valuation, via an initial public offering (IPO) or trade sale.

If the startup undergoes a "down round" - or a fall in valuation at a subsequent round of funding - the value of the founders' stake will also be hit.

However, Jason Edwards, founder of VentureCap and partner at VC firm January Capital, highlights that some founders have already realised partial gains in the pocket.

"It's not all paper wealth, as many of the founders in these startups have already sold some of their shares." 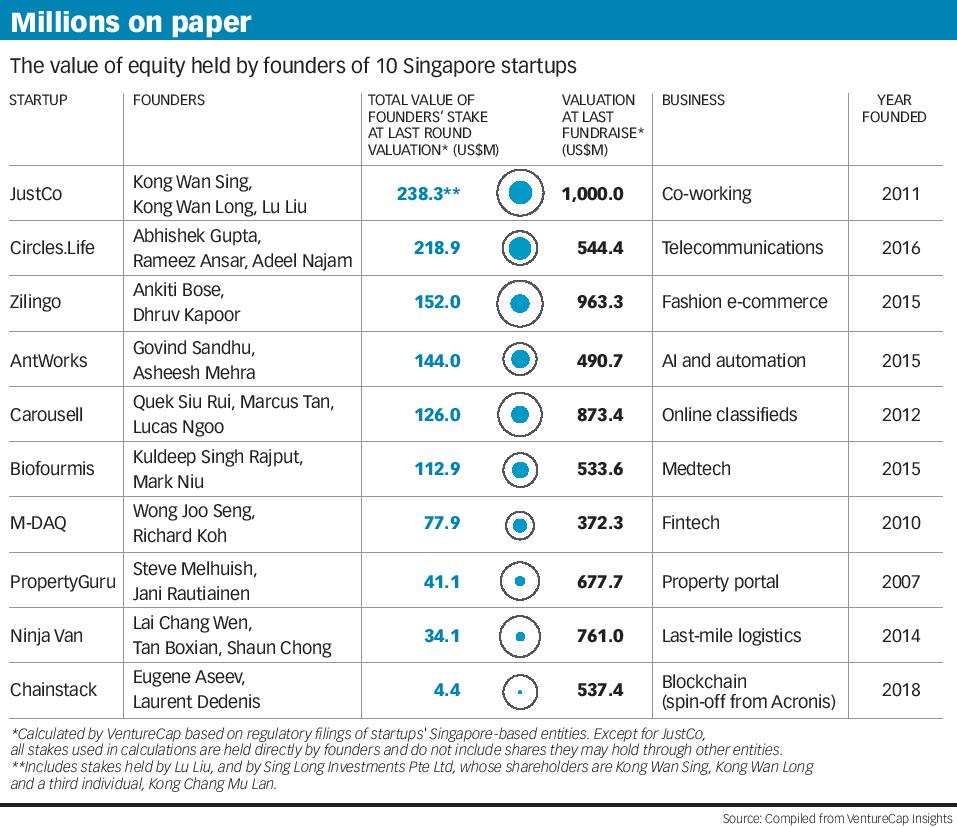 A recent example is Carousell's September fundraise led by Naver, where its three co-founders sold a small portion of shares.

The accumulation in value of founder-held equity shows that "the ecosystem has what it takes for startups to grow, mature and create a lot of value", Mr Edwards said.

And it's not only the founders who benefit from such "wealth" accumulation.

Quek Siu Rui, chief executive of Carousell, said "what's great about this maturing startup ecosystem" is that his firm can reward employees with a "meaningful-sized" stock option plan.

"This encourages our teammates to stay focused on building an enduring company," he said.

Akshay Bhushan, a partner at Lightspeed Venture Partners, similarly sees the value of founders' stakes as a "great sign of maturity, as it indicates that there are scale companies now in the ecosystem which are highly-valued by late stage investors".

Many such late-stage investors are clearly confident that Singapore founders can build mainstream businesses, said Jeffrey Seah, partner at Quest Ventures. "This is the first wave of the establishment of 'new wealth' in Singapore," he said.

While the accumulation of value in founder-held equity is encouraging, how much of it translates to actual returns will depend on startups' valuation at IPO or a trade sale.

In the current climate, startups badly hit by the pandemic may undergo a "down round", noted Li Jianggan, chief executive of venture builder Momentum Works.

He said: "I think the most challenging companies to exit would be the ones that have a high valuation and require significantly more capital to grow further, but somehow the pandemic has halted, or even reversed, that growth... It will become harder for founders to exit with a windfall."

But some like Mr Bhushan are optimistic: "(We) have to keep in mind that many of these startups will continue to grow in value - paper and real - and so net-net we should see greater levels of realised value over time, while there will be a portion which may exit at lower values."

Beyond the exit environment, the investment terms will also affect founders' actual returns. Specifically, in the event of a trade sale, any onerous terms that founders had agreed to may eat into their returns. For instance, an investment with a 2x liquidation preference clause would ensure that the investor gets paid double his principal amount, ahead of founders and earlier investors.

In the current environment, startups hoping to exit may not be as fortunate as Nanofilm, which listed on Oct 30 with a valuation of S$1.7 billion. This valued the combined 53 per cent stake of Dr Shi Xu and his wife at under S$950 million. According to the Bloomberg Billionaires Index, Dr Shi's fortune surged to S$1.2 billion as at Oct 30.

Chua Kee Lock, chief executive of Vertex Holdings, believes that the wave of exits among Singapore startups will only happen from 2022 to 2023.

"We always tell startups while it's important to think about exits, you must still fundamentally focus on your technology, your customers… and of course, strengthening the management team," he says.

Lai Chang Wen, chief executive and co-founder of Ninja Van, adds: "The first milestone for any founder is to convert a company's paper value into real business value. This is achieved by creating sustainable companies which can either go public or get acquired."

"Doing so will give founders the financial ability to either start the next wave of startups, or support the growth of new startups."

When exits do happen in the Singapore ecosystem, industry players expect that there will be a virtuous recycling of capital unlocked from the realised gains of founders.

"As more and more homegrown startups succeed regionally, the landscape will give rise to more founder-mentors, success stories and smart investors to fuel the next wave," said Steve Melhuish, an angel investor and co-founder of PropertyGuru.

Vishal Harnal, partner at 500 Startups, said: "Now the next milestone is really getting the exits. And I think what that would create is even more investment into the ecosystem and an even better cadre of people who would be leaving otherwise traditional jobs to take a punt at becoming entrepreneurs," he said.

Successful exits could also spur more diversity in the types of startups. Joel Shen, special counsel at Withers KhattarWong, noted that most of the 20 startups shortlisted by BT are in more mature verticals, such as telecommunications, e-commerce, logistics, and fintech. He mused: "I wonder what this list will look like in another five years' time, and whether new verticals such as edtech, medtech, or deeptech will emerge."

Ultimately, all of this is part of a bigger trend of technology driving new avenues of wealth creation, said Mr Harnal. "The billionaires of South-east Asia are not going to be continually born out of old industry. It's going to be in technology."

VENTURECAP'S data is pulled from regulatory filings of startups with Singapore-incorporated parent firms, thus excluding those with offshore parent entities like Grab. The data accounts for issuances of equity.

To derive the US$1.77 billion figure, BT shortlisted 20 Singapore-based startups on VentureCap, with last-round valuations ranging from US$187 million to US$1 billion. The top 10 startups by valuation (see table) account for US$1.1 billion worth of founder-held equity.

The other 10 startups in BT's sample are: ShopBack, MatchMove, Funding Societies, Carro, Deskera, Capillary Technologies, Reddoorz, Nium, Near and Insider.

VentureCap’s data is pulled from regulatory filings of startups with Singapore-incorporated parent firms, thus excluding those with offshore parent entities like Grab. The data accounts for issuances of equity.

[LISBON] Europe's biggest technology conference, the Web Summit, will return to Lisbon in full force as a massive in...

[NEW YORK] Compass, a SoftBank-backed company that's among the largest real estate brokerages in the US, has...

[NEW YORK] The dairy industry is working hard to make milk cool again and turn around years of weak sales.

[TOKYO] Japan's ruling party will urge the government to lay out a big, decade-long spending programme to promote...

Battered by virus and oil slump, biofuels fall out of favour

[LONDON] Hit by the coronavirus pandemic and a sharp drop in oil prices, biofuel demand has declined for the first...