33% jump in sector fuels 14.6% manufacturing expansion in September; economists now looking at 4.7% to 5.1% Q3 GDP growth
Vivien Shiaovshiao@sph.com.sg@VivienShiaoBT
The predicted slowdown of Singapore's manufacturing output has not come in as sharply as economists feared for the month of September, as the electronics cluster continued to power ahead with double-digit growth.
PHOTO: REUTERS

Slowdown in the works?

THE predicted slowdown of Singapore's manufacturing output has not come in as sharply as economists feared for the month of September, as the electronics cluster continued to power ahead with double-digit growth.

The Economic Development Board on Thursday reported that factory production for September increased 14.6 per cent compared to a year ago, beating economists' expectations of 10 per cent in a poll by Bloomberg.

With this stronger-than-expected showing, economists say that the gross domestic product (GDP) for Q3 is likely to be upgraded from the 4.6 per cent seen in the government's recently released advanced estimates.

Economists that The Business Times spoke to expect the final Q3 GDP figure to fall between 4.7 per cent and 5.1 per cent. As a result, full-year GDP for 2017 could potentially reach 3 per cent or even higher.

Prime Minister Lee Hsien Loong mentioned earlier this month that 2017 GDP growth could be at the upper end of the government's 2-3 per cent forecast range due to a strong showing in manufacturing, which makes up a fifth of Singapore's economy.

September's factory data was a closely-watched one, as earlier exports figures showed that electronics exports for the month unexpectedly fell for the first time after 10 months of solid growth.

But doubts about September's industrial production were put to rest on Thursday as electronics proved it still had momentum, lifting overall factory growth. If the traditionally volatile biomedical sector was excluded, manufacturing output grew 16.1 per cent.

Electronics remained the star performer once again, expanding 33.2 per cent in September year-on-year. This was driven mainly by semiconductors and computer peripherals at 46.2 per cent and 25.9 per cent respectively.

However, growth within the electronics cluster was uneven. Output of the infocomms & consumer electronics segment declined 7 per cent while data storage output fell 24 per cent.

Riding on the gains of the electronics rally, the precision engineering cluster had robust growth of 15.4 per cent year-on-year. The modules & components segment, in particular, grew 24.5 per cent, on account of higher production in dies, moulds, tools, jigs & fixture, optical instruments and metal precision components.

Output of the chemicals cluster rose 9.5 per cent, with growth recorded in all segments, particularly the other chemicals and petroleum segments which increased by 29.5 per cent and 10.9 per cent respectively. 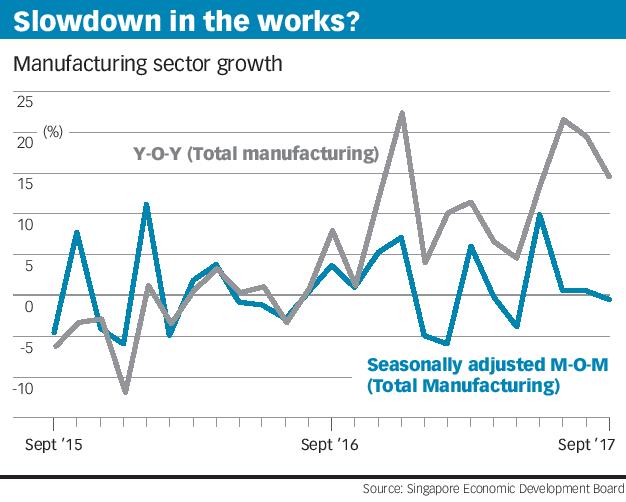 The biomedical manufacturing cluster's output grew 8 per cent in September, a steep moderation from its 25.5 per cent growth previously.

This was led by the medical technology segment which rose 11.5 per cent due to higher export demand for medical devices, while the pharmaceuticals segment increased 6.8 per cent with higher production of biological products.

General manufacturing expanded 4.3 per cent, on the back of the food, beverages & tobacco and miscellaneous industries segments at 8 per cent and 2.9 per cent respectively.

While last month's overall factory output grew faster than expected, it was not all good news.

On a seasonally adjusted month-on-month basis, manufacturing output had decreased 0.5 per cent in September. Even after stripping out the biomedical sector, it still fell 0.1 per cent.

September's growth of 14.6 per cent year-on-year was lower than August's 19.5 per cent, which was revised upwards from an earlier 19.1 per cent. It was also lower compared to July, which clocked the fastest pace of growth this year at 21.6 per cent.

Economists were mixed on whether manufacturing is expected to continue its stellar run, with some cautioning against over-optimism.

Nomura economist Brian Tan said that economic growth "remains narrowly based, boosted by the semiconductor sector with limited spillover effects on the rest of the economy, which remains broadly weak".

OCBC economist Selena Ling was more optimistic. She said: "While we anticipate some moderation in manufacturing momentum in the last quarter of 2017, partly due to the higher base last year, the manufacturing engine has clearly not stalled yet."

She added that full-year GDP growth could come in around 3.3 per cent, assuming that manufacturing growth in the last quarter "normalises from the heady 3Q17 pace back to a single-digit growth speed".

DBS economist Irvin Seah was also bullish on the electronics rally, expecting it to remain the bright spark in the medium term.

He said: "Though there have been some signs of moderation in electronics in recent months, the pace of growth has otherwise remained exceptionally strong. Any further softening in coming months will likely be attributed to base effect, seasonal factors and production capacity constraints rather than weakness in demand."

[BENGALURU] Australian shares advanced on Thursday, helped by gains among technology and gold stocks, as broader...

[LONDON] A third pandemic lockdown appears to be having little impact on rates of COVID-19 in England, researchers...