Last year, it worked on over 1,700 projects to prepare Singapore's workforce for advanced manufacturing tech
Amit Roy Choudhurybtnews@sph.com.sg
A*Star chairman, Lim Chuan Poh said "A*Star has maintained the momentum achieved in RIE 2015 in 2016 and had laid the foundation... to set the pace on delivering more impactful outcomes for the RIE 2020 framework, and Singapore's future economy".
ST PHOTO: SEAH KWANG PENG

AS A part of efforts to prepare the Singaporean workforce for advanced manufacturing technologies, in 2016 the Agency for Science, Technology and Research (A*Star) worked on more than 1,700 projects with the industry, of which at least half were related to manufacturing. It also deployed over 200 licences to companies, 60 per cent of which were in the manufacturing sector.

The research agency also seconded more than 60 research scientists and engineers to local SMEs, about half to companies in the manufacturing sector, according to A*Star chairman, Lim Chuan Poh.

He added that A*Star will establish, by the end of this year, model factories at two locations. The two facilities will be set up at A*Star's Advanced Remanufacturing and Technology Centre (ARTC) and at A*Star's Singapore Institute of Manufacturing Technology (SIMTech). According to Mr Lim, these factories will allow companies to experience the latest manufacturing technologies first-hand in a learning environment, and collaborate with stakeholders to test and jointly develop innovative solutions for their processes.

The research agency's Tech Access scheme will provide companies, particularly SMEs (small and medium-sized enterprises), access to A*Star's base of advanced manufacturing facilities and training expertise to build capabilities in advanced manufacturing through the use of advanced machine tools, new processes, prototyping and testing. Another initiative, Tech Depot, offers SMEs a suite of easy-to-use technologies that can help them improve productivity. This is a new addition to the SME Portal that went live on April 20, 2017, Mr Lim said. It will showcase ready-to-go (RTG) packaged solutions such as inventory-tracking, and business process automation systems.

Mr Lim noted that this was the first year of the new RIE 2020 (Research, Innovation and Enterprise) plan in which the government has budgeted S$19 billion for Singapore's science and technology research over the five-year period till 2020. 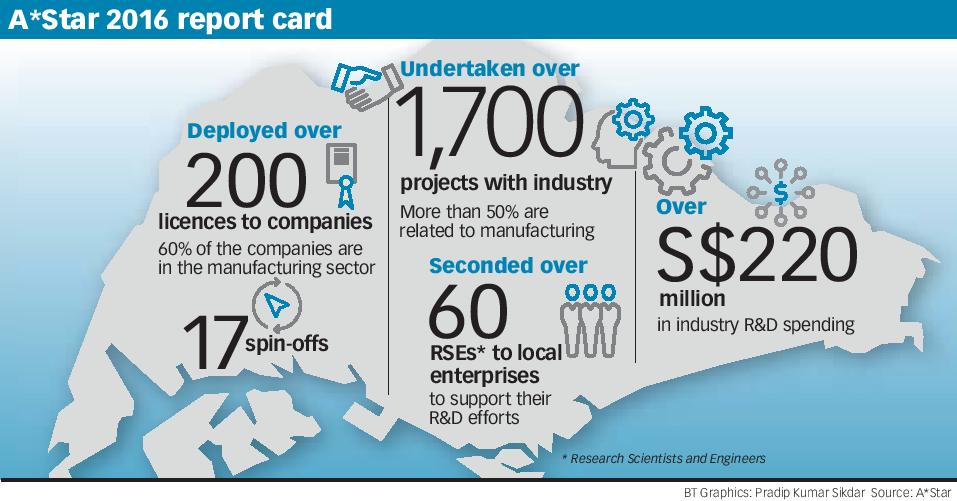 A*Star has maintained the momentum achieved in RIE 2015 in 2016, the chairman said, adding that this had laid "the foundation... to set the pace on delivering more impactful outcomes for the RIE 2020 framework, and Singapore's future economy".

A*Star's chairman added that manufacturing remains a key pillar of Singapore's economy, making up about 20 per cent of GDP (gross domestic product) in 2016, which translates to approximately S$80 billion. "Last year (2016), the manufacturing sector comprising nearly 200 MNCs/LLEs (multinationals and large local enterprises) and 9,000 SMEs also accounted for half a million jobs, or 14 per cent of the total employment numbers. Based on the Economic Survey of Singapore 2016, the value-added per worker was above S$180,000.

"Clearly, the manufacturing sector anchors high-value activities in Singapore, leading to growth and good jobs for Singaporeans," Mr Lim said and added that in February, factory output expanded 12.6 per cent, "and this has in turn boosted exports and the overall economic growth numbers."

Mr Lim noted that investments in R&D (research and development), technology adoption especially by SMEs, as well as a highly skilled workforce are imperative to the competitiveness of the local manufacturing sector. "To encourage multinationals to continue to pick Singapore as a choice location for their high-value manufacturing activities, we must be a first mover in growth sectors, and a location where they can pilot and test-bed cutting-edge technologies."

In this context, A*Star said that food and nutrition (F&N) is an emerging sector in Singapore. "One of Singapore's successes in the last research funding tranche (RIE 2015) has been to grow an R&D ecosystem in the F&N and consumer care sector. This has resulted in the creation of close to 1,000 new R&D jobs, up from 300 in 2010."

The A*Star chairman said the RIE 2020 plan is integral to the CFE (Committee on the Future Economy) recommendations that aim to keep Singapore's economy competitive. "Among the various recommendations, innovation is seen as a key pillar for Singapore to navigate an uncertain economic climate."

He added that, in order to better align national, economic and social goals, the government had announced the S$4.5 billion Industry Transformation Programme at Budget 2016. "The Industry Transformation Maps (ITMs) are targeted at promoting growth and competitiveness across 23 industries accounting for over 80 per cent of our GDP. These include Precision Engineering, Aerospace, Electronics, Energy & Chemicals, as well as Marine & Offshore."

A*Star will further sharpen its R&D efforts for better economic outcomes to align with the Industry Transformation Maps, Mr Lim added. "For example, the Precision Engineering Industry Transformation Map was the first industry-specific roadmap to be rolled out for the manufacturing sectors. Its goal is to shift the industry into new growth areas and enhance manufacturing processes. This will be done by nurturing complementary segments such as additive manufacturing, robotics, advanced materials, sensors, and lasers and optics."

Mr Lim noted that it is important that companies understand the crux of the Future of Manufacturing (FoE). "This revolution is not just about adopting individual advanced technologies, rather it is about the connection and integration of these various components into a synergistic and highly efficient manufacturing process, so that it is responsive to the needs of the customers," he said.

Amendment note: The story has been amended to reflect that the A*Star chairman's surname is Mr Lim and not Mr Poh.

[SINGAPORE] Three of the four community cases reported on Thursday (Jan 21) have been linked to a cluster at BS...

[AMSTERDAM] KLM said it would cut an additional 1,000 jobs in 2021 and warned on Thursday that government plans to...

[WASHINGTON] Government data released the day after Joe Biden entered the White House made clear the scale of the...

Britain's IG to buy tastytrade for US$1b in US foray

[LONDON] Britain's IG said it plans to buy US trading platform tastytrade for US$1 billion, venturing into North...