THE stronger global trade outlook is reigniting Singapore companies' interest in doing business with - and conducting due diligence on - their overseas counterparts, especially in the region.

Overseas credit searches by local businesses rose by 3.04 per cent last year following a 1.16 per cent decline in 2016, according to the Singapore Commercial Credit Bureau (SCCB).

The Asean region accounted for the highest proportion of overseas credit searches by Singapore firms for the fifth consecutive year, followed by East Asia and Europe.

The share of credit searches on East Asian companies also went up, climbing marginally from 26.70 per cent in 2016 to 26.79 per cent last year. According to SCCB, China, Hong Kong and South Korea were the most searched countries within East Asia by Singapore firms.

Credit searches on Europe declined for the second straight year, its share of searches down from 13.13 per cent in 2016 to 12.51 per cent in 2017. Britain, Italy and Germany were the most searched European countries by local firms.

Meanwhile, credit searches made by foreign companies on local firms surged 12.85 per cent last year, compared with a 1.21 per cent decline in 2016. Europe registered the highest proportion of credit searches done on Singapore companies, followed by North America and East Asia. 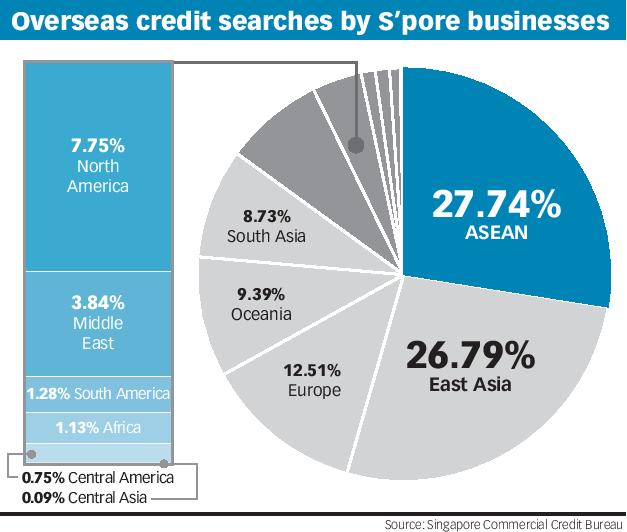 "The improved trade environment in 2017 has encouraged higher levels of credit vigilance among local firms over the past year. This is especially the case for the rise in overseas searches done on companies in Asean and East Asia," said SCCB chief executive Audrey Chia.

"While credit searches on European companies have declined slightly, we would expect due diligence activities to pick up in 2018 with the ratification of the bilateral trade and investment deal between Singapore and the EU in the coming months."

"The deterioration in financial strength of companies generally reflects the spillover effects of weaker business conditions seen in 2016 and 2017. Moving into 2018, we expect the fundamentals of companies to strengthen moderately," Ms Chia said.

US to push production of protective gear for coronavirus

Govt has resources and will to act if more support needed to mitigate Covid-19: Heng

Sanofi to pay US$11.9m to resolve US drug kickback probe

[BOSTON] Sanofi SA has agreed to pay nearly US$11.9 million to resolve allegations that it used a charity that helps...

US to push production of protective gear for coronavirus

[WASHINGTON] The United States will invoke a federal defence law to boost production of masks, gloves, gowns and...

[NEW YORK] The US dollar slid to a seven-week low against the Japanese yen on Friday after Federal Reserve Chair...