Angela Tanangelat@sph.com.sg
Despite the turbulence unleashed by the Covid-19 pandemic, GIC's portfolio remains resilient and Singapore's foreign reserves under its charge have been protected by the sovereign wealth fund's defensive stance and focus on its mandate, which is to first preserve and then enhance the value of the assets under its care.
PHOTO: BLOOMBERG

DESPITE the turbulence unleashed by the Covid-19 pandemic, GIC's portfolio remains resilient and Singapore's foreign reserves under its charge have been protected by the sovereign wealth fund's defensive stance and focus on its mandate, which is to first preserve and then enhance the value of the assets under its care.

Over a 20-year period spanning April 2000 to March 2020, GIC's portfolio achieved an annualised nominal rate of return of 4.6 per cent. Taking into account global inflation, its annualised real rate of return stood at 2.7 per cent over the same period, compared to 3.4 per cent for the 20-year period spanning April 1999 to March 2019. (see amendment note)

GIC is one of the three reserves management entities in Singapore, alongside the Monetary Authority of Singapore (MAS) and Temasek Holdings. The three supplement the annual Budget through the Net Investment Returns Contribution (NIRC), the single largest revenue source for the Singapore government.

Speaking to the media over a Zoom conference call on Monday, GIC chief executive officer Lim Chow Kiat said the reduction was largely due to the way GIC's 20-year rolling return is computed, rather than Covid-19 or recent market movements. For the past two-three years, very strong returns from the tech bubble years dropped out of the rolling 20-year window. GIC uses the rolling 20-year real rate of return as its primary evaluation metric for its investment performance.

"This year again we have to bear that drop. What happens next year is a function of what drops out but also what comes in. We cannot predict what happens in the next six-nine months but we do hope that with less of the drag from 20 years ago, and if this year turns out better and we are able to add value on top of what market can deliver, perhaps next year when we meet we can have a more positive picture."

On its latest performance, he said, "GIC continues to deliver a resilient long term return, which means we have generated a return over and above global inflation. We have protected the reserves and in fact, added value, despite the uncertain investment environment.

"This was helped by the fact that this time round we came into the pandemic with a defensive position." 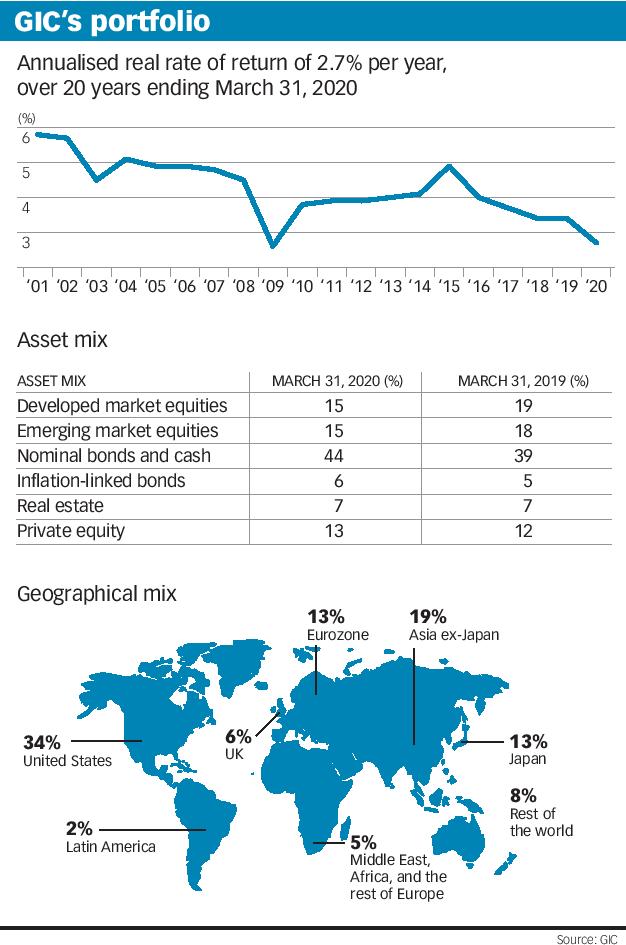 GIC had not anticipated the pandemic to be the catalyst for the global downturn, but efforts to diversify and reduce its portfolio risks have enabled it to cushion the impact and better navigate the market turmoil.

In recent years, it has taken an increasingly cautious macro stance on concerns over rising risks such as high asset prices, weakening fundamentals, limited policy room, and growing geopolitical uncertainties, which could have significantly and permanently impaired its portfolio.

"Fortunately, we had pre-emptively de-risked by reducing our allocation to equities in favour of cash, and evaluating investment transactions with more caution," Mr Lim said.

"This defensive position has helped cushion our portfolio from the worst of the volatility in the financial markets in the first quarter of 2020."

Global equity markets fell by more than 20 per cent in the first quarter of 2020, the worst quarterly performance since the global financial crisis of 2007-2009, according to the MSCI world Index.

Over the past five years, GIC's portfolio returns have consistently been less volatile than its risk reference portfolio, while providing a creditable, sustained long-term real return, Mr Lim said.

In line with the decline in equity markets, the proportion of developed and emerging markets public equities in GIC's portfolio fell to 15 per cent each of the portfolio mix, from 19 per cent and 18 per cent, respectively the previous year. Private asset allocation grew. The share of bonds and cash rose as these lower risk assets benefited from the flight to safety.

Geographical mix - which reflects the global market composition and bottom-up opportunities sourced by its investment teams - remained stable with the US accounting for 34 per cent of the portfolio, Eurozone 13 per cent, United Kingdom 6 per cent, Asia ex-Japan 19 per cent, Japan 13 per cent, Latin America 2 per cent, Middle East, Africa and the rest of Europe 5 per cent and the rest of the world 8 per cent.

GIC now stands poised to invest the country's foreign reserves and seize opportunities that can enhance long-term returns, Mr Lim said. While healthcare and technology stocks are clear winners amid the Covid-19 outbreak, many are over-priced. Value is emerging in sectors sold down 30-50 per cent by the market. These include the consumer sector, infrastructure and energy, data centres and logistics. GIC remains bullish about the US and Asia. Asean, Taiwan and India have been identified as key as economies diversify their supply chain beyond China.

On whether GIC will continue to keep its defensive stance, Mr Lee said it would depend on how prices move, how opportunities present themselves and GIC's assessment of these two factors.

"We have quite a bit of dry powder that we can deploy,'' he said. "If we can do that, you will see the defensive stance reduce. It is just a natural consequence of deploying capital."

But if the environment worsens, GIC will have to act to protect its capital and may even be more defensive. Over the last year, GIC made almost 60 publicly announced deals.

For now, the timing and the shape of the recovery remain "highly uncertain", Mr Lim said.

Outcomes from the Covid-19 are wide ranging and how they play out depend on the virus; the spillover effect from vulnerable sectors like travel, trade and energy on the economy and consumer behaviour; and policy responses to stabilise markets, support the economy and keep supply chains open.

GIC has identified four major shifts that will shape the investment landscape.

First, uncharted policy making, which has introduced risks for inflation and currencies that investors have not had to contend. Second, intensifying headwinds for globalisation, which is likely to hurt productivity growth and be particularly detrimental to emerging markets that have historically relied on foreign investments and export-led growth.

Third, rising headwinds for Asia, but the region is expected to outperform other regions over the long run. It is estimated that some 40 per cent of global consumption will take place in Asia by 2040, according to a McKinsey report.

And lastly, industry consolidation to rise, where larger companies could become even bigger and stronger.

Amendment note: An earlier version of the article incorrectly stated the 20-year rolling period. The story has been corrected to reflect this. We apologise for the error.

Trump pick for Latam development bank pushes back against critics

How people are reacting to Kamala Harris's VP nod

[LOS ANGELES] The Fresh Prince of Bel-Air is getting turned upside-down as a gritty drama set to be...

[SAN FRANCISCO] Political groups which create websites designed to look like news outlets will no longer get the...