Chia Yan Minchiaym@sph.com.sg@ChiaYanMinBT
The services sector is set to become a stronger economic growth engine this year amid concerns that activity in manufacturing could taper, according to a new survey of private-sector economists.
PHOTO: ST FILE

THE services sector is set to become a stronger economic growth engine this year amid concerns that activity in manufacturing could taper, according to a new survey of private-sector economists.

Even as stronger global growth continues to benefit the Singapore economy, trade protectionism remains a key concern among those polled in the survey conducted by the Monetary Authority of Singapore (MAS).

The economists polled in the MAS’s latest quarterly survey expect the local economy to grow 3.2 per cent this year, unchanged from estimates in the last survey in March.

Official forecasts from the Ministry of Trade and Industry tip full-year economic growth of between 2.5 per cent and 3.5 per cent this year. This comes after the economy expanded 3.6 per cent in 2017, lifted mainly by strong demand for manufacturing exports.

Economists polled by the MAS expect the finance and insurance sector to contribute more to growth this year. The sector is tipped to expand 7 per cent, up from 4.4 per cent in the previous poll.

Over 10,000 firms tapped ESG schemes to grow and transform in first half of 2020

Meanwhile, growth in the accommodation and food services sector is now expected to come in at 2.2 per cent, up from 1.9 per cent previously.

Manufacturing is expected to expand a robust 5.3 per cent this year, also higher than previous estimates of 4.3 per cent. Still, some economists have warned that the sector, which makes up a fifth of the economy, could moderate this year after growing at breakneck speed last year on the back of surging export demand for electronics and precision engineering products.

Other sectors are doing less well.

The outlook for the construction sector has taken a turn for the worse, going by the latest survey, with respondents tipping a contraction of 2.1 per cent. The previous survey, released in March, flagged 1 per cent growth in the sector.

The outlook for private consumption growth has also eased - economists in the latest poll expect a rise of 2.2 per cent, compared with 3.1 per cent in the previous quarter's survey.

Private-sector economists see the threat of a global trade war as the biggest downside risk for Singapore’s economy, the survey showed. Trade protectionism was cited by 84 per cent of respondents as the top risk, down slightly from 88 per cent in the March survey but still significantly higher than 40 per cent in December's poll. 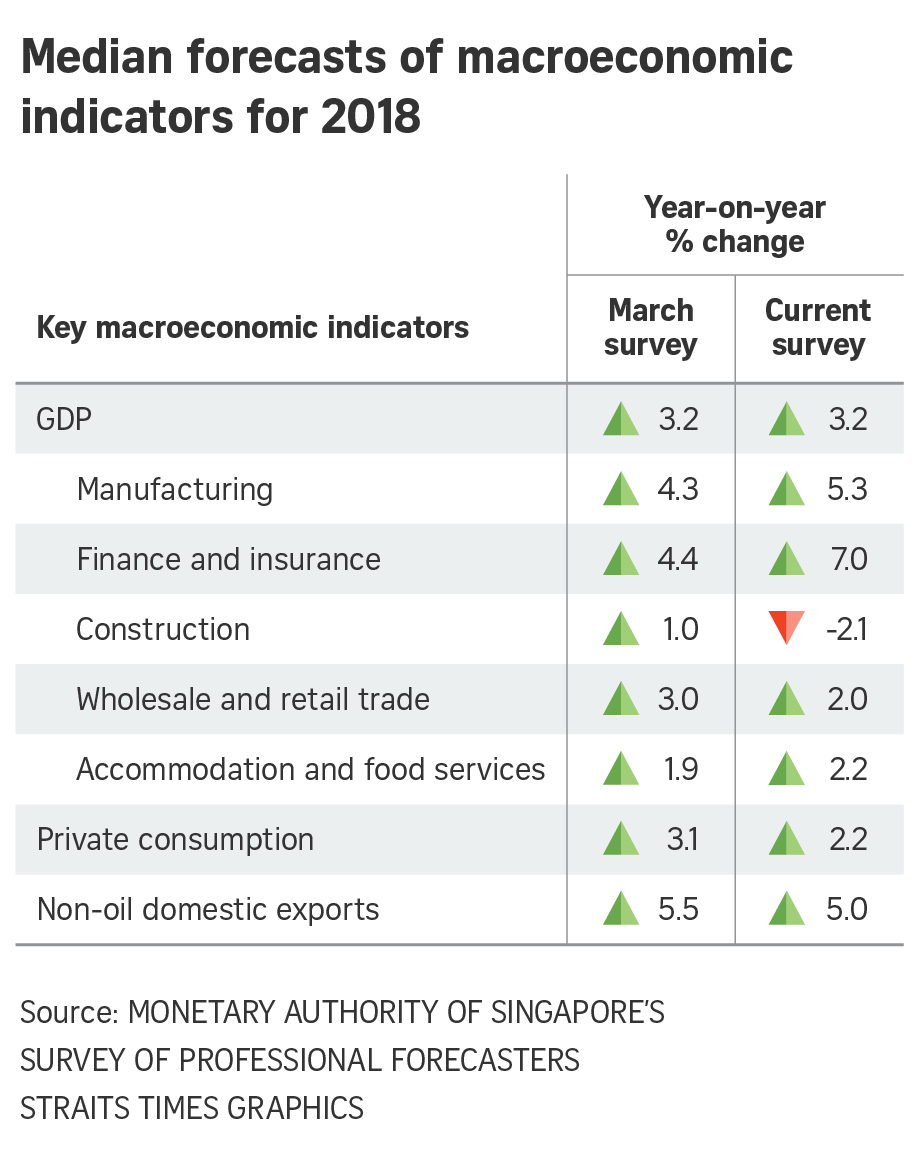 There are also growing worries about the impact of rising interest rates, in particular tightening global financial conditions if the United States Federal Reserve raises rates more quickly than expected. This risk was cited by 47 per cent of respondents, up from 17 per cent in the previous quarter's survey.

Meanwhile, concerns about a slowdown in China appear to have eased, with 21 per cent of respondents flagging it as a key risk, down from 53 per cent previously.

The latest MAS survey reflects the views of 24 analysts who monitor the Singapore economy. It was sent out on May 24, 2018.

249 new Covid-19 cases in Singapore, including 16 in the community

SEMBCORP Marine (Sembmarine) has posted a net loss of S$192.1 million in the half-year ended June 30, due to the...

AMID mixed sentiment across the region and a sombre kick-off to the Q2 reporting season in the US market, the local...

[SINGAPORE] The former chief executive of telcos StarHub and M1, Neil Montefiore, who was known for his candid...