Janice Hengjaniceh@sph.com.sg@JaniceHengBT
Private-sector economists have raised Singapore's 2018 economic growth forecast for the second consecutive time, expecting growth of 3.2 per cent, up from an earlier prediction of 3.0 per cent in December.
ST PHOTO: KUA CHEE SIONG

PRIVATE-SECTOR economists have raised Singapore's 2018 economic growth forecast for the second consecutive time, expecting growth of 3.2 per cent, up from an earlier prediction of 3.0 per cent in December.

They expect growth to moderate to 2.8 per cent in 2019, according to the latest quarterly survey of professional forecasters by the Monetary Authority of Singapore, released on Wednesday.

Conducted in February, the survey saw responses from 24 economists and analysts who closely monitor the Singapore economy.

Their expectations for 2018 growth fall within the Ministry of Trade and Industry's (MTI) forecast for growth ranging from 1.5 per cent to 3.5 per cent, with MTI tipping growth to come in "slightly above the middle" of this range.

Since the last survey in December, economists have grown more optimistic about the finance and insurance, wholesale and retail trade, and accommodation and food services sectors, as well as private consumption.

But they have grown more pessimistic about manufacturing and non-oil domestic exports. Expectations for the construction sector remain unchanged.

Other upsides include the external growth outlook - cited by two in five - and property market performance. Optimism regarding the latter has risen noticeably, with 41 per cent of respondents citing it as a potential upside, up from 27 per cent in the previous survey.

As for downside risks, concerns about trade protectionism have rocketed up with 88 per cent of respondents citing a possible global trade war, up from just 40 per cent in December.

The next largest worry is the threat of a slowdown in the Chinese economy, with just over half of respondents citing it, down from two-thirds previously. Financial sector uncertainty comes in a distant third, cited by less than a fifth of respondents. 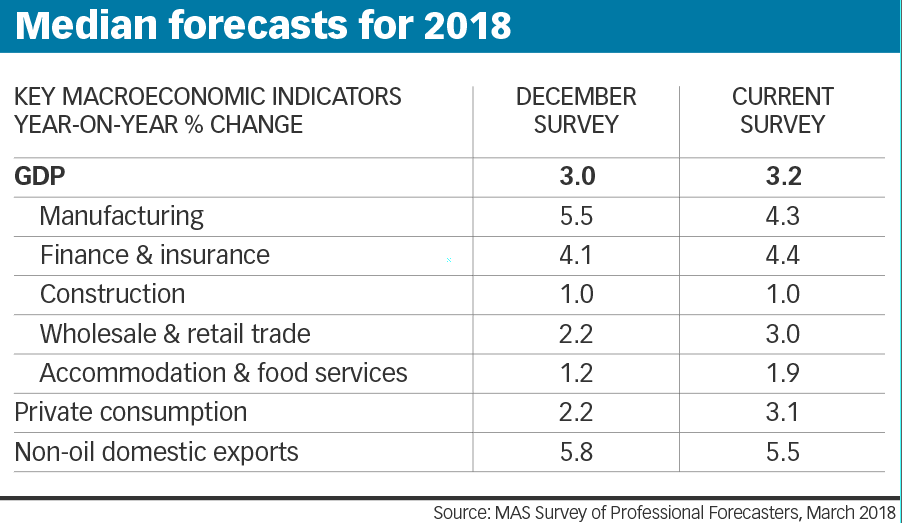 In other forecasts in the MAS survey, economists expect headline inflation of 0.4 per cent and core inflation - which excludes accommodation and private road transport - of 1.5 per cent for the first quarter of 2018.

Expectations for full-year headline and core inflation remain unchanged from the December survey, at 1 per cent and 1.6 per cent respectively.

Also steady are labour market expectations, with respondents predicting an unemployment rate of 2.1 per cent at year-end, unchanged from the last survey.

Saudi prince may have been involved in Bezos phone hacking: UN experts

3Cnergy to sell three plots of land at Puteri Harbour

[LONDON] The lower house of Britain's parliament on Wednesday overturned changes made by the upper house to the...