Economists stick to forecast of 3.2% GDP growth for 2018, but more are wary of external risk factors

Annabeth Leowleowhma@sph.com.sg@AnnabethLeowBT
Confidence in the manufacturing sector as a growth driver has risen, with Singapore's overall economic prospects on track for previous forecasts, according to the latest survey of private-sector economists, which was released on Wednesday.
PHOTO: LIN ZHAOWEI FOR THE STRAITS TIMES

CONFIDENCE in the manufacturing sector as a growth driver has risen, with Singapore's overall economic prospects on track for previous forecasts, according to the latest survey of private-sector economists, which was released on Wednesday.

But a growing number of watchers have flagged external growth as a factor that could affect the economy, although whether it will be a boon or a bane to the Republic is unclear. The domestic property market has also lost some of its shine, on surprise real estate cooling measures.

The economists pegged gross domestic product (GDP) growth at 3.2 per cent for 2018 - unchanged from the year's first two rounds of polls - in the quarterly survey by the Monetary Authority of Singapore (MAS).

The most likely outcome is for the Singapore economy to grow by between 3 and 3.4 per cent, they said, although the chances of growth in the 3.5 to 3.9 per cent window have improved.

US consumer prices accelerate in July

Despite earlier fears of a factory slowdown, the economists have hiked their forecasts for full-year expansion in the manufacturing sector, to 7.6 per cent year on year, from 5.3 per cent in the June survey and an estimate of 4.3 per cent in March.

"The upward revision for the manufacturing sector is mainly attributable to the better-than-expected performance of the sector in the first half of 2018," Maybank Kim Eng economist Lee Ju Ye told The Business Times, noting that manufacturing growth came in above 10 per cent in both the first and second quarters. "I suspect that this was the main factor that attributed to the revision - the new forecast still takes into account a slowdown in the second half."

United Overseas Bank senior economist Alvin Liew said: "Earlier this year, we factored in a slowdown for Singapore’s manufacturing activity in the second half of 2018 due to two factors: The high growth of the electronics cluster in 2017 may result in a slower pace of expansion in 2018; and rising US-China trade tensions may impact the global trade outlook. This could in turn lead to a negative spillover effect on Singapore's manufacturers, who may see a decrease in export orders as well as a dip in overall business sentiment.

"However, the year-to-date industrial production has exceeded market expectations and this is probably one reason for the revised forecast for the manufacturing sector."

Projected growth in accommodation and food services was also bumped up a notch, to 2.9 per cent, from the previous prediction of 2.2 per cent.

But growth forecasts were pared for finance and insurance, from 7 per cent growth to 6.7 per cent; and for wholesale and retail trade, from 2 per cent expansion to 1.5 per cent.

And the construction sector is expected to fare even worse, finishing the year with a contraction of 4.2 per cent - widening from the 2.1 per cent decline that was predicted in June. 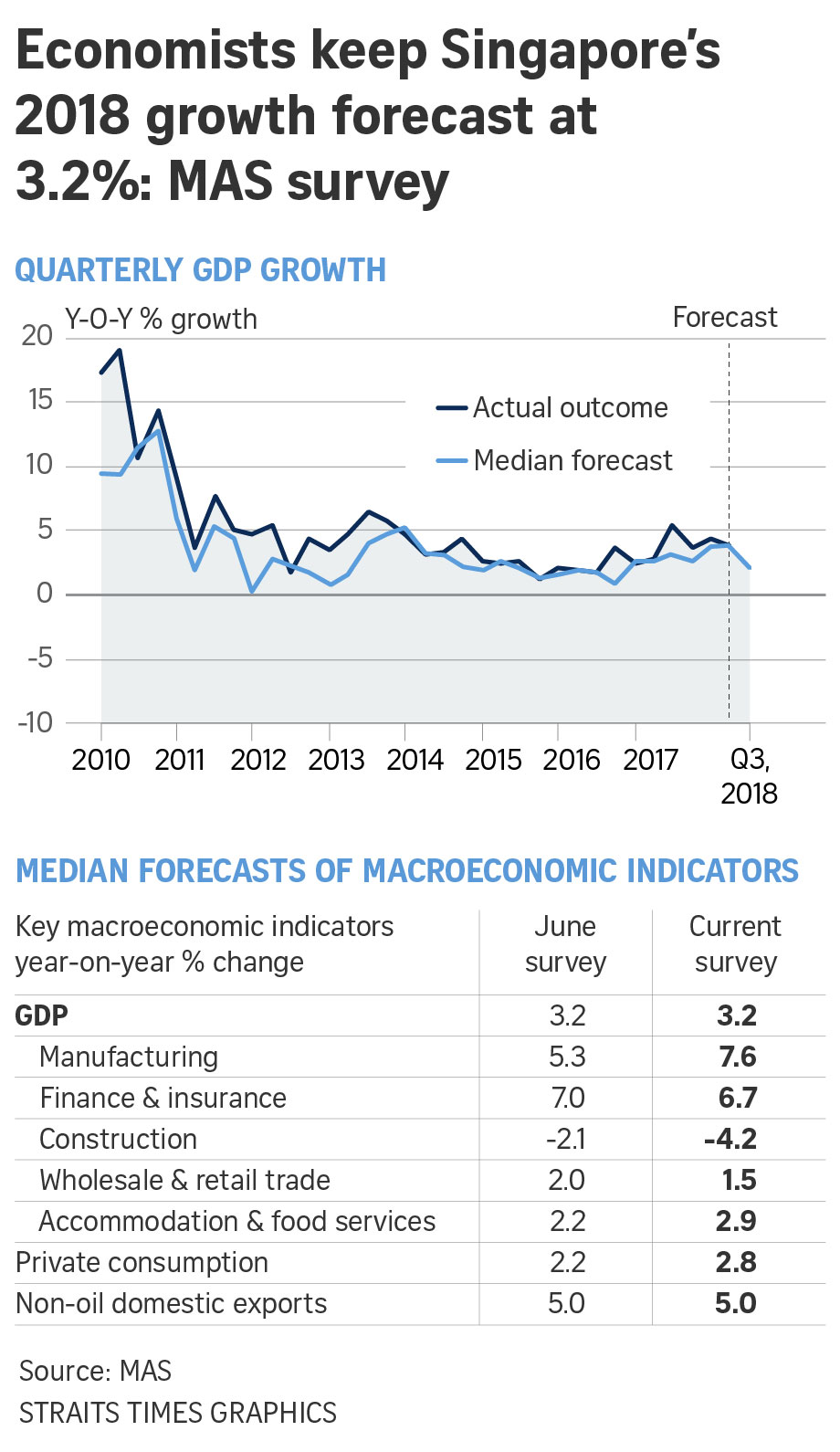 "Compared with the manufacturing sector, the construction sector in Singapore has under-performed in the first half of 2018 - both on public and private sector projects," said Mr Liew.

"The growth outlook of the construction sector could be further impacted with the delay in the construction of the high-speed rail between Singapore and Kuala Lumpur and the additional cooling measures in the private property market."

Still, the private economists remained bullish on non-oil domestic export (NODX) growth, sticking to their expectations of 5 per cent year-on-year growth. Government planners are eyeing a more conservative 2.5 per cent to 3.5 per cent increase in exports.

The outlook for private consumption is also rosy, with the economists anticipating 2.8 per cent growth, up from the 2.2 per cent they predicted in June.

Headline inflation for the year was pegged at 0.7 per cent, dipping from 0.8 per cent in the June survey, while the core inflation figure used by the MAS, which strips out housing and private road transport costs, is expected to edge up to 1.7 per cent, from 1.6 per cent before.

Unemployment is predicted to come in at 2.1 per cent at year-end, unchanged from the previous survey.

Wider dangers remain, as external factors continued to weigh on the economists' minds, with 47 per cent putting external growth on their list of potential upsides, up from 32 per cent in June, thanks to a stronger showing in the United States.

Meanwhile, 42 per cent fretted over weak external growth as a risk, compared with the 11 per cent who flagged it previously, on the back of the liquidity crunch in emerging markets.

Higher interest rates were flagged by 37 per cent of respondents, down from 47 per cent before.

"Capital flight remains a risk for Asia markets as the currencies are likely to weaken further in the second half of 2018, and continue to weaken if trade tensions continue to rise," said Mr Liew. "Economies with current account and fiscal deficits will be pressured to tighten their monetary policies."

China was also singled out for concern, with 37 per cent of the private economists flagging a slowdown in the world's second-largest economy as a downside risk, against 21 per cent earlier, amid a climate of credit tightening.

Trade protectionism was cited as a risk by 89 per cent of the economists, similar to the 84 per cent before, as Washington continues to escalate its rhetoric on trade and more tit-for-tat tariffs kick in. "Notably, 37 per cent of the respondents cited the dissipation of trade tensions as a possible upside, as it would remove uncertainty from the forecast horizon," said the MAS.

Still, he added: "Although we expect that the US may enact more tariffs on goods from China, our view is that both countries could open negotiations and avoid further escalations of bilateral tensions."

The view was shared by Asean economist Mohamed Faiz Nagutha from Merrill Lynch, who told BT that he expects "a solution at the end of the day, with the US and China reaching a deal" on trade.

The overnight property cooling measures that went into force in Singapore in July have dimmed economists' hopes for the domestic property market, with the proportion of respondents who named it an upside factor falling to 26 per cent, from 47 per cent in June.

Besides the impact on construction, the property cooling measures will likely hit the finance and insurance sector and business services as well, said Maybank Kim Eng's Ms Lee.

She pointed to how the private economists polled by the MAS have lowered their forecast for domestic banking unit (DBU) loan growth from 6.3 per cent in June to 5.1 per cent now: "We note that the median forecast for DBU loans for 2018 has been revised downwards to take into account the cooling measures, given that housing loans account for around 30 per cent of total DBU loans."

Singapore's GDP is projected to grow by 2.7 per cent in 2019, downgraded a tad from the June prediction of an expansion of 2.8 per cent. But Mr Nagutha said on the telephone that the difference is "very, very marginal", with the unemployment and private consumption forecasts still pointing to a supportive domestic environment for growth.

"Growth seems firm, from this perspective, and core inflation is up," said Mr Nagutha. These are factors that he thinks will keep the central bank on the path to monetary policy normalisation.

Ms Lee also said of the upcoming MAS Monetary Policy Statement on the Singdollar in October: "Given the downside risks to growth with the escalation of the US-China trade war and the new property measures, we expect the MAS to maintain the current slight appreciation stance in next month's meeting."

The latest MAS survey reflects the views of 23 analysts who monitor the Singapore economy. It was sent out on Aug 13, 2018.

France sees most new daily virus cases since May

Mnuchin accuses Democrats of playing politics on US aid deal

[SYDNEY] Australia's unemployment rate ticked up to a 22-year high of 7.5 per cent in July with a fresh wave of...

[BENGALURU] Australian shares edged lower on Thursday, pulled down by losses in heavyweight financial stocks, even...

[HONG KONG] Hong Kong stocks jumped almost one percent at the open on Thursday following a strong lead from Wall...