This year, Singapore is once more expected to attract between S$8 billion and S$10 billion in fixed-asset investments (FAI), though fewer jobs are expected to be created, the EDB said at its annual year-in-review briefing on Tuesday.

While the United States remained the largest source of investment, China's share rose sharply to 9.6 per cent, from 1.1 per cent in 2016.

Lab to drive innovations in building technology for post-Covid era

"That having been said, China has been playing an increasing role as a source of investment," he added.

But the EDB is no longer releasing forecasts for value-added per annum.

Explaining the move, Dr Beh said that figures for each project's expected value-added per annum are submitted by companies. Overall business sentiment might thus affect expectations, with lower estimates when conditions are bad and higher ones during optimistic times. 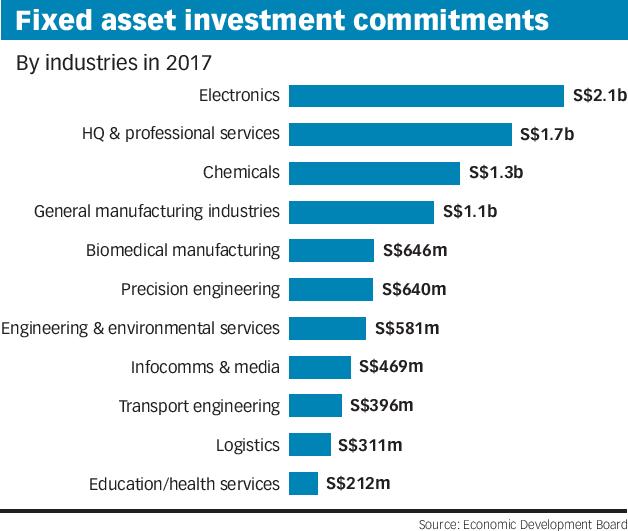 Amid a global recovery and steady growth in Asia, the EDB's investment outlook this year is "cautiously optimistic", with one major uncertainty being the impact of United States corporate tax reforms.

Mr Chng said the EDB is watching this closely: "Our preliminary assessment is that it could be harder to attract investments that are meant to supply into the US."

As Singapore's largest investor last year, the US accounted for 38.3 per cent of investments. This was followed by Europe (28.7 per cent), with China, Japan and homegrown firms taking a 9.6 per cent share each.

TBE per annum from investments this year is similarly forecast between S$5 billion and S$7 billion.

As productivity rises, the trend is for fewer jobs to be created, he told The Business Times. But he added: "Even as we create fewer jobs, more Singaporeans take up these jobs and they are better-quality jobs."

Mr Chng, who became EDB's managing director in October, said the EDB's priorities this year are to develop the workforce, transform industries through technology and facilitate innovation. Advanced manufacturing and digital capabilities will be its areas of focus.

THE Progress Singapore Party (PSP) will go further in the next election, said the party's secretary general Tan...

THE Workers' Party took three constituencies that secured it 10 seats in Parliament in this year's general election...

WITH 61.24 per cent of the valid vote and the historic loss of a second group representation constituency (GRC) to...

THE Workers’ Party (WP) has retained Aljunied GRC against the ruling People's Action Party (PAP) with 59.93 per cent...

THE People’s Action Party (PAP) has retained Nee Soon GRC with 61.9 per cent of the vote, in this year’s match...