THE en bloc phenomenon in 2017 yielded windfalls of billions not just to home owners but also to the taxman.

Bolstered by a 50 per cent jump in stamp duty collection and higher corporate tax collection on an improved economy, the Inland Revenue Authority of Singapore (IRAS) collected S$50.2 billion in tax revenue for the financial year ended Mar 31, 2018, over S$3 billion more than a year ago.

During the period, stamp duty jumped 49.6 per cent to S$4.9 billion as crowds thronged property launches and homeowners cashed out of collective sales. The party ended in July this year when the government tightened cooling measures to pre-empt potential runaway prices.

In its latest annual report released on Wednesday, IRAS said the 6.8 per cent increase in total tax revenue was mainly due to higher stamp duty collection as a result of a larger number of property transactions, and higher corporate income tax collection from improved corporate earnings as the economy grew a better-than-expected 3.6 per cent in 2017.

Property tax revenue was consistent with the previous financial year at S$4.4 billion.

The total amount of tax collected by IRAS represents 66.2 per cent of the government's operating revenue and 11.1 per cent of Singapore's gross domestic product.

Besides stamp duty, property tax and income tax, two other major sources of tax revenue are the goods and services tax (GST) and betting taxes. GST collection was S$11 billion in FY2017/18, similar to the previous year. Betting taxes, comprising betting duty, casino tax and private lotteries duty, came up to S$2.7 billion, unchanged from before.

"The cost of tax collection remained low at 0.84 cent for every dollar collected," said IRAS in a media statement.

The annual report also said that most taxpayers were voluntarily compliant. A total of 96.5 per cent of individual taxpayers filed their taxes on time, while 90.1 per cent made payments on time.

"Online tools such as a Virtual Assistant and an interactive start-up kit for new companies provide quick answers to taxpayers. We will continue to engage stakeholders to improve tax services." 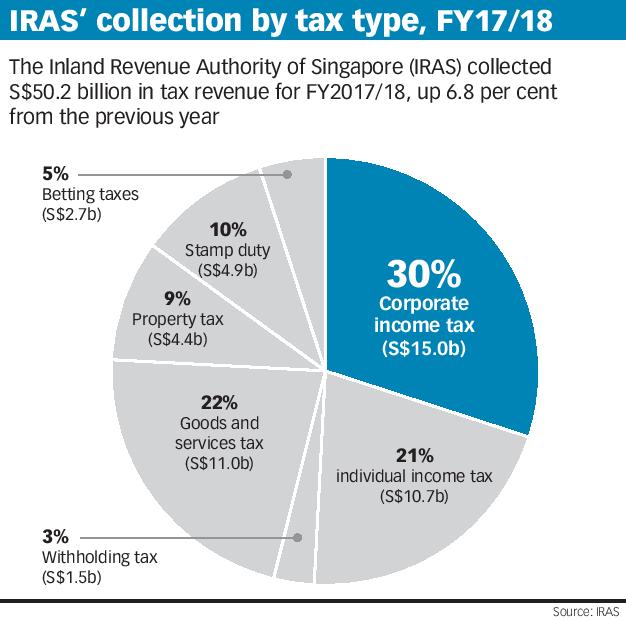 IRAS audited and investigated 10,726 taxpayers, recovering about S$384 million in taxes and penalties in FY2017/18. The previous corresponding figures were 10,626 taxpayers and recoveries totalling S$332 million.

During the financial year, 28 tax policies were reviewed. These include the deductibility of ABSD, interest and penalty payments as well as the timing of such deductions "to provide greater tax certainty to property developers".

"We are currently in the process of designing the GST measures in consultation with various stakeholders. 850 businesses and associations have so far been consulted," said Mr Ng.

[SEOUL] South Korean shares rose on Friday for a fourth straight session and were poised to post their 11th weekly...

[TOKYO] Organisers of the Tokyo Olympics said all event partners, including the Japanese government and the...

[SYDNEY] Google said on Friday it will disable its search function in Australia if the government proceeds with a...

SINGAPORE shares opened lower on Friday after ending the previous trading day past the 3,000-mark.

US dollar may continue fall, but impact on Singapore stocks unlikely to be major

GL has deeper value than just 70¢ a share: analysts