Vivien Shiaovshiao@sph.com.sg@VivienShiaoBT
Manufacturers had a stellar run in 2017 with output expanding at its fastest rate since 2010, even as December's lower-than-expected industrial production figures ended the year on a more somber note.
PHOTO: ST FILE

MANUFACTURERS had a stellar run in 2017 with output expanding at its fastest rate since 2010, even as December's lower-than-expected industrial production figures ended the year on a more somber note.

Singapore's factory output decreased 3.9 per cent in December 2017 compared to a year ago, missing economists' expectations of a 0.8 per cent expansion.

If the volatile biomedical manufacturing cluster was excluded, output would have grown 4.5 per cent.

But overall, Singapore's industrial production rose 10.1 per cent in 2017 compared to a year ago - a pace not seen since 2010 during the economic recovery post-recession.

Precision engineering was the strongest performer, with growth of 18.2 per cent year-on-year in December. Boosted by semiconductor demand, total output for the cluster grew 17.8 per cent last year compared to 2016.

Electronics - a key driver of economic growth in 2017 - grew at a more sedate pace of 4.2 per cent in December, supported by semiconductors and computer peripherals. For the whole of 2017, electronics grew 33.5 per cent compared to a year ago.

The chemicals cluster rose 14.4 per cent in December, with all segments recording output growth. It was up 6.2 per cent in 2017.

General manufacturing also went up 2.9 per cent in December, even though its overall output for 2017 still declined 1.6 per cent from a year ago.

Transport engineering fell 11.7 per cent, mostly due to the continued protraction of the marine & offshore engineering segment which was down 18.2 per cent. For the whole of 2017, the cluster's output was 6.9 per cent lower than 2016.

The highly volatile biomedical manufacturing plunged 34.7 per cent in December 2017 year-on-year. Year to date, it fell 9.3 per cent compared to the same period a year ago. 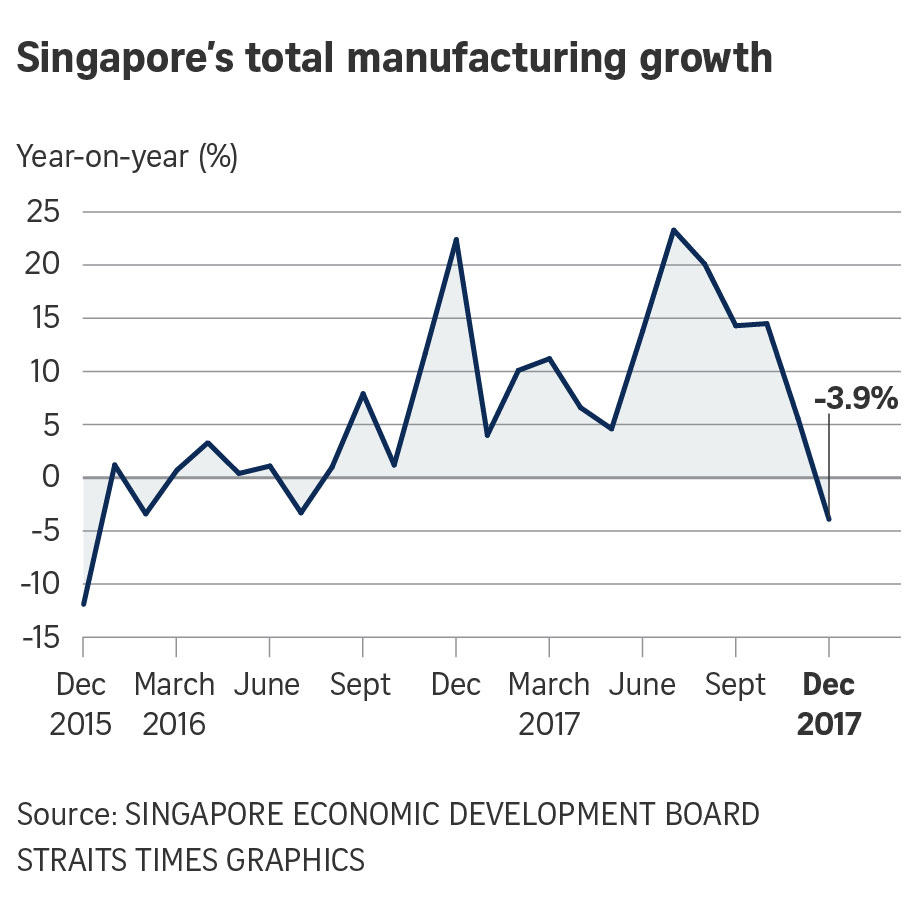