The US Federal Reserve, under intense pressure from Donald Trump to stimulate the economy, produced on Wednesday the first interest rate cut in more than a decade but struggled to justify the move or explain where it goes next.
PHOTO: REUTERS

[WASHINGTON] The US Federal Reserve, under intense pressure from Donald Trump to stimulate the economy, produced on Wednesday the first interest rate cut in more than a decade but struggled to justify the move or explain where it goes next.

The move to ease the cost of borrowing was well telegraphed as meant to "insure" against risks washing onto American shores from abroad but financial markets were whipsawed by confusion over whether another cut would be coming.

Fed Chair Jerome Powell told reporters he remains confident in the American economy and sees no sectors ready to go "bust" but decided on a 25 basis point cut in the rate to "insure against downside risks from weak global growth and trade policy uncertainty, to help offset the effects these factors are having on the economy."

The target for the federal funds rate is now 2.0-2.25 per cent and the central bank vowed to "act as appropriate to sustain the expansion."

It was a quick turnaround for the Fed, coming after four rate increases last year - the last one in December.

But Mr Powell tried to paint it as part of a continuum, with central bankers shifting their policy stance as economic data changed over the course of the year, especially trade tensions, which nearly "boiled over" last month but have now returned "to a simmer."

Wall Street plunged after Mr Powell said the Fed was not on the threshold of a "lengthy cutting cycle," with the Dow Jones Industrial Average at one point losing nearly 500 points. Mr Powell later clarified his comments and the Dow pared losses before the close.

"Let me be clear. I said it's not the beginning of a long series of rate cuts. I didn't say it's just one or anything like that," Mr Powell said.

It was another example of the Fed's communication woes as it is buffeted by conflicting economic signals and constant verbal attacks.

Nor is the Fed's policy-setting Federal Open Market Committee presenting a unified front: Esther George, head of the Kansas City Federal Reserve bank, and Eric Rosengren, of Boston, dissented in the 8-2 vote, because they "preferred at this meeting to maintain the target range for the federal funds rate at 2-1/4 to 2-1/2 per cent."

The Fed also gave Mr Trump something else he has demanded in his unrelenting attacks: an early end to a policy known as "quantitative tightening" or QT.

Beginning August 1, that means the Fed will stop reducing the huge amount of securities it built up during the global financial crisis.

Mr Trump, whose aggressive trade policies have thrown a wrench into the world economy and complicated the Fed's carefully laid plans, will certainly welcome the rate cut and likely call for more, as he has been doing for months.

Mr Powell again made an effort to dismiss fears that central bankers are swayed by outside pressure, saying policy is "going to depend on the evolving data and the evolving risk picture."

"We never take into account political considerations. There's no place in our discussions for that," he said.

Despite speculation that the rate cut in December was a mistake and a move to defy Mr Trump, Mr Powell insisted, "We don't conduct monetary policy in order to prove our independence. We conduct it in order to move as close as possible to our statutory goals. That's what we're always going to do."

While the committee continues to expect sustained economic expansion and gradually rising inflation to the Fed's two percent target, "uncertainties about this outlook remain."

The statement recognised that the "labour market remains strong and that economic activity has been rising at a moderate rate."

In fact, with unemployment at 3.7 per cent, near the lowest point in 50 years, and average job creation in the first half of this year at 172,000 a month - slower than the 223,000 in all of 2018, but still solid - some economists see little need for the Fed to provide additional stimulus. 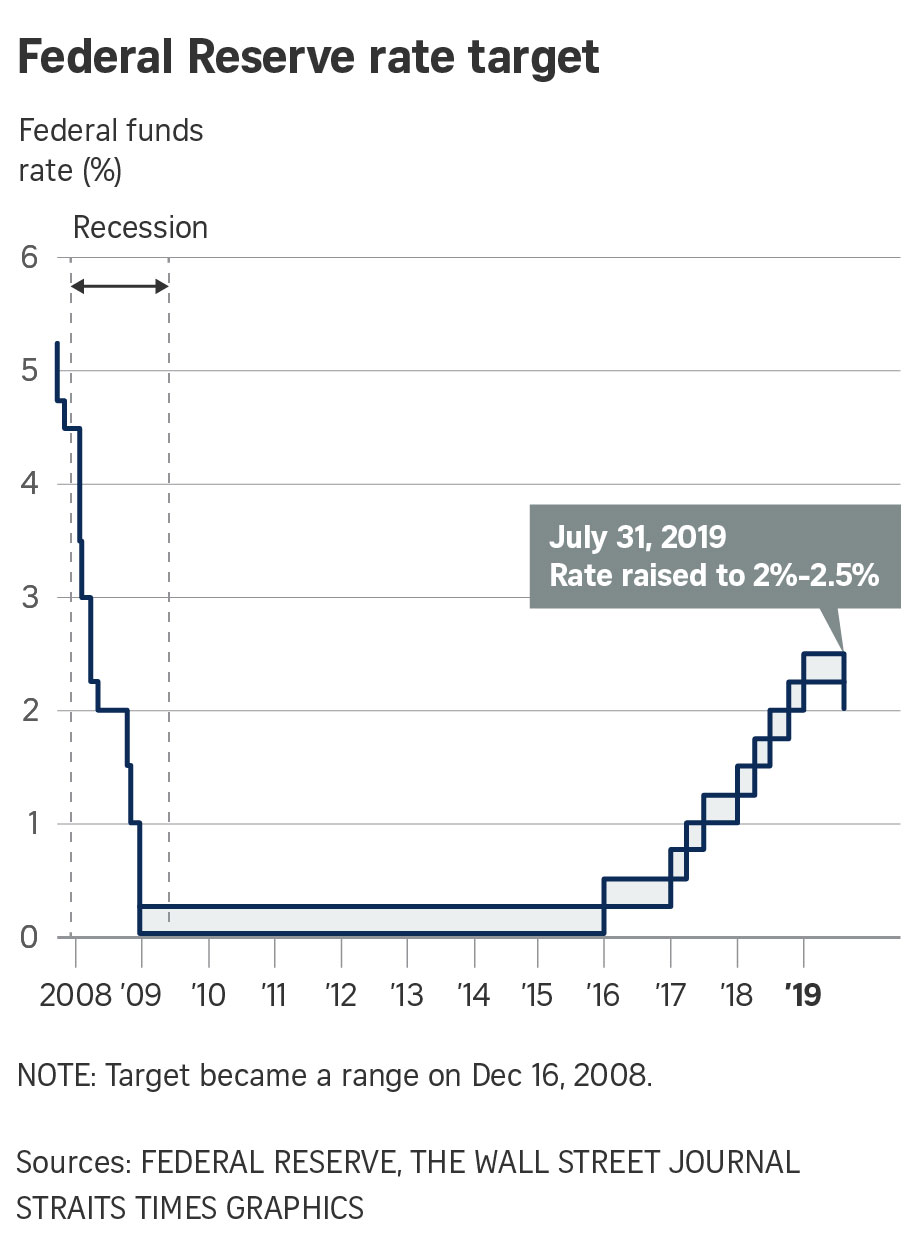 Others see concerns on the horizon: a slowdown in China's growth, the European Union on the brink of an unknown Brexit outcome, added to a drop off in US business investment and rising corporate debt levels. They say the Fed is right to retreat for now.

"The Fed is focused on inflation, and for good reason," Canaccord Genuity chief equity strategist Tony Dwyer said in an analysis. "The Fed has spent decades worried about higher inflation" but inflation is the "monster that hasn't come."

However, economist Joel Naroff disagreed, saying "the data don't point to a faltering economy only a moderating one."

"Where we go from here, though, is the real question and, given the rapidity with which Whiplash Jay changes direction, I have little idea what the next move will be," Mr Naroff said in a research note.

FACTORIES are back in business.

FOREIGN direct investment (FDI) flows into Singapore fell by 37 per cent to US$58 billion last year, noted an...

Nepal's star K2 climber does it his way

[LONDON] European stock markets steadied at the start of trading on Tuesday after sliding the previous session in...