SINGAPORE attracted S$15.2 billion in fixed asset investments (FAI) in 2019, far exceeding the forecast of S$8 billion to S$10 billion for the year, the Singapore Economic Development Board (EDB) said at its year-in-review briefing on Thursday.

He noted that large investments came from chemical and semiconductor firms that are "preparing themselves for the eventual upturn" and have had long-term engagement with Singapore. Chemicals and electronics were the top two sources of investment commitments in 2019, at S$4.9 billion and S$4.6 billion secured respectively.

Also contributing to 2019's good showing were the continued establishment of regional headquarters, and the building up of digital capabilities by both digital firms and those in traditional industries.

Business expenditure per annum from the projects secured in 2019 came up to S$9 billion. When fully implemented, the projects will create 32,814 jobs in the coming years, and are expected to contribute S$29.4 billion in value-added per year.

Unlike previous years, the EDB gave no forecast for 2020. "We are trying to shift away from a year-to-year forecast," said EDB managing director Chng Kai Fong, adding that such an approach was less meaningful in relation to how firms make decisions.

After all, that S$8 billion to S$10 billion forecast has been the same each year since 2016. Still, Mr Chng said that EDB has "some foresight of the pipeline" for 2020 and expects to come in above these medium to long-term targets, particularly for FAI.

Asked by the media if unrest in Hong Kong could have contributed to 2019's spike in investment commitments, Dr Beh replied with a firm "no". In recent years, companies in Hong Kong have been more focused on China and would be likelier to move there instead of to Singapore, he said. Besides, Hong Kong was never a competitor for the big investments in chemicals and semiconductors that contributed heavily to FAI.

EDB will continue to focus on three areas, said Mr Chng: strengthening Singapore as a platform for tapping opportunities in South-east Asia; improving Singapore's role as a hub for developing digital products and solutions; and partnering firms in their innovation journey.

Of the jobs created by the 2019 investment commitments, almost half are expected to be digital roles such as data engineers, software engineers and digital product managers. Another 30 per cent are in production.

By sector, the top sources of jobs are the infocommunications and media sector, with 8,527 jobs expected to be created, and engineering and environmental services, with an expected 6,263 jobs. 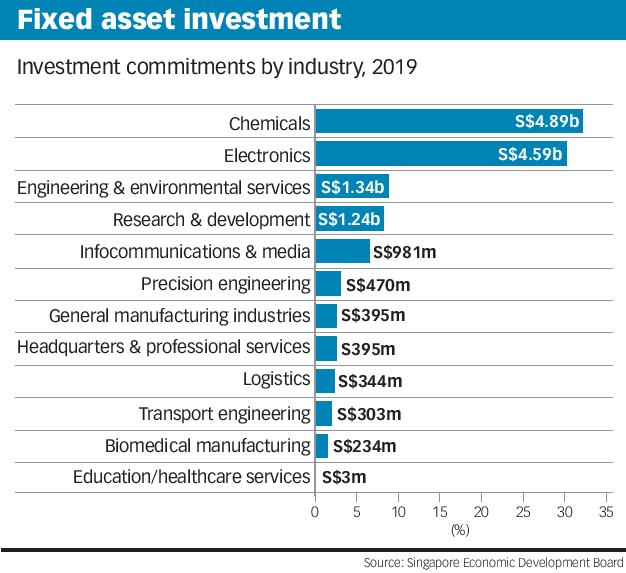 Asked if the local workforce would be able to fill these new digital roles in particular, Dr Beh and Mr Chng replied that not all these roles would require computer science degrees or even necessarily coding skills.

The quality of Singapore's workforce is actually a big draw for firms, both in terms of the local workforce and the ability to attract talents that might be needed, said Dr Beh.

[LONDON] JPMorgan Chase & Co is planning to enter the UK consumer-banking market in the next few months,...

China says has allocated 99.5b yuan for curbing coronavirus outbreak

[BEIJING] China has allocated 99.5 billion yuan (S$19.83 billion) in funds for curbing the coronavirus outbreak that...