SINGAPORE factories face an uphill slog, as a much-longed-for industry turnaround in the second half of the year could fail to materialise.

Manufacturing sentiment has turned negative for the first time in almost three years, with economists warning that the rot may spread beyond the cooling electronics cluster.

Singapore's headline Purchasing Managers' Index (PMI), an early measure of factory activity, fell below 50 in May - which indicates contraction - after notching 32 months of growth.

It dipped to 49.9, down by 0.4 point on the month before, said the Singapore Institute of Purchasing and Materials Management on Monday, amid slower growth in areas such as new orders, new exports and factory output.

I4.0 solutions key for businesses to stay ahead amid global uncertainty

Meanwhile, the linchpin electronics segment declined for the seventh straight month, with the PMI down by 0.1 point to 49.4, with more softness in new orders and new exports. Electronics imports and input prices saw growth, but other areas - like factory output, inventory, finished goods and order backlog - were in the red.

As key trade talks fell through, the United States hiked tariffs on US$200 billion of Chinese goods in May - setting the stage for China's tit-for-tat duties. The US has also moved to blacklist key Chinese technology companies from access to American parts.

Last month's ramp-up in trade tensions thew a spanner in the works of the expected electronics pick-up, amid hopes that a cyclical downturn in technology had bottomed out. 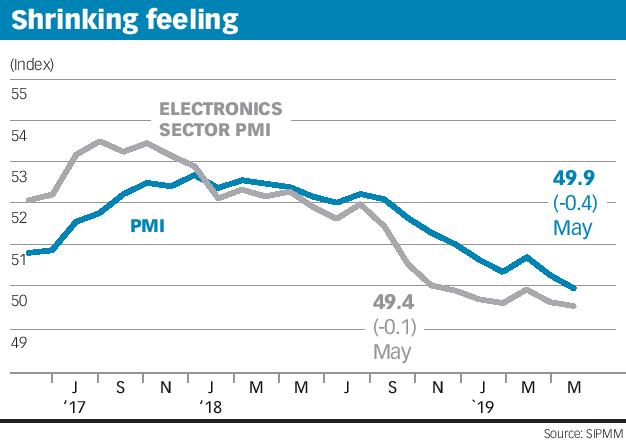 Vishnu Varathan, head of economics and strategy at Mizuho Bank, told The Business Times that the earlier weakness in Singapore electronics "was a correction" from an "exceptionally strong" base effect in 2017 - "but now it's extending beyond that".

Citing factors like a slump in DRAM chip prices, Jonathan Koh, a Standard Chartered regional economist, said: "It has been the electronics and, consequently, precision engineering industry clusters that have weighed on manufacturing sector growth."

But economists have now warned that the losses could spread beyond electronics, with Barclays analysts saying in a report on Monday that renewed trade tensions and bad news from China "will likely force many market participants and policymakers to re-examine their assumption of a (second-half) recovery".

"Uncertainty around other sectors will also be building up. This also affects, for example, the confidence of businesses to invest," said Mr Varathan, flagging "downstream effects" of capital expenditure cutbacks.

Major exporters such as Japan, South Korea and Taiwan also posted negative factory activity in manufacturing PMI data for May.

Meanwhile, Chinese factories still notched expansion in May, according to the private Caixin/Markit PMI survey, though the front-loading of US-destined exports was floated as a possible driver. The Caixin PMI polls smaller, more export-oriented companies - in contrast with China's official PMI, which shrank by 0.7 point to 49.4.

ANZ's Mr Mathur , referring to the Singapore forecast, said that "it is always hard to predict a PMI, but it is likely to stay below 50 for some time".

Still, Mr Varathan told BT: "These things tend to be a bit 'noisy', so it may not be a sustained sub-50 trend."

Goldman hit with record US bribery fine over 1MDB scandal

[NEW YORK] Goldman Sachs will pay a record foreign bribery penalty in the US and will enter a guilty plea for the...

US existing home sales blow past expectations in September

[WASHINGTON] US home sales surged to a more than 14-1/2-year high in September, boosted by historically low mortgage...

[TOKYO] Japan's Mitsubishi Heavy Industries plans to freeze development of its Spacejet regional jet as the...