Nisha Ramchandaninishar@sph.com.sg@Nisha_BT
The Singapore Tourism Board (STB) is projecting modest growth for the local tourism industry this year, after last year's better-than-expected performance delivered a record number of visitors which hit a new high in spend.
ST PHOTO

THE Singapore Tourism Board (STB) is projecting modest growth for the local tourism industry this year, after last year's better-than-expected performance delivered a record number of visitors which hit a new high in spend.

The STB, expecting Singapore to ride on the Asia-Pacific's burgeoning demand for travel, has forecast arrivals of 16.4 million to 16.7 million for this year; tourism spend is expected to come in at between S$25.1 billion and S$25.8 billion.

But headwinds are expected amid the intensifying regional competition for the tourism dollar.

STB's chief executive Lionel Yeo said: "Looking ahead to 2017, we continue to see good growth opportunities for our region, the Asia-Pacific. The outlook for travel and tourism continues to be a positive one, but we're going to temper our expectations because we're fully cognisant of the fact that there are political and economic uncertainties which may have an impact on outbound travel."

Singapore had fourth record year for tourism in 2019

Last year, arrivals grew 7.7 per cent to 16.4 million, bolstered by top visitor source markets such as China and Indonesia; tourism receipts leapt 13.9 per cent to S$24.8 billion, bankrolled by higher-spending visitors. These soundly pipped the STB's initial forecasts of between 15.2 million and 15.7 million visitors and S$22 billion to S$22.4 billion in spend.

The figures for last year rebounded from those of 2015, when tourism receipts slumped to about S$22 billion.

Efforts by STB to boost marketing efforts in China, Indonesia and India, as well as the launch of new flights to Tier 2 cities pushed up arrivals from these three countries by 36 per cent, six per cent and eight per cent respectively.

While China was the biggest source of arrivals for the first 11 months of last year, a solid surge in volumes from Indonesia in December kept the South-east Asian nation as the top source market for Singapore, with 2.89 million visitors in total.

China was close behind with 2.86 million visitors; its nationals were, however, the biggest source of tourism spend. Malaysia rounded off the top three with 1.15 million visitors. 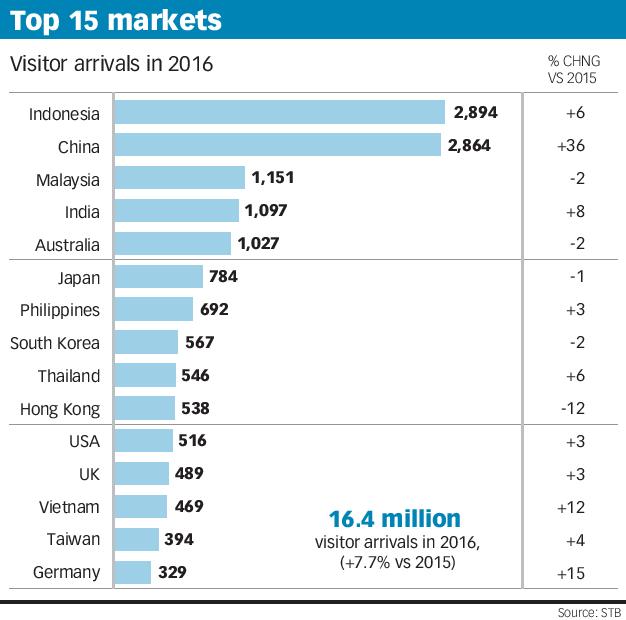 Other markets in the top 15 which recorded double-digit growth were Vietnam (12 per cent) and Germany (15 per cent).

The tourism agency has been leveraging on digital platforms such as Tuniu.com, Ctrip and Tencent, and working with online travel agents in China; this has raised awareness of Singapore and sparked travel demand from smaller cities.

For instance, 99,200 bookings made on Tuniu.com were for mono-Singapore tour packages, up 52 per cent year on year.

STB is also launching digital-marketing programmes in markets such as Korea.

In the MICE (meetings, incentives, conventions and exhibitions) segment, Singapore played host in more than 410 business events last year, 15 per cent more year on year. These generated some S$611 million in tourism receipts (up 28 per cent from 2015) and 343,000 visitor arrivals (+20 per cent).

Noting that Singapore has been successfully targeting the right type of traveller, CBRE's Mr Sim commented that the move by Singapore's tourist attractions to roll out more experiential offerings is keeping tourists coming back.

On the hotel front, total room revenue edged up some 2 per cent year on year to S$3.24 billion.

However, increased supply in the market prompted revenue per available room (RevPAR) to slide nearly five per cent to S$199, in line with a four per cent drop in average room rate to S$237.

The industry-wide average occupancy rate more or less held steady, dipping one percentage point to 84 per cent. As at year-end, Singapore had 413 hotels with 63,850 rooms.

Downside risks to RevPAR could persist this year, as more supply comes onstream and corporate budgets are trimmed in the face of the softer economy.

Citing industry data, CDL Hospitality Trusts has estimated that the hotel industry will grow by 3,767 hotel rooms, or 5.9 per cent, this year. However, the injection of supply is expected to slow in 2018.

In the cruise segment, cruise passenger throughput picked up by 16 per cent year on year to 1.2 million, thanks in part to 7 per cent more ship calls, bringing the number to 411; the figure included 10 maiden cruise ship calls.

Cruising appeared to be the most popular with tourists from India, who accounted for 100,000 cruise passengers, up 29 per cent from the year before.

STB's Mr Yeo said the refreshing of Orchard Road could include changes to the streetscape to make it more visitor-friendly, as well as more events and programmes to add vibrancy. This follows the recommendation by the Committee on the Future Economy (CFE), as the shopping belt faces competition from e-commerce and suburban malls.

EDBI and SEEDS Capital to dole out S$285m startup support

THE S$285 million Special Situation Fund for Startups (SSFS) will be administered by EDBI, the corporate investment...