Mindy Tantanmindy@sph.com.sg@MindyTanBT
South-east Asia's Internet economy is expected to exceed US$240 billion by 2025, beating the previous estimate of US$200 billion put up just a year ago, as lower costs enable more consumers to go online using their mobile phones.
PHOTO: LIANHE ZAOBAO

SOUTH-EAST Asia's Internet economy is expected to exceed US$240 billion by 2025, beating the previous estimate of US$200 billion put up just a year ago, as lower costs enable more consumers to go online using their mobile phones.

This year, the region's Internet economy is expected to hit US$72 billion in gross merchandise value (GMV) - which measures the total value of merchandise sold - representing growth of 37 per cent over a year ago according to a new study released by Google and Temasek on Monday.

This is an acceleration beyond the 32 per cent compounded annual growth rate (CAGR) recorded between 2015 and 2018.

In Singapore, the Internet economy formed 3.2 per cent of GDP, second only to Vietnam in South-east Asia.

Asia-Pacific's office market on the mend

The impressive growth rate is in large part due to the increasing affordability of mobile Internet. The cost of one gigabyte of data has been more than halved relative to people's income over the last four years, according to Rajan Anandan, vice-president for India and South-east Asia at Google.

Of the six countries, Indonesia is the fastest-growing. Supported by the largest Internet user base (150 million users in 2018), it has the largest (US$27 billion) and fastest-growing Internet economy in the region at 49 per cent CAGR from 2015 to 2018.

The three largest players in the region - Lazada, Shopee and Tokopedia - are estimated to have grown more than seven times collectively since 2015 and are estimated to account for 70 per cent of the market. 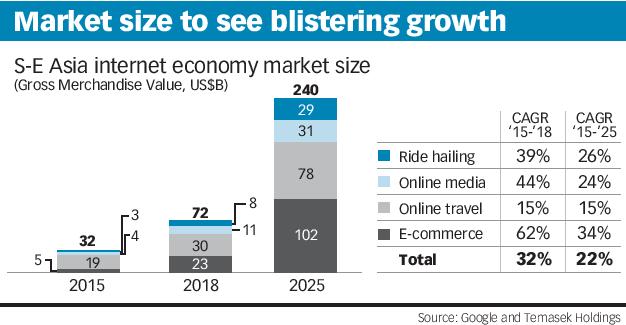 This puts total funds received by Internet economy companies in South-east Asia at US$24 billion in less than four years.

Also worth noting is that companies valued between US$10 million and US$100 million raised a record US$1.4 billion in the first half of 2018. Fundraising for this sector of the ecosystem was stagnant over the past two years, in 2016 it pulled in US$0.8 billion and in 2017 US$1.0 billion.

"This is very interesting and it has happened because there are a number of new players that are being attracted to the region," said Rohit Sipahimalani, joint head, investment group, at Temasek, citing VCs like Seqoia and B Capital.

"In general, I feel that it's a recent trend in terms of seeing that acceleration (in funds raised) but one we think should continue because of that presence - people are setting up here to look for opportunities."

Meanwhile, the ride-hailing sector - including, for the first time, online food delivery - is estimated to reach US$7.7 billion GMV in 2018. The report projects that this sector will reach almost US$30 billion by 2025, of which more than US$20 billion will come from transport and over US$8 billion from online food delivery.

Separately, online media, which includes online advertising, gaming, subscription music and video on demand, is projected to exceed US$11 billion this year. It is projected to reach almost US$32 billion by 2025.

EU-US alliance 'on life support' after four years of Trump

[FRANKFURT AM MAIN] Back in 2016, German Chancellor Angela Merkel greeted Donald Trump's victory with an...

[PANAMA CITY] Panama is the latest country to offer travellers a Covid-19 test when they arrive at its main airport...

Gold steadies at US$1,900 as US stimulus hopes support

[BENGALURU] A firmer US dollar held back gold near the US$1,900 per ounce psychological level on Monday even as US...