A study by the Institute of Policy Studies (IPS), titled "Improving Retirement Adequacy by Restoring Older Worker CPF Rates", says a full restoration of the rates would also mean that 21,790 more workers (10 per cent of each five-year cohort) would be able to hit their full retirement sum.

The study favours a raising of the CPF contribution rates because it will encourage older workers to stay employed in a tight labour situation; it will also improve the adequacy of their retirement income during their autumn years.

The release of the study on Wednesday comes ahead of the government's expected changes to CPF contribution rates following a review to end by late this year.

The authors of the study are Damien Huang and Christopher Gee. 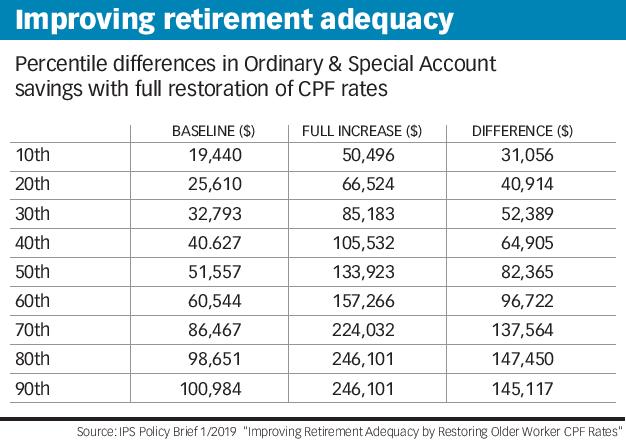 CPF contribution rates for workers above 55 years old were first cut in 1988 and again in 1993 and 1999. The combined employer-employee contribution rate of a 64-year-old today is 10.5 percentage points lower than for a 54-year-old worker.

With CPF money being used also for housing and medical needs, the study says that what is left for retirement is relatively low for the current cohorts of older workers.

CPF members are required to set aside a "minimum sum" in CPF for retirement needs at age 55. This sum is adjusted annually for inflation.

In 2016, only 53 per cent met the minimum sum required - despite a high employer-employee contribution rate of 37 per cent being in force before workers turn 55.

The IPS study quantifies the effect of full and partial restoration of CPF rates on the retirement income adequacy for workers aged 55-64 years; it also tracks the effects on employers' wage bills and the additional interest the CPF Board has to pay.

Younger workers will save more while they work and, with longer housing loan tenures, an increase in CPF contribution rates means that homeowners still paying mortgages do not have to pay additional cash out-of-pocket before they are 55.

The study says the CPF Board will pay S$54 million more in CPF interest annually with a full restoration in CPF contribution rates. A one percentage point increase in the Ordinary and Special Account will raise annual interest payments by S$9 million.

The study says: "For employers, the impact is smaller than for workers, at S$57 and S$130 for groups aged 55-59 and 60-64 respectively at the 20th percentile. The smaller impact is due to the smaller initial decrease in contribution rates for employers in transiting workers from 54 to 55."

The aggregate impact on employer wage bills is likely to be around S$800 million in the first year for both age groups. The study suggests that the government soften the impact through "transitional" subsidies or phasing in the restoration of the contribution rate.

"The restoration of these rates reflects fair hiring costs to employers and are a one-time increase that can be mitigated by a phase-out subsidy," it concludes. "This solution should also be preferable to paying higher general taxes for basic pension payouts to the portion of the population who are unable to meet the CPF savings thresholds."

[BENGALURU] 3M Co expects to ramp up US monthly production of N95 respirator masks to 50 million in June, the...

[FORT LAUDERDALE] US authorities were finalising a plan on Tuesday to allow a coronavirus-stricken cruise ship, the...

[NEW YORK] Emergency field hospitals have begun going up in New York's Central Park and at the home of the US Open,...

[LONDON] Britain reported a record daily coronavirus toll of 381 on Tuesday, more than double the number of...