Job market in Q1 stays weak but with pockets of optimism

Net job losses and layoffs not as big as indicated earlier; analysts note that services job creation has been adjusted upwards by 1,200 in latest report
Chuang Peck Mingpeckming@sph.com.sg@PeckmingBT
The job market remained weak in the first quarter of the year, but not as weak as earlier figures suggested.
ST PHOTO: LIM YAOHUI

THE job market remained weak in the first quarter of the year, but not as weak as earlier figures suggested.

The Ministry of Manpower's final - and more detailed - Labour Market Report 1Q 2017 released on Tuesday even revealed some improvements.

"Although still a weak picture for the job market overall, relative to the gloomy preliminary release in April, (Tuesday's report) provides a less negative signal and also coincides with tentative improvements in domestic demand," said Kit Wei Zheng, an economist at Citigroup.

Recruitment firm Adecco's country manager in Singapore, Philippe Martinez, said: "There are a few positive signs, with redundancies decreasing and the manufacturing sector picking up in the last few months."

Job vacancies to fall further, so focus will be on saving jobs, reskilling workers: Josephine Teo

Citing the upward revision in the GDP growth figure, he added that Adecco has been receiving "steady workforce requests from clients".

According to the ministry's report, the seasonally-adjusted ratio of job openings to jobless persons - a key barometer of labour market demand-supply balance monitored by authorities - inched up from 0.77 in December 2016 to 0.81 in March 2017 - the first rise after seven straight quarters of decline. This was due to an increase in vacancies among enterprises with fewer than 25 workers on their payroll.

The increase more than made up for the dip at the same time in companies with 25 or more employees, according to the report.

Net job losses and layoffs in the first quarter were not as big as indicated in the ministry's earlier preliminary report. Mr Kit noted that services job creation was adjusted upwards by 1,200 in the final report.

The latest drop in jobs was a reversal from the modest growth of 2,300 in the last quarter of 2016, the ministry's report said. The contraction was mainly due to a drop of 4,300 in manufacturing and 12,500 in construction, affecting mostly Worker Permit Holders, while the services sector saw an employment increase of 9,900. 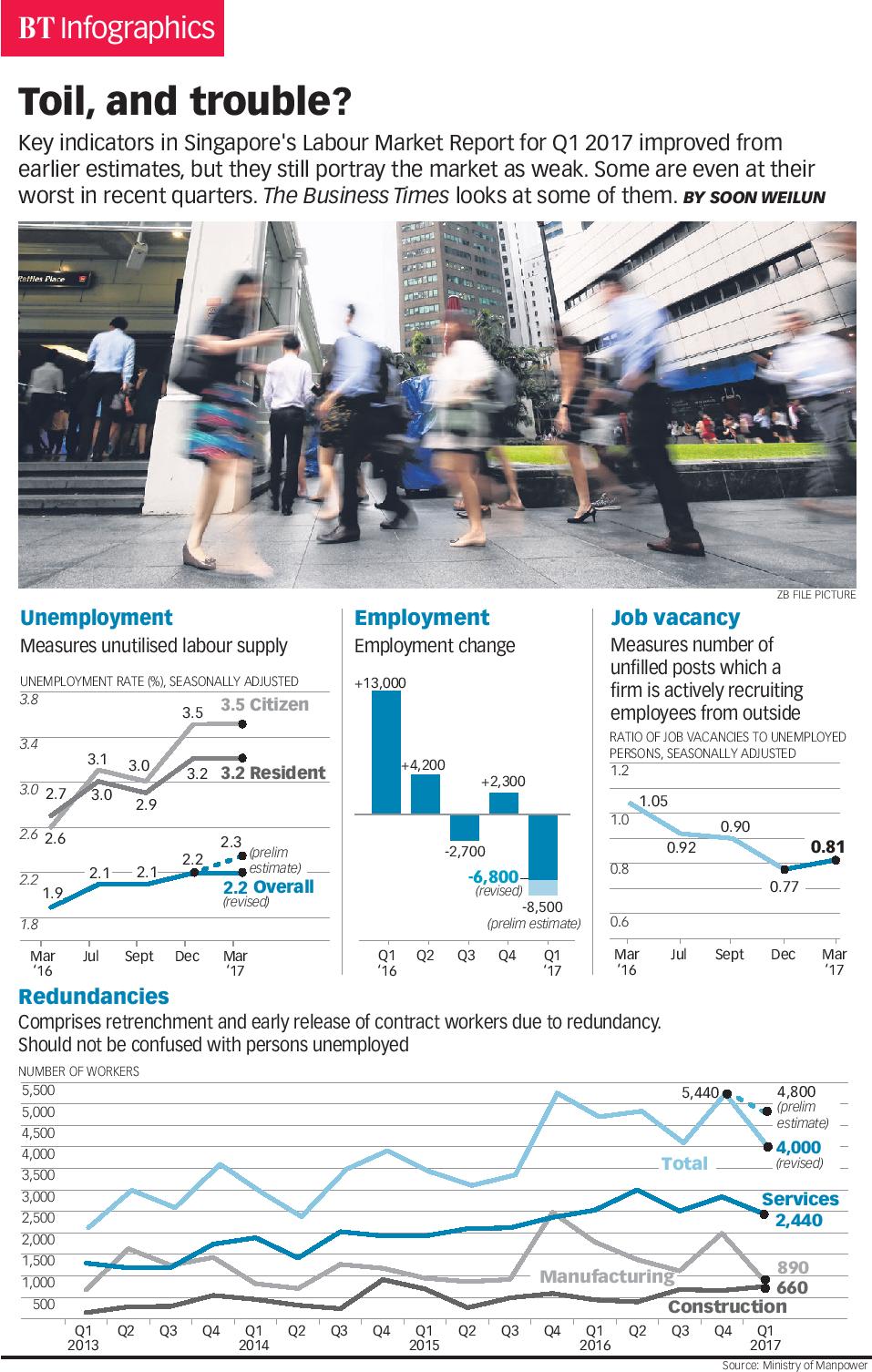 The report added that the decline in construction reflected the weaknesses in private-sector construction activity. Manufacturing was weighed down by the marine and offshore engineering segment.

The final number for redundancy in the third quarter was 4,000 workers, lower than the number in the preliminary report which had it as 4,800 workers.

The overall unemployment rate in March, though higher than the 2.1 per cent a year ago, stayed unchanged from December 2016 at 2.2 per cent. Preliminary figures had put March's jobless rate at 2.3 per cent.

Still, Mr Kit said the overall picture remained that of significant labour market slack. "The number of workers on short week or temporary layoffs rose to the highest since the second quarter of 2013, recruitment and resignation rates continued to fall to levels not seen since the first quarter of 2009, wage growth slowed to 1.9 per cent, slowest since the fourth quarter of 2014."

The ministry's report came a day after recruitment firm ManpowerGroup (see amendment note) issued its quarterly employment survey results, which showed that the net employment outlook is the least upbeat reported by Singapore employers since 2009.

It also came almost a month after the Monetary Authority of Singapore said the labour market would continue to be soft - fitting, according to Mr Kit, the picture painted by the Ministry of Manpower's report on Tuesday, despite some bright spots.

The board of tourism player Straco Corporation on Sunday said that its attraction, Shanghai Ocean Aquarium, will...

Property developer First Sponsor Group on Saturday said it has obtained permission from the Singapore Exchange...