Less than half in survey confident Singapore will be cashless soon

Barriers to mobile payment include limited number of merchants, convenience of cash, need for one-time passwords
Claudia Chongchongkmc@sph.com.sg@ClaudiaChongBT
The majority of consumers in Singapore would like for the country to become a cashless society – but when it comes to actually seeing that vision materialise in the near future, consumer confidence remains low.
BT PHOTO: KELVIN CHNG

Use of payment methods in the past three months

THE majority of consumers in Singapore would like for the country to become a cashless society – but when it comes to actually seeing that vision materialise in the near future, consumer confidence remains low.

A study by UnionPay International and Nielsen has revealed that although three in five respondents hope for Singapore to go cashless, less than half - or 42 per cent - are confident that a cashless society will emerge in the near future.

Respondents estimated that it would take Singapore around 12 years on average to go completely cashless.

To top it off, only two in five Singaporeans are confident of living in a cashless society; among the Baby Boomers aged 51 to 65, the confidence level drops further to 31 per cent.

Nonetheless, a majority saw value in driving mobile payment adoption within their social circles. Out of 400 respondents surveyed, 66 per cent said that they are likely to recommend mobile payments to their family, friends and colleagues, while 64 per cent would teach others to use mobile payments if they were resistant to it.

The top barriers to mobile payment adoption were the limited number of merchants, cash being convenient for low value purchases, and the need for one-time passwords (OTP).

The top drivers for mobile payment adoption were the speed of transactions, ease of use, and the ability to go cardless or cashless.

Vincent Ling, deputy general manager of UnionPay International South East Asia, said: "The journey towards a cashless society is not going to happen overnight. As we continue to accelerate towards this vision, mobile payments will play an increasingly important role in replacing cash, especially for lower value purchases.

"Hence, it is important that our society collectively takes steps to help others adopt mobile payments, to foster a more inclusive Smart Nation." 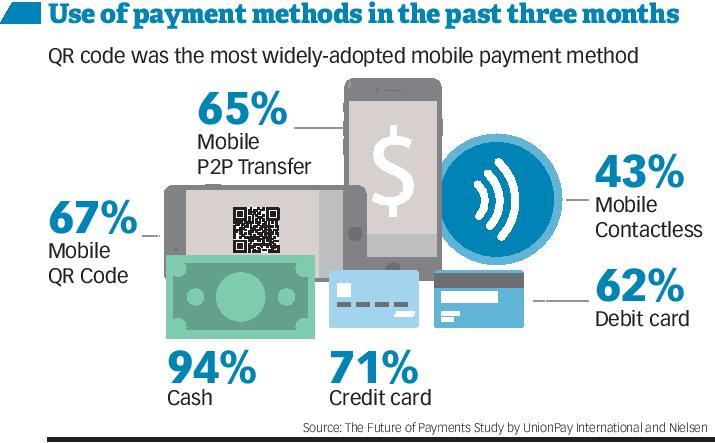 When the usage of various payment modes were compared, cash once again took the crown, with 94 per cent of those surveyed indicating that they have used cash during the past three months.

The good news is, mobile payment methods had their fair share of usage as well. QR code has become the most widely-adopted mobile payment method - 67 per cent of Singaporeans had used it in the past three months. This was followed by mobile peer-to-peer transfer at 65 per cent, and mobile contactless payment at 43 per cent.

"With the increasing pervasiveness of QR code for payments across a variety of mobile payment platforms, along with its increased acceptance at merchants across the island, we believe that the adoption rate and frequency of usage for QR code will continue to rise," said Mr Ling.

Respondents who have not tried using QR code for payment said that top barriers include the belief that other payment methods are hassle-free, the payment method not being widely accepted, and unfamiliarity with using it.