July inflation touches decade low and is likely to remain tepid - even negative - until at least end of year
Annabeth Leowleowhma@sph.com.sg@AnnabethLeowBT
Singapore's central bank is still expected to leave its currency policy settings untouched at the next review in October, market watchers said on Monday - despite core inflation touching a decade low in July.
PHOTO: ST FILE

SINGAPORE'S central bank is still expected to leave its currency policy settings untouched at the next review in October, market watchers said on Monday - despite core inflation touching a decade low in July.

All-items and core inflation, which excludes accommodation and private road transport costs, came in at -0.4 per cent in July - extending months-long stints in negative territory.

But even as deflation is expected to bottom out this quarter, there are rising risks to the base-case scenario of a zero-slope currency policy, if external demand and the domestic labour market continue to languish.

Even with the latest drop, the Monetary Authority of Singapore (MAS) will likely maintain the slope, width and centre of the policy band for the Singapore dollar nominal effective exchange rate (S$NEER), Terence Wu, currency strategist at OCBC Bank, told The Business Times.

"Even though the domestic economy is expected to be subdued for the rest of 2020, we expect fiscal policy (to) still be the heavy-lifter if further economic stimulus is required.

"Thus, the bar is high for a shift in the $NEER policy, and the current situation does not seem sufficient to warrant another adjustment," he said.

Yet analysts also said that the central bank may yet lower the mid-point of the policy band in which the Singdollar can float - especially "should macroeconomic conditions deteriorate beyond the official GDP forecast range", as United Overseas Bank economist Barnabas Gan put it.

That's as the Ministry of Trade and Industry (MTI) noted weakening external demand in its gross domestic product briefing this month. As it involves currency rates, foreign exchange policy can be a more relevant tool to address external demand. 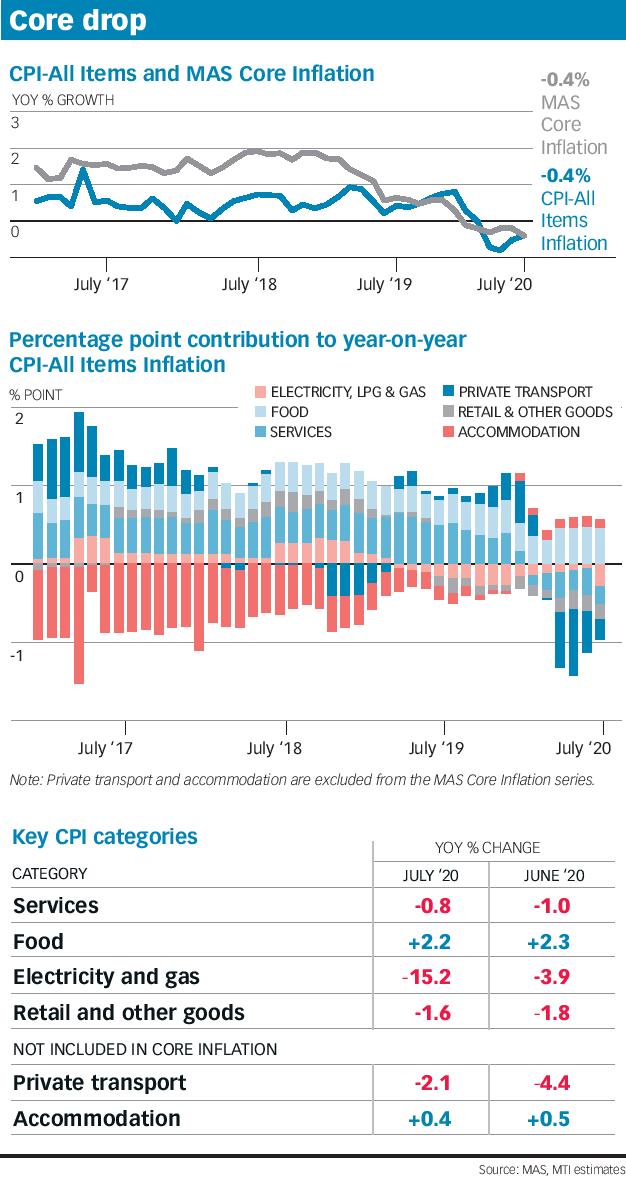 Fiscal support is also likely to trail off as a new term of government seeks to balance its budget, Citi analysts Kit Wei Zheng and Ang Kai Wei said in a note, calling it "premature to completely rule out another easing".

Even if the MAS holds back on the easing in October, a downward re-centring next April could still take place, if labour market slack lingers and core inflation stays below its historical average, the Citi team added.

In the meantime, inflation is expected to bottom out this quarter, but will likely remain tepid - even negative - until at least the end of the year.

The protracted slump in oil prices was partly to blame for July's weakness, as core inflation was dragged down by a cut in household electricity tariffs - sharply lowering electricity and gas costs year on year.

Although pandemic-related supply-chain disruptions could prop up food import costs, the MAS and MTI noted that international food commodity prices have declined.

Mr Gan from UOB suggested that the pace of deflation could taper off "should Singapore's tourism industry see some pick-up" from loosening restrictions on in-bound travel from Brunei, New Zealand, Malaysia and mainland China.

But, taking the opposite tack, Maybank Kim Eng economists Chua Hak Bin and Lee Ju Ye observed that the prices of items such as airfares and holiday expenses have had to be imputed, as the Covid-19 outbreak prevented the collection of such figures.

"As the prices of these components gradually become available in the coming months. . . rates may post a larger-than-average drop as flights and tourist arrivals remain depressed versus pre-pandemic levels," they said.

Still, the MAS and MTI kept their full-year inflation forecasts at between -1 per cent and zero, for both headline and core inflation.

THE Monetary Authority of Singapore (MAS) on Monday announced the launch of a S$35 million Productivity Solutions...

[SYDNEY] Australia's New South Wales (NSW) state said on Monday it would shift toward renewable energy from coal and...

[SEOUL] Samsung Electronics may launch its flagship Galaxy S smartphones more than a month earlier than expected in...

Taiwan says not invited to WHO meeting after China's 'obstruction'

[TAIPEI] Taiwan is yet to receive an invite to a key World Health Organization (WHO) meeting this week expected to...

[LONDON] In 2010, friends told Kate Wilson that her ex-boyfriend and confidant Mark Stone, whom she met at an anti-...