Vivien Shiaovshiao@sph.com.sg@VivienShiaoBT
In a clear signal that Singapore's economic growth is likely to be muted for the rest of 2019, the Ministry of Trade and Industry (MTI) narrowed its forecast range downwards to 1.5 to 2.5 per cent on Monday morning, from an earlier 1.5 to 3.5 per cent.
PHOTO: ST FILE

IN a clear signal that Singapore's economic growth is likely to be muted for the rest of 2019, the Ministry of Trade and Industry (MTI) narrowed its forecast range downwards to 1.5 to 2.5 per cent on Tuesday morning, from an earlier 1.5 to 3.5 per cent.

This comes as the economy saw growth of 1.2 per cent in the first quarter of 2019 - the lowest growth rate in almost 10 years. This was a notch lower than earlier estimates of 1.3 per cent and down from revised figures from Q4 2018. This was also below economists' expectations of 1.5 per cent. 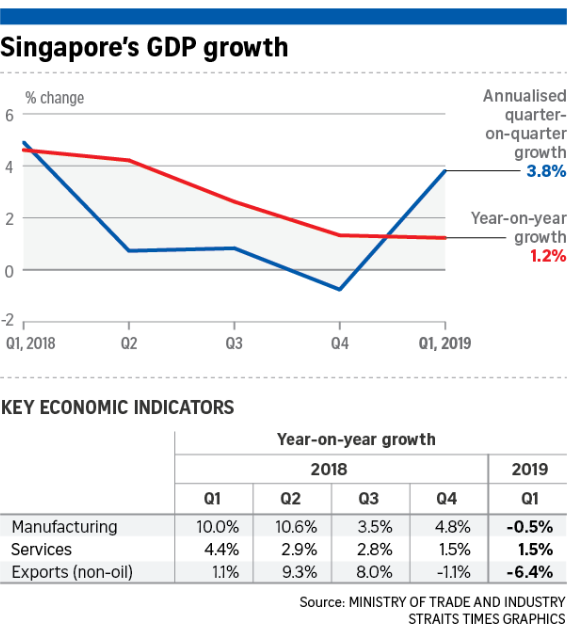 On a sequential basis, the Singapore economy expanded by 3.8 per cent, compared to the 0.8 per cent contraction in the preceding quarter.

Exporters close the book on a sorry 2019

In Q1, manufacturing slid by 0.5 per cent, reversing from the 4.6 per cent growth in Q4 2018. The sector was dragged down by the electronics and precision engineering segments on the back of weak global semiconductor demand.

The services producing industries grew by 1.5 per cent, unchanged from the previous quarter. It was propped up by the information and communications, finance & insurance, and business services.

Construction saw a recovery, expanding by 2.9 per cent, compared to a 1.2 per cent decline in Q4 2018, thanks to an improvement in both public and private sector construction activities.

In its outlook for the year ahead, the MTI noted that the global growth outlook “remains clouded by uncertainties and downside risks”, including a slower-than-expected growth in the Chinese economy, escalation of trade tensions between the US and its key trading partners especially China, and a possible "no-deal Brexit" in Britain's withdrawal from the European Union.

Against this challenging external backdrop, key outward-oriented sectors in the Singapore economy are expected to slow, added the MTI.

The manufacturing sector is projected to see a sharp slowdown in growth. In particular, the electronics and precision engineering clusters are expected to face strong external headwinds from a sharper-than-expected slowdown in global demand for semiconductors and semiconductor equipment with the fading of the global electronics cycle.

Growth in outward-oriented services such as wholesale trade and transportation & storage is expected to ease in tandem with the slowdown in growth in key advanced and regional economies.

However, the MTI noted that there remains “pockets of strength” in the Singapore economy. In particular, the information & communications sector is expected to remain healthy, bolstered by firms’ robust demand for IT and digital solutions. The education, health & social services segment is expected to remain resilient, supported by the ramp-up of operations in healthcare facilities respectively.

Meanwhile, the construction sector is likely to see a sustained turnaround after three straight years of contraction, as the pickup in contracts awarded since the second half of 2017 should translate into construction activities in the quarters ahead.

US to screen passengers for new China coronavirus at 3 airports

Trump, EU chief to meet in Davos as US tariffs loom over digital tax: sources

Trump warns Iran's supreme leader to be 'careful with his words'