Vivien Shiaovshiao@sph.com.sg@VivienShiaoBT
Singapore's economic growth next year is likely to ease from the pace recorded this year, weighed down by moderating global demand for electronics and the impact of the ongoing trade war.
PHOTO: ST FILE

SINGAPORE'S economic growth next year is likely to ease from the pace recorded this year, weighed down by moderating global demand for electronics and the impact of the ongoing trade war.

In its first official forecast for next year, the Ministry of Trade and Industry (MTI) on Thursday projected that the economy will grow by between 1.5 and 3.5 per cent in 2019.

The weaker outlook was no surprise to private-sector economists; many have released lower growth projections for next year on the back of stronger external headwinds.

Among them is OCBC economist Selena Ling, who expects a "more challenging growth trajectory" next year on the back of a slowdown in the US economy and more subdued global demand conditions.

At the same time, the MTI has narrowed the full-year forecast for this year upwards to between 3 and 3.5 per cent, from a broader range of 2.5 to 3.5 per cent, now that the results of the first three quarters are in the bag.

The latest third-quarter economic data revealed that Singapore grew at a slower pace of 2.2 per cent, falling short of economists' estimates of 2.4 per cent, as the manufacturing and services sectors disappointed.

The figure was also revised downwards from advance estimates of 2.6 per cent and is much lower than the growth of 4.1 per cent of a quarter ago.

But the weaker performance in the second half of the year is still in line with the government's expectations and has been accounted for in the forecasts, given the anticipated slowdown in Singapore's key demand markets such as the US and China, said the MTI.

In Q3, growth was mainly supported by finance and insurance, manufacturing and the business-services sectors.

The manufacturing sector, a key growth driver since last year, grew by only 3.5 per cent in Q3, moderating from the 10.7 per cent in the previous quarter.

Services, which makes up two-thirds of Singapore's economy, expanded by 2.4 per cent, down from the 2.8 per cent growth in the previous quarter.

Construction continued to contract, declining by 2.3 per cent due to weakness in public-sector construction activities. But this was a slower decline than in the previous quarter, when the sector shrank 4.2 per cent. 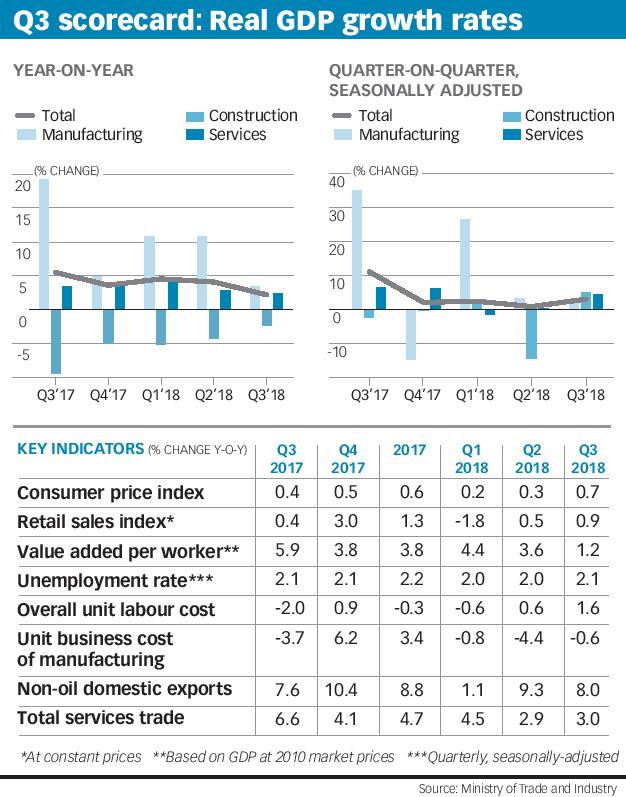 However, DBS economist Irvin Seah pointed out that sequentially, growth momentum improved over that of the previous quarter.

On a quarter-on-quarter seasonally-adjusted, annualised basis, Singapore's economy grew 3 per cent, faster than the 1 per cent in the preceding quarter.

He said that this underscores "some degree of resilience in the economy".

But Mr Seah, too, has his reservations: "There are concerns regarding the risk aversion and faster-than-expected hikes in interest rates causing excessive volatilities in the financial markets, and the property-cooling measures weighing down on the real estate and construction sectors in the coming quarters."

He added that a trade war could also "add salt to wound" in the near term.

Dr Tan Khay Boon, a senior lecturer at SIM Global Education, noted: "With only a month left and with the year-end seasonal strong demand, Singapore should be able to end 2018 with reasonably decent growth of at least 3 per cent."

But he believes that there will be downward adjustment of the forecasted growth next year, in view of the uncertainties created by the trade war.

"The warning lights have not turned red yet, but are flashing amber," they said. "Singapore's economy is feeling the tremors from a slowing global economy and disruptions to global trade."

Looking ahead, the MTI said the external demand outlook for the Singapore economy next year appears slightly weaker than for this year, and risks in the global economy are "tilted to the downside".

Key risks include a further escalation of the ongoing trade conflicts between the US and its key partners, which could trigger a sharp fall in global business and consumer confidence.

"Should this happen, global investment and consumption spending would decline, with adverse impact on economic growth," warned the MTI.

The second risk is a faster-than-expected tightening of global financial conditions, which could lead to capital outflows from emerging markets, potentially resulting in spillover effects on the rest of the region.

For 2019, the MTI expects the main growth driver of the economy to shift from manufacturing to services, as the electronics cycle has reached its peak after two years of robust growth.

However, growth in outward-oriented services sectors such as wholesale trade, transportation and trade and finance and insurance are projected to slow down in tandem with slowing global growth.

Other services sectors such as information and communications and education, health and social services are expected to remain "resilient".

On a brighter note, the MTI expects the languishing construction sector to see an improvement in 2019. There is likely to be a pickup, since those contracts awarded from the second half of 2017 are likely to translate into construction activities in the next few quarters.

For the art collector with everything, the US$1.5m Covid mask

[MOTZA] Art rather than ostentation is the rationale behind the world's most expensive coronavirus mask, say the...

[BEIJING] China's jewellery group Kingold Jewelry said on Wednesday it is to voluntarily delist from the Nasdaq...

ARUNA, a startup operating in the marine and fisheries industry, has raised US$5.5 million in a Series A round from...